Since last August, all newborns in California have been screened for a deadly immune disorder as part of a pilot program, but a newly introduced state assembly bill would make this screening routine.

About a dozen infants are born in California each year with the disease, called severe combined immunodeficiency (SCID). Screening enables the diagnosis and treatment of stricken infants before infections kill them.

At a Feb. 14 press conference that included UCSF pediatrician Jennifer Puck, MD – as well as one of her young SCID patients and the patient’s mother – California Assemblyman Richard Pan, MD, (D-Sacramento) announced the introduction of the bill, AB 395.

In May 2010, US Secretary of Health and Human Services Kathleen Sebelius endorsed the recommendation of a federal advisory committee and called for the inclusion of SCID testing in newborn screening panels. California, with 10 percent of the country’s newborns, began its pilot program began within three months of that endorsement. Prior to 2010, Wisconsin and Massachusetts began screening newborns for SCID on a trial basis.

Puck, from the Department of Pediatrics and the Clinical and Translational Science Institute at UCSF, had nominated SCID for inclusion in the newborn screening disease panel. She submitted evidence to the federal advisory committee from her research on the cost effectiveness of screening, and from the screening method she pioneered in 2005. Puck’s method, now adapted to large-scale screening by state laboratories, uses the same sample – dried blood spotted onto filter paper – already used for other newborn screening tests.

The California Department of Public Health has already demonstrated its effectiveness.

“I think we are picking up babies who would have been missed, and I know we are picking them up earlier,” Puck says. “The incidence of SCID in California based on the statewide pilot study is about one in 35,000 births, which is more common than our estimates before we started screening.” The pilot program has been funded by a combination of grants, philanthropy and development funds. The legislation proposed by Pan would establish a policy of routine screening.

Babies born with SCID lack the immune cells known as lymphocytes. Lymphocytes are the advanced fighting forces of the immune system. Each lymphocyte targets a specific disease pathogen. There are lymphocytes for essentially any infection one might encounter. Infants with SCID often die from infections, including some that rarely afflict babies with healthy immune systems.

All cases of SCID are due to mutations in immune system genes. Most cases arise sporadically. Babies born with SCID appear normal, and initially are protected by antibodies transferred from their mothers. The antibodies help fight infections in all infants during the first months of life as a baby’s immune system matures. 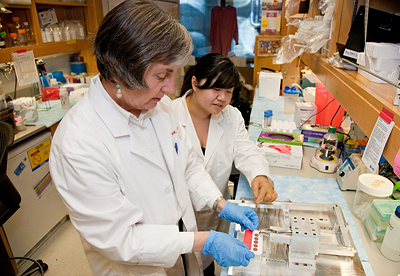 Healthy babies come down with infections as their immunity is being built up, Puck says, but babies born with SCID cannot handle their infections adequately. Eventually parents and doctors may notice that infections are more frequent and persist longer than usual. However, SCID is rare, so accurate diagnosis and treatment may be delayed until it is too late.

“There’s a good reason to screen for SCID,” Puck says. “It’s treatable if you find it early, and treatment is much more successful if you do it early rather than late.” Infections can be fatal before or after diagnosis. Without screening, four out of five cases of SCID are identified only after an infant begins to suffer from severe infections, Puck says. “By the time babies are diagnosed they often are in very serious trouble,” she says.

Puck has a long history of SCID discoveries. In the 1990s her group was one of two that identified the gene that causes the most common form of the disease, called X-linked SCID, which affects only boys. Although there are many different genetic causes of SCID, the cost-effective test developed by Puck is not limited to detecting only one or a few of them. Instead it detects evidence pointing to a lack of lymphocytes.

Lymphocytes make receptors keyed to unique molecules made by foreign disease agents. The receptors appear on the outside surfaces of T lymphocytes. They also are secreted by B lymphocytes as antibodies. To generate a sufficient repertoire of receptors, lymphocytes have to recombine bits of DNA to generate unique gene combinations that encode receptors for each unique pathogen the body might encounter.

To accomplish this task the developing lymphocyte splices together components from distinct receptor-gene regions. Each region contains many choices from which to select, but only one module is used from each. The number of unique receptors – and uniquely targeted lymphocytes – that can be generated by these recombinations is immense.

The leftover pieces of DNA that are cut out of the chromosome, but that are not used in the lymphoctye’s finished receptor gene, are joined together to form a circle. This circular DNA is stable, because the enzymes that chew up DNA work from free ends of linear DNA strands. “We know these circles are hanging around and can be counted,” Puck says. “I thought we could figure out a way to count them in dried blood spots.”

Puck used a standard laboratory technique called the polymerase chain reaction (PCR) to amplify and detect the circular DNA that had been isolated from the filter spots already obtained for screening for other newborn disorders. To drive amplification and detection she used primers with DNA sequences matching the DNA that spans the joint where the ends of unused linear strands of DNA have come together to form a circle. With this PCR test the circles are easily detected in dried blood spots from babies with normal lymphocytes.

When the screening test fails to detect the circles, follow up begins with more thorough blood tests and referral to an immunologist with SCID expertise. Tests are available that can identify specific genetic causes of the disease. “Different genetic causes of SCID call for different treatment approaches,” Puck says. Babies with SCID often receive a bone marrow transplant to reconstitute a healthy immune system. UCSF is among the transplant centers with expertise in performing transplants for immune deficiencies, Puck notes.

SCID still is sometimes referred to as Bubble Boy disease, in reference to David Vetter, who was placed in a germ-free enclosure at birth after his parents had lost their first son to SCID. His ordeal was covered by the news media, and his life became the subject of a made-for-TV movie. He died of an infection at age 12 in 1984. Vetter had recently received a bone marrow transplant, which had not yet restored his immune function.