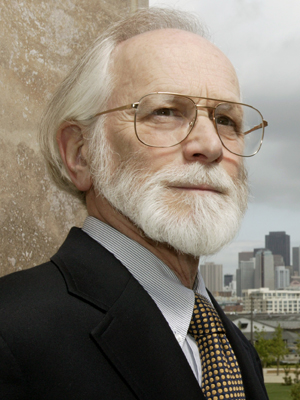 Nobel laureate J. Michael Bishop, MD, chancellor emeritus of UCSF and professor in the Department of Microbiology and Immunology and director of the G. W. Hooper Foundation, a biomedical research unit at UCSF, will receive Research! America’s 2011 Raymond and Beverly Sackler Award for Sustained National Leadership on March 15.

Research!America is the nation’s largest not-for-profit public education and advocacy alliance working to make research to improve health a higher national priority. The award honors Bishop’s decades of tireless advocacy for medical research as the future of better health and for his efforts to improve the public understanding of science.

Bishop led UCSF for 11 years, steering the health sciences university through one of its most expansive periods of growth and achievement, which included development from the ground up of a second major campus at UCSF Mission Bay, establishment of innovative research programs, and record philanthropic support.

He joined the UCSF faculty in 1968 and in 1981 assumed the additional post as Hooper director. Bishop was named UCSF chancellor in February 1998. Since 2004, he also has held the Arthur and Toni Rembe Rock Distinguished Professorship. While serving as chancellor, Bishop continued to teach medical students and run his distinguished research lab.

In 1989, Bishop was awarded the Nobel Prize in Physiology or Medicine with Harold Varmus, MD, for the discovery that growth regulating genes in normal cells can malfunction and initiate the abnormal growth processes of cancer. Bishop has received numerous prestigious awards in addition to the Nobel Prize, including the Albert Lasker Award for Basic Biomedical Research and the 2003 National Medal of Science.

A Legacy of Leadership

Under his leadership, UCSF built and opened its innovative Mission Bay campus with state-of-the-art biomedical research facilities. He continues to teach medical students and supervise a research team at UCSF studying the molecular pathogenesis of cancer.

While Bishop was best known for his pioneering research as a cancer scientist before he assumed the helm of UCSF, his road to leadership began years before he became chancellor. In the 1970s, he led development of the Program in Biological Sciences which established a single interdisciplinary doctoral and postdoctoral program that spanned UCSF departments. The concept revolutionized the way UCSF teaches and conducts research, and fostered the collaborative spirit for which UCSF today is distinguished worldwide. He also was, and remains, a vigorous advocate for science education and increased public investment in scientific research.

Bishop will be honored at the Annual Research! America Advocacy Awards on March 15 in Washington, DC. The 2011 Advocacy Awards represent Research!America’s 15thyear of recognizing the accomplishments of leading advocates for medical and health research.