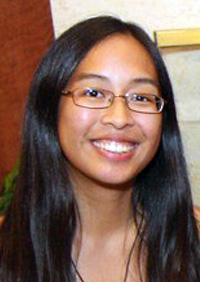 UCSF School of Pharmacy student Madalene Mandap, who co-chairs the LGBT Student Association, recently won the grand prize in a US Centers for Disease Control (CDC) and Prevention’s video competition for best video combating the flu. The video, titled “You vs. the Flu”, features Mandap’s parents and second-year pharmacy student Kaelynn Wang.

What are you studying at UCSF, and why did you choose to pursue a graduate degree here?

I am a third-year student in the School of Pharmacy.  I am about to start rotations in the Pharmaceutical Care Pathway, where I will train in various clinical, ambulatory care and community practice settings.  Before pharmacy school, I worked for four years as a quality control chemist in LA.  I chose to pursue a PharmD degree because I wanted to be able to use science in a way that more directly serves my community.  UCSF was my top choice because of the caliber of the program and their genuine concern for patient care.  Plus, San Francisco is such a vibrant, diverse and open-minded city.  I love it!

What is your favorite thing about being a pharmacy student?

The mentorship and support systems are top-notch.  Various faculty advisors have inspired me and have armed me with the confidence I needed to be creative and to pursue my passions.  To name a few, Drs. Robin Corelli, Christie Robinson, and Heidemarie Windham in the School of Pharmacy and Shane Snowdon, director of the LGBT Resource Center, have all been key to my professional development here at UCSF.  It is such an honor and inspiration to have been advised by such great people.  Also, the support I’ve received through my pharmaceutical fraternity has been immense.  I have never felt more comfortable letting my creativity run free than here at UCSF.

What’s something that members of the UCSF community would be surprised to know about you?

While studying abroad in Italy, I considered quitting college to just live there.  I really fell in love with the language, the culture, the food, the people and the history.

What inspired you to enter “The Flu Ends with U” video competition?

I was one of the project coordinators for Operation Immunization, a project of APhA-ASP (American Pharmacists Association – Academy of Student Pharmacists) at UCSF.  Aside from volunteering in numerous flu shot drives, such as the annual one at UCSF, the group is dedicated to educating the public about the importance of vaccinations in preventing disease.  One of the current OI coordinators Kaelynn Wang, second-year pharmacy student, saw the competition on the CDC website and forwarded it to me.  We’ve worked together on video projects before; she was actually the supporting actor in this one.  I was excited to use my newfound interest in video-making for something that has been important to me during my time here.

How did you decide to use your parents in the video?  Were they surprised you won?

I applied some principles that I learned from the book “Made to Stick,” recommended to me by one of my mentors, Dr. Mike Negrete.  Specifically, I wanted to incorporate a familiar story and voice – someone that people could identify with easily, and to throw in something unexpected.  I thought my mom fit the bill exactly.  She’s not playing a character – she really does love to cook, and she has the sense of humor to play along with the silliness.  Using my parents in the video was also a matter of convenience.  I was home in Barstow for my high school reunion a few days before the submission deadline.  It was all very last minute.  When I told them I had won, they were shocked.  They thought I was just making the film for fun, to “put on Facebook.”  They had no idea it was a national competition.

Why do you think the video is effective in motivating people to get flu shots?

I think the video stands out because it gives the audience a real, likeable character in the middle of an everyday activity… a working mom who loves to cook and spend time with family and who doesn’t have time to get sick.  I wanted to focus on positive-reinforcing reasons for getting the flu shot.  It’s easy to imagine the benefits of preventing the flu when put in that context.  It’s nothing fancy – no distracting special effects.  It is succinct, funny, and it gets the point across without being patronizing.  I had originally envisioned it as part of a series of videos spotlighting people of diverse backgrounds and their everyday reasons for getting the flu shot.

What did you win, and what will you do with the prize money?

The Grand Prize for the winning video was $2,500, and the results were announced on the CDC’s flu website.  I have already donated some of it to the Pharmacy Foundation of California’s medication safety outreach efforts and Lyon-Martin Health Services.  I plan on donating to my old project Operation Immunization.  I also plan on spending a good amount of it at the annual School of Pharmacy Spring Auction on May 26, the proceeds of which benefit all School of Pharmacy community service projects.  Finally, I want to upgrade my ancient phone to an iPhone, onto which I will upload drug reference tools to use on rotations.