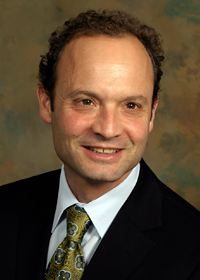 Type 1 diabetes worsens over time – but like most marriages, it starts with a honeymoon.

In type 1 diabetes the honeymoon follows diagnosis. The disease is caused by the loss of insulin-secreting beta cells in the pancreas. Type 1 diabetes can arise at any age, although it often is associated with youth. About half of cases arise in childhood or adolescence.

The honeymoon, or remission phase, refers to the period following initial diagnosis when the remaining insulin producing beta cells are functioning well. During this honeymoon, it is easier to control blood sugars, with fewers swings, less risk for hypoglycemia, and lower overall average blood-sugar levels.

Stephen Gitelman, MD, who leads clinical trials of new treatments for the UCSF Diabetes Center, would prefer to see the honeymoon never end. His goal is a marriage between newly diagnosed patients and new treatments that could keep type 1 diabetes under control forever.

Gitelman, director of the UCSF Pediatric Diabetes Program, is enrolling patients in new clinical trials. Among them is a first-in-humans evaluation of a treatment in which a specific type of cell found in the patient’s own blood, will be removed, purified and grown up in the lab, and then infused back into the patient.

“The idea of intervening in new ways at this early stage has really exploded,” Gitelman says.

Since 2000, the UCSF Diabetes Center has rapidly accelerated the pace of research and clinical care in diabetes, including playing a significant leadership role in TrialNet, a research program dedicated to the discovery of new therapies to delay, or prevent, the onset of type 1 diabetes in at-risk individuals. Gitelman serves as UCSF's study director for TrialNet, a consortium of investigators from 18 of the leading diabetes institutions around the world.

Many Beta Cells Are Alive at Time of Diagnosis

Type 1 diabetes arises when the immune system mistakenly attacks beta cells within the pancreas. These cells make and secrete insulin, a hormone needed to control the body’s use and storage of sugar.

The patient can thank surviving beta cells for the honeymoon period. When the disease is first diagnosed, usually the remaining beta cells in the pancreas are sufficient to release enough insulin to tightly control glucose levels in the bloodstream —with a little bit of help from injected insulin. The principal is similar to the way a thermostat maintains the temperature in a house — if the blood sugar drifts up a little bit, then the beta cell releases enough insulin to bring it down into range, and if the glucose drifts down, then insulin secretion turns off. It is very hard to mimic such exquisite control with current diabetes therapies, Gitelman says.

“At the time of diagnosis the patient typically has from 15 percent to 40 percent of normal beta-cell function,” Gitelman says. “The length of the honeymoon is often inversely correlated with age at diagnosis. For most teens it lasts from one to two years. But five years from diagnosis many of them still produce a clinically significant amount of insulin.”

To maintain normal blood glucose, the patient must monitor blood sugar at least four times daily, according to Gitelman. The patient must figure out precisely how much insulin to take on multiple occasions each day, based on food intake and exercise. The daily grind of diabetes self-management begins to hit full force, often at an age when few are accustomed to being so burdened with such cares.

Gitelman is now testing new treatment strategies in clinical trials. The aim is to keep remaining beta cells from dying in children and young adults recently diagnosed with type 1 diabetes – and to preserve the body’s own insulin-controlling biofeedback.

Patients would still take insulin, but blood-glucose levels could be much more tightly controlled. That in turn would avert medical emergencies due to abnormally spiking or falling sugar levels. Tight blood-glucose control in type 1 diabetes also has been shown to be important in lessening the risk for long-term, potentially life-threatening complications and organ damage that can develop years after diagnosis.

During the honeymoon period, Gitelman says, “Even if you are on supplemental insulin, you tend to have better overall blood sugar control. Your blood-sugar averages are lower. There are less severe swings in blood sugar, and there is a lower risk for severe hypoglycemia. It really would be very beneficial if we could keep the remaining beta cells alive and functioning.”

New trials are underway at UCSF for type 1 diabetes patients who are within two years of diagnosis. Each is aimed at reining in the autoimmune attack on beta cells. A related trial that is just getting started is a prevention study. The researchers aim to stop beta cell destruction in high-risk individuals identified by screening relatives of those who are diagnosed with the disease.

In this first prevention trial Gitelman is targeting immune cells that attack beta cells. He is evaluating a humanized form of a monoclonal antibody directed against the cell-surface protein called CD3. Humanized antibodies are expected to have fewer side effects than antibodies developed from animals. The CD3 protein is a marker found on the T cells that attack beta cells in type 1 diabetes.

Jeffrey Bluestone, PhD —former director of the UCSF Diabetes Center and now executive vice chancellor and provost —first spearheaded the development of anti-CD3 antibodies for diabetes a decade ago. The study is open to at-risk individuals ages eight to 45.

In a multi-center clinical trial aimed at tweaking the immune system with antibodies, Gitelman and other clinical investigators will evaluate an antibody treatment derived from rabbits, called anti-thymocyte globulin (ATG). The trial is open to recently diagnosed patients from the ages of 12 to 35. The treatment actually includes a mixture of antibodies, raised against T cells from the thymus gland.

Researchers are hoping the antibody knocks out destructive T cells and permits non-destructive T cells to take their place. The treatment, with the brand name Thymoglobulin, has been approved by the US Food and Drug Administration (FDA) as a treatment to prevent organ rejection in kidney transplant patients, for whom it has become a standard treatment. Thymoglobulin also has been used to treat other autoimmune diseases.

In a third clinical trial Thymoglobulin will be combined with granulocyte colony-stimulating factor (G-CSF), sold as Neulasta. Neulasta, known generically as pegfilgrastim, causes immature cells in the bone marrow to mature and to activate. It is FDA approved as a standard treatment to boost white blood cell counts in patients receiving cancer chemotherapy. In mouse models of diabetes, this combination appears to be even more effective than Thymoglobulin alone in curing diabetes, Gitelman says. This clinical trial is open to individuals ages 16 to 45, who also are within two years of diagnosis.

Among the ranks of immune system cells, there are T cells that attack, and there are other T cells that help call off the attack. One new treatment strategy, also pioneered by Bluestone — involves bolstering the performance of the immune system’s regulatory T cells, or “Tregs.” These cells put the damper on immune responses so they don’t go on indefinitely. The goal is to end the mis-directed immune system attack on beta cells by immune cells that include “effector” T cells.

The aforementioned antibody treatments may act by bolstering Tregs, Gitelman says. By using Tregs directly, side-effects of other treatments might be avoided.

The trial is open to newly diagnosed patients between the ages of 18 and 35. The treatment is developed from the patient’s own tissue – each will provide a pint of blood. The subset of Tregs will be purified from this donated sample, and then grown up in the laboratory.

Amy Putnam, a scientist who works in Bluestone’s lab, developed a protocol for purifying and stimulating the expansion of a patient’s Treg cell population 1,500-fold over two weeks. With this procedure Tregs maintain the potential to serve as a unique therapy to curtail the destructive immune response against the body’s own cells.

Unlike insulin, the Treg therapy is not meant to continue throughout life. Once the immune system learns to tolerate beta cells, the remainder will be spared and there will be no need to continue treatment, Gitelman says.

“We are hoping that the treatment resets the immune system and that the change remains when the treatment ends — a process known as tolerance.” In other words, the hope is that the progression of the disease will stop.

Success in Adults Would Lead to Studies in Children

These studies won’t provide answers overnight. Patients in the prevention study will be monitored for five years or more. In already diagnosed patients it will take at least six to 12 months before researchers will be able to detect significant changes in beta-cell function. The key measure is how much insulin the pancreas can produce when challenged with the consumption of the laboratory version of a milk shake.

Changing levels of antibodies against beta cells are measurable in the blood, but do not predict response to therapy in people with diabetes, Gitelman says. And right now, there is no practical way to directly image changes in the beta-cell population within the pancreas. The researchers are working on other ways to assess the effects of treatment on beta-cell function – another gauge that could be used as an earlier predictor of long-term success.

In the meantime, existing treatments such as insulin are available. When diagnosed and treated, type 1 diabetes is not normally life threatening. For these reasons the most ambitious of these studies – the first-in-humans Phase 1 trial to grow and infuse a patient’s own Treg cells — is only open to recently diagnosed adults.

If methods to halt beta cell destruction prove safe and successful — and if researchers develop practical methods for identifying diabetes among at-risk individuals early on —then the emphasis will quickly shift to children who are losing beta cells but who currently remain undiagnosed until symptoms develop.

“Ultimately this is a disease of children,” Gitelman says, but for the most ambitious and aggressive treatments, he cautions, “We have to work with adults first.”