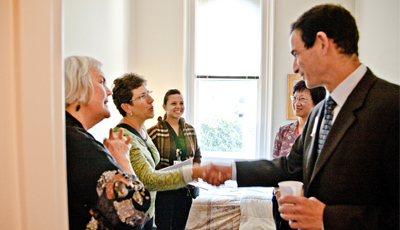 A shrine in the living room honors three past residents. An aging artist in the dining room watches a volunteer sculpt clay for her. In the kitchen, beef stew is simmering. On the patio, a single magnolia blossom has emerged.

On this Thursday in late January, the Zen Hospice Project Guest House in San Francisco is a peaceful and inviting place. But the entry requirement is daunting: a terminal diagnosis of six months or less.

Death is a big part of life in the renovated Guest House, which formed a partnership with UCSF Medical Center when it reopened in September after a six-year closure that provided time to comply with safety codes. Zen Hospice Project and UCSF are recognized for their leadership in end-of-life care. A contract guarantees that two beds are always available for UCSF patients.

“It has turned out to be a remarkable collaboration,” said Steven Pantilat, MD, director of the UCSF Palliative Care Leadership Center. “The links are very deep.”

Those links include B.J. Miller, MD, a UCSF palliative care specialist who is the new executive director of the Zen Hospice Project, and social worker Jane Hawgood, who first conceived of the partnership. In addition, UCSF residents, fellows and students do training rotations in the six-bed Guest House, a 19th century Victorian in Hayes Valley. 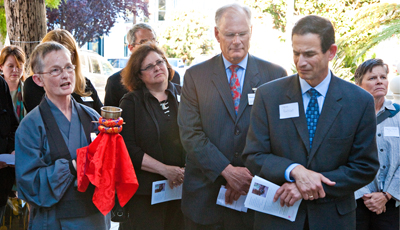 As of Feb. 1, the hospice had housed 17 people -- 11 of them from UCSF, according to Carlyle Coash, director of guest services. One afternoon they included a 93-year-old woman with dementia, a man in his 50s with HIV and a homeless person with liver cancer. Their housemates were a woman in her 70s with end-stage multiple sclerosis and a Zen priest, admitted at age 95 for “failure to thrive.”

“This might not be their own home, but we want to create an atmosphere that’s as close as possible,” Coash said. Although the Guest House is licensed as a residential care facility for the chronically ill, it feels more like a sanctuary, with a Buddhist sensibility and modern touches -- such as an elevator, access ramp and retracted sprinkler heads in the ceiling.

“Rather than looking at it as people who are dying here, people are really living here until they die,” said Roy Remer, who has trained more than 50 volunteer caregivers. “There's joy, humor, sadness and sensual delights -- food is very popular. And all the messiness of relationships comes up.”

“I was immeasurably enriched from the experience,” said Margaret Martin, executive director of the UCSF Medical Group, whose 67-year-old mother spent the final two weeks of her life at the Guest House before dying of lung cancer.

Residents can be as solitary or as social as they wish. When a death occurs, volunteers perform a ritual bathing with herbs, set up a shrine and sprinkle the body with rose petals.

As Remer described the process, a volunteer interrupted: “Lou just passed away.” He was referring to Louis Hartman, a 95-year-old Zen priest.

Suddenly, there was a lot to do. Sometimes, however, there is nothing to do: Palliative care takes many forms. 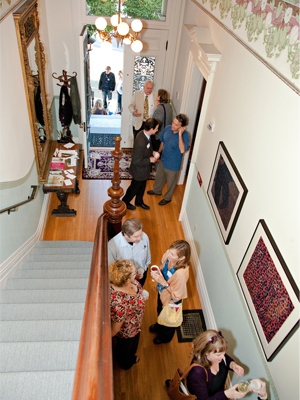 Guests arrive for the opening celebration of the Zen Hospice Guest House, which has a partnership with UCSF Medical Center that guarantees that two beds are always available for UCSF patients.

Pantilat mentioned “The Doctor,” an 1891 painting by Sir Luke Fildes, in which a physician sits at the bedside of a very sick child. “He’s not doing anything that we would call medicine,” Pantilat said. “No IVs, no antibiotics, no monitors, no blood pressure cuffs, nothing. But he’s doing something really important. He’s providing support.”

It’s a portrait of palliative care, a concept as old as medicine itself that began to enter the hospital world in the 1980s and is “incredibly recent,” Pantilat said, as a field of expertise.

Right now there’s a lot going on -- ranging from new Medicare regulations, which pay doctors who discuss end-of-life care with their patients, to an August article in the New England Journal of Medicine that found early palliative care improved quality of life and survival rates in lung cancer patients.

“With palliative care, it takes conversations to get people to think about what they want,” Hawgood said. “And often it’s just being a witness to people suffering rather than coming up with lists of things to do.”

She recalled one patient in the intensive care unit at UCSF who’d become despondent and worn down. Wasn’t there anything he wanted?, she asked. Finally, he confessed to a chocolate addiction. After he moved to a comfort care suite, he was given a brownie.

“He said, ‘Oh, my God, this is divine.’ He took little bites,” Hawgood said. “He kept asking for them, even when he couldn’t swallow anymore. He would smell them. There were just mounds of brownies in front of him when he died.”