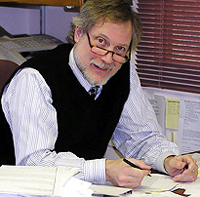 The annual award recognizes Duke University School of Medicine or house staff alumni for careerlong achievements in the theory and practice of medicine, and for leadership contributions at the community or national level.

In the 40 years since Miller earned his medical degree at Duke, he has made outstanding academic contributions in the area of translational research in endocrinology and the study of steroidogenesis.

He has studied the molecular biology of human steroid hormone synthesis, primarily by cloning genes and identifying mutations in genes that cause human disease. Such career achievements have earned him praise throughout the international pediatric endocrinology community.

Miller’s current broad research projects include the structure and function of the steroidogenic acute regulatory (StAR) protein, the post-translational regulation of androgen synthesis, and the nature of human cytochrome P450 oxidoreductase deficiency, which Miller’s group discovered in 2004.

In December 1979, while an assistant professor at UCSF, Miller experienced his first “eureka” moment in the lab.

The young researcher, whose experience included two years working in the US Public Health Service, became the first to clone bovine growth hormone.

The discovery had significant implications worldwide. Bovine growth hormone has subsequently been used to increase milk production in cattle, which has become an important part of the food supplies and economies of a number of countries, particularly in the Third World.

Miller has been responsible for other significant discoveries since cloning bovine growth hormone.

In the last 15 years, his lab has identified the genetic basis of eight different diseases.

He and his UCSF colleagues discovered a rare disorder called P450 oxidoreductase deficiency, discovered the basis of lipoid adrenal hyperplasia, cloned vitamin D-1α hydroxylase and showed that its mutations cause vitamin D-dependent rickets.

He attributes much of his success to being in the right field at the right time. He says he was fortunate to start his career at a time when recombinant DNA technology became a new driving force in biology.

Miller was named a fellow of the American Association for the Advancement of Science in 1994.

He is active in several professional societies, including the Lawson Wilkins Pediatric Endocrine Society and the Endocrine Society, which presented him with its Edwin B. Astwood Award in 1988 and Clinical Investigator Award in 2006.

His involvement with editorial boards includes serving as associate editor of DNA and Cell Biology, consulting editor of Clinical Pediatric Endocrinology, and an editorial advisory board member for Life Science Advances – Experimental and Clinical Endocrinology.