It takes songbirds and baseball pitchers thousands of repetitions – a choreography of many muscle movements—to develop an irresistible trill or a killer slider. Now, scientists have discovered that the male Bengalese finch uses a simple mental computation and an uncanny memory to create its near-perfect mate-catching melody—a finding that could have implications for rehabilitating people with neuromuscular diseases and injuries.

Young male Bengalese finches practice their boisterous mating song hundreds of times a day, comparing their melody to the songs of their tutors. By the time they are adults, they have zeroed in on a “successful” pitch for each note in their song. But throughout life they continuously monitor their tune, working to maintain it in the face of such factors as aging, hormone levels, muscular injuries, and illness. 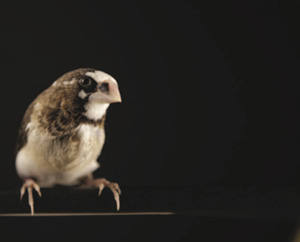 In their study, the UCSF neuroscientists explored the way in which the songbirds learn to perfect and maintain their song, a model of how one learns—and might relearn—fine motor skills when provided only simple reinforcement signals of success or failure.

In a series of experiments, they exposed the singing birds to a sound they did not like at the precise moment they were uttering a specific note, or syllable. After many exposures, the birds learned to alter the pitch of that syllable to avoid prompting the sound. But it was the way in which they did this that was remarkable.

The finches learned to change the pitch of a single note by computing the average pitch of hundreds of what they perceived as successful performances of that note – when they avoided hearing the unpleasant sound. The mental computation required the birds’ brains to remember every slight change in pitch of a single syllable sung perhaps 500 times in a day.

“We were very surprised that the brain can direct so complex a behavioral change with such a simple type of computation,” said the lead author of the paper, Jonathan Charlesworth, a UCSF PhD candidate in neuroscience in the lab of senior author Michael Brainard, PhD, associate professor of physiology.

The finding suggests “it might be possible to guide a damaged nervous system to recovery using only a simple automated/computerized system that emits simple instructive signals,” said Charlesworth.  “Given that the averaging rule was true even for subtle details of song, an automated therapeutic strategy could help people regain the intricate details of fine motor skills like playing the piano, articulating speech, or dancing.”

The phenomenon may explain how people learn to produce accents or subtle vocal and facial cues: a tilt of the head when we disagree versus the slight nod when we are in accord, Charlesworth said.

The research is reported as an Advance Online Publication this week (posted January 30, 2011) by the journal Nature Neuroscience and will appear later in the journal’s print addition.

For the study, the scientists developed a computer program that recognized the pitch of a single syllable each time a bird sang it. The computer was able to trigger a mildly disruptive short burst of sound at a specific time within that note – with a precision of about 1/100th of a second.

In one set of experiments, the computer program issued the short sound burst whenever the bird sang the target syllable at a pitch below a certain threshold.  Over the course of several hundred trials, the birds learned to change their tune enough to avoid the noise about 80 percent of the time.  Not every “successful” new pitch was the same; they didn’t have to be. They just had to be above the key threshold.

The researchers also presented the singers with another, more difficult task.  They programmed the computer to measure the pitch both near the beginning and the end of a single syllable. The computer only triggered white noise after the second measurement, and, critically, only if the bird sang the first part of the syllable below a certain threshold and the second part above a similar threshold.

The scientists found that the birds learned to avoid the noise by making a more pronounced “swoop” of sound—starting lower than normal and ending higher than normal.  This showed that the birds were able to keep track of the pitch both at the beginning and the end of a single tenth-of-a-second syllable.

“This precision confirms the view that we learn not only in response to external stimuli, but through the capacity for variation in our actions,” Brainard said. The nervous system, he said,  is constantly introducing variations into our actions and paying very close attention to the consequences of those variations.

“Even Michael Jordan was unable to shoot a free throw the same way each time, instead exhibiting subtle variation that resulted in many baskets but a few misses,” said Charlesworth. “This variation, while causing occasional misses, can be productive by allowing for learning in the case of changes to our body or environment.”

The experiments indicate, he said, that “even the very subtle variations that you might have thought were irrelevant, such as our annoying inability to throw a dart or break open a billiards rack the same way each time, can play a crucial role in shaping how we learn.”

The development of new behavior is akin to Darwinian evolution, but on a very short time scale, said Brainard. The bird creates a reservoir of varying behaviors – analogous to genetic variation—in response to changes in its environment.  The environment then selects for a specific new behavior—the new pitch – from the range of available variation.

As a result of the variation and selection, the bird learns to express a new adaptive behavior.  The development of new behavior can have “tag-along” consequences, producing new behavior that has no adaptive benefit, he said.  Influential behavioral scientist B.F. Skinner showed decades ago that pigeons randomly rewarded with food learned to associate the reward with whatever they were doing at the time—say fluffing their feathers. They then fluffed their feathers frequently, said Brainard, in hopes of summoning a reward.

Charlesworth and Brainard cited the well-known superstitious behavior of baseball players as an example of this tag-along potential in people.  Presumably, a coach’s habit of leaving his left shoe untied, or a pitcher always wearing a garnet ring stemmed from winning some key game at a time when they happened to be shoelace-challenged or bejeweled. But don’t try to explain to the coach or pitcher that there is no connection between the loose shoelaces or the bling.

The researchers now plan to study the brain regions associated with bird song learning, with hopes of finding how neurons generate variation in behavior and keep precise track of performance, as well as compute the averaging calculation that underlies learning.

Co-authors on the paper are Evren Tumer, PhD, a postdoctoral scientist in Brainard’s lab at the time of the research; and Timothy Warren, a PhD candidate in the lab.