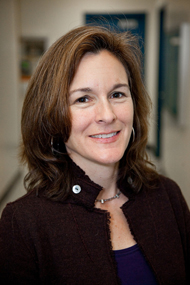 The bodies of virtually all U.S. pregnant women carry multiple chemicals, including some banned since the 1970s and others used in common products such as non-stick cookware, processed foods and personal care products, according to a new study from UCSF.

The study marks the first time that the number of chemicals to which pregnant women are exposed has been counted.

Bisphenol A (BPA), which makes plastic hard and clear, and is found in epoxy resins that are used to line the inside of metal food and beverage cans, was identified in 96 percent of the women surveyed. Prenatal exposure to BPA has been linked to adverse health outcomes, affecting brain development and increasing susceptibility to cancer later in life, according to the researchers.

Tracey Woodruff, PhD, Director of the UCSF Program on Reproductive Health and the Environment, speaks about the results of a study on chemicals in pregnant women published in "Environmental Health Perspectives."

The study was not designed to identify direct connections to adverse health outcomes.

“It was surprising and concerning to find so many chemicals in pregnant women without fully knowing the implications for pregnancy,” said lead author Tracey Woodruff, PhD, MPH, director of the UCSF Program on Reproductive Health and the Environment.

“Several of these chemicals in pregnant women were at the same concentrations that have been associated with negative effects in children from other studies.  In addition, exposure to multiple chemicals that can increase the risk of the same adverse health outcome can have a greater impact than exposure to just one chemical,” said Woodruff, an associate professor in the UCSF Department of Obstetrics and Gynecology and Reproductive Sciences.

Exposure to chemicals during fetal development has been shown to increase the risk of adverse health consequences, including preterm birth and birth defects, childhood morbidity, and adult disease and mortality according to the research team. In addition, chemicals can cross the placenta and enter the fetus, and in other studies, a number of chemicals measured in maternal urine and serum have been found in amniotic fluid, cord blood and meconium, they state.

The researchers analyzed data for 268 pregnant women from the National Health and Nutritional Examination Survey (NHANES) 2003-2004, a nationally representative sample of the U.S. population.

"Our findings indicate several courses of action. First, additional research is needed to identify dominant sources of exposure to chemicals and how they influence our health, especially in reproduction,” said Woodruff. “Second, while individuals can take actions in their everyday lives to protect themselves from toxins, significant, long-lasting change only will result from a systemic approach that includes proactive government policies.”

Co-authors of the study are Ami R. Zota and Jackie M. Schwartz of the Program on Reproductive Health and the Environment, UCSF Department of Obstetrics and Gynecology and Reproductive Sciences.

Funding for the study was provided by the Pew Charitable Trusts and a grant from the Passport Science Innovation Fund.