Ray and Dagmar Dolby this week donated $20 million to the University of California, San Francisco to provide funding for a stem cell building on the Parnassus Campus. In honor of their generosity, the building will be named the Ray and Dagmar Dolby Regeneration Medicine Building. 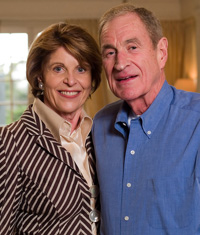 The steel structure, which opens officially on Feb. 9, 2011, will be the headquarters for the Eli and Edythe Broad Center of Regeneration Medicine and Stem Cell Research at UCSF, one of the largest and most comprehensive programs of its kind in the United States.

The architecturally unique building, constructed on a 65 degree slope, is designed to foster intensive collaboration and a cross-pollination of ideas among scientists representing a broad spectrum of labs and disciplines. The researchers’ goal is to develop strategies for treating a variety of diseases and conditions, such as birth defects, diabetes, heart disease, Parkinson’s disease, stroke, spinal cord injury and cancer.

At full capacity, the building will house 25 laboratories, serving as the headquarters of a program that will continue to extend across all UCSF campuses.

The donation is the Dolbys’ second gift to UCSF for this purpose. In 2006, they contributed $16 million, launching the university’s fundraising campaign for the $123.3 million structure. And prior to that, they donated $5 million to the California Institute for Regenerative Medicine (CIRM), helping the fledgling agency as it faced a delay in selling general obligation bonds to establish its stem cell research program, as authorized by Proposition 71. The delay was caused by litigation challenging the constitutionality of the measure, which was ultimately upheld.

“We are grateful to the Dolbys for their extraordinarily generous gift to UCSF,” said UCSF Chancellor Susan Desmond-Hellmann, MD, MPH. “Their support for the construction of a building that will host up to 25 of the country’s top labs is a significant contribution to the advancement of stem cell science. Their donations to UCSF and the field more broadly will be felt for decades to come.”

The Dolbys, who live in San Francisco, reflected on their gift. “Dagmar and I have had the opportunity to meet a number of the UCSF scientists who are leaders in stem cell research, and have been impressed by their vision and commitment to the field,” said Ray Dolby, founder of Dolby Laboratories. “The possibility that stem cells could someday be used to regenerate damaged tissues, and that they already are providing insights into the way cancer develops, offers great hope for those suffering with diseases and traumatic injuries. We’re glad we were able to help.”

The Ray and Dagmar Dolby Regeneration Medicine Building, designed by renowned architect Rafael Viñoly, is a series of four split-level floors with terraced grass roofs. Open labs flow into each other, with office and lounge areas located on the routes between labs, promoting interaction throughout the building.

The design, said Kriegstein, “is intended to allow scientists who normally wouldn’t be situated near one another to work side by side, with the goal of answering fundamental questions about the earliest steps of embryo and cell development – answers that are informing our efforts to develop treatment strategies.”

The idea for the building was conceived in 2004 by leaders of CIRM, who envisioned the creation of stem cell research facilities at universities throughout California. Following the Dolbys’ 2006 donation, UCSF received a highly competitive $34.9 million grant from CIRM in 2007. Then, in 2008, UCSF received a $25 million grant from the Eli and Edythe Broad Foundation. With the Dolbys’ most recent gift, UCSF has $12.5 million left to raise for the building.