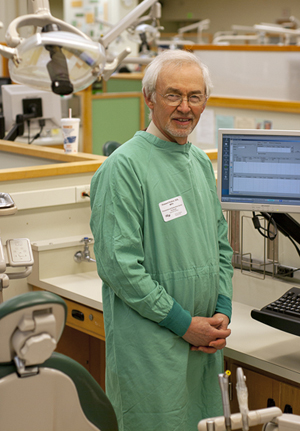 Howard Pollick
Two federal agencies announced on January 7 that they are exploring new guidelines for water fluoridation – and with good reason, according to the American Dental Association (ADA).
Fluoride helps prevent tooth decay, no doubt. In fact, many who get little fluoride from water could benefit from more. But especially for young children, it’s possible to take in too much – resulting in fluorosis.
Mild forms of fluorosis are increasingly common, according to the ADA, and cause teeth to become discolored, most often with white streaks. More severe cases can result in dark stains, cracking and pitting — leading to tooth decay.
“There’s a subtle amount of difference between what’s recommended and what’s too much,” says Howard Pollick, MPH, a professor of preventive and restorative dentistry at the UCSF School of Dentistry. Pollick also serves as a spokesperson on fluoridation for the ADA.
These days fluoride is in toothpastes and processed food, one reason for recommending less fluoride in water.
Fluoride – How Much Is Good?
Water sources naturally contain fluoride, but many contain less than sufficient amounts to help prevent tooth decay. Therefore most people in the US are supplied with public water that is fluoridated. Current public health guidelines call for fluoride levels of between 0.7 milligrams per liter and 1.2 milligrams per liter.
Recommendations varied according to daily temperature, with the rationale that people in hotter climates drink more water – a notion viewed as outdated in an era of widespread air conditioning.
The US Department of Health and Human Services now is recommending that fluoridation be pegged at 0.7 milligrams per liter –one standard for all.
Fluorosis Risk
The US Environmental Protection Agency (EPA) reanalyzed data on dental and skeletal fluorosis and concluded that severe dental fluorosis could become a significant risk at water levels above about two milligrams per liter. Bone and joint pain and other symptoms of skeletal fluorosis generally result only from much higher levels of exposure, according to the EPA report. 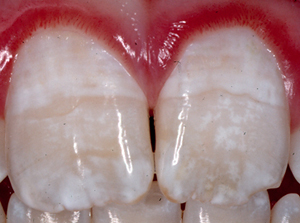 Dental fluorosis
There are many water districts that do not fluoridate water. Some water supplies have lower- or higher-than-recommended levels of fluoride. The naturally occurring maximum level of fluoride the EPA now allows in drinking water is now 4.0 milligrams per liter. The EPA now is reviewing the standards.
“Currently, there are more than a million people in the United States who have water supplies with two milligrams per liter of fluoride or more, which obliges the water districts to notify their customers and inform them that the water source is not suitable for children.” Pollick says. “There are about 200,000 people in the United States receiving more than four milligrams per liter.”
The San Francisco water supply is fluoridated, and the concentration of fluoride is 1.0 milligrams per liter, according to data available from the California Department of Public Health.
The two federal agencies stressed the importance of continuing to fluoridate water in their joint announcement last week, while noting the possible cumulative risks from exposure to all fluoride sources, not only water.
Water is the main source of fluoride for many
“There are some children for whom fluoride in the water is the main source because they may not be brushing their teeth with fluoride toothpaste on a regular basis,” Pollick says.
“There is some concern that the proposed change in recommended fluoridation levels might lead to an increase in tooth decay for that segment of the population. That would take years to become evident, and there will be ongoing monitoring and surveillance for tooth decay and dental fluorosis through the National Health and Nutritional Examination Survey, based on a representative sample of the US population.”
Fluoride from Toothpaste Adds Up
“I don’t think this is a major change,” Pollick adds, “but it’s based on the fact that we have these additional sources of fluoride that are somewhat more difficult to control.”
Pollick notes that toothpaste often is a significant source of fluoride for younger children who are most vulnerable to dental fluorosis.
“We have recommended since the early 90’s that only a pea-sized amount of fluoride toothpaste be applied to the toothbrush by a parent or caregiver – especially for young children, because they tend to swallow toothpaste. In fact, some of them like the taste so much they want more.
“Toothbrushing by young children should be supervised,” he says.
Pollick photo by David Hand, teeth photo by US Centers for Disease Control and Prevention