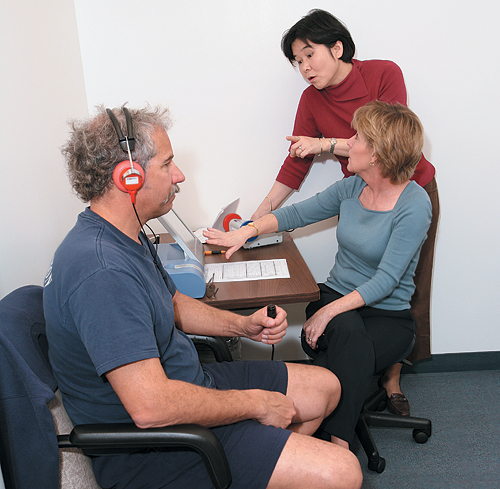 Nurse-scientists bring a unique perspective to the health sciences. The insights their research yields on everything from symptom management to public and occupational health have an enormous impact on the health of populations around the corner and all over the world.

In fact, faculty across the University are involved in and deeply committed to community engagement research, a core component of the campuswide UCSF Clinical and Translational Science Institute (CTSI).

Established in 2006 with more than a $100 million grant from the National Institutes of Health, the UCSF CTSI extends across all four schools - dentistry, medicine, nursing and pharmacy - and its Graduate Division. It is designed to create an enterprise that promotes research and education in translational and clinical science at UCSF, in partnership with its training hospitals, UCSF Medical Center, San Francisco General Hospital Medical Center, San Francisco Veterans Administration Medical Center - and its affiliated institutions, including the J. David Gladstone Institutes.

UCSF School of Nursing Dean Kathy Dracup, a longtime proponent of taking an interdisciplinary approach to research and teaching, described the importance of the CTSI at UCSF and to improving health.

“The CTSI’s emphasis on translational research is very important for the faculty and students in the School of Nursing,” she said. “Research programs of the majority of our faculty involve the translation of basic science to clinical care and prevention of illness. We are not only involved in the transfer of research from ‘bench to bedside,’ but also the transfer from ‘neuron to neighborhood.’ All of the efforts of the CTSI team have increased our abilities to collaborate across structural units and to gain in the synergy of talents brought to the CTSI.”

Here are just a few examples of how nursing school researchers are working collaboratively with individuals and communities that share a common interest in issues affecting their well-being.

Catherine “Kit” Chesla, RN, DNSc, Thelma Shobe Endowed Chair in Ethics and Spirituality and a professor in the Department of Family Health Care Nursing, is principal investigator of a four-year, community-based participatory research project to develop a behavioral intervention for Chinese immigrants with type 2 diabetes and their families.

In partnership with two community agencies in San Francisco’s Chinatown, Donaldina Cameron House and North East Medical Services, her team is taking nurse-developed behavioral skills training that has proven effective in patients with type 1 diabetes, and is adapting it to be culturally appropriate for Chinese immigrants with type 2 diabetes.

The training is made up of six group sessions with didactic presentations and skills practice that might help a person manage complex social situations in diabetes management, such as communication, problem solving and conflict resolution. The team will evaluate the effect of the training protocol on patient health, family relations and behavioral outcomes.

Shari Dworkin, PhD, an associate professor in the Department of Social & Behavioral Sciences, is working on two projects aimed at reducing HIV/AIDS among vulnerable populations.

The first seeks to better understand the mechanisms through which economic empowerment may work to reduce HIV/AIDS risks. Lack of economic empowerment can lead women and girls to participate in a variety of sexually risky situations: They are less able to negotiate safer sex with partners, they are less likely to be able to leave a violent relationship (also associated with HIV risk), and they are more likely to engage in the exchange of sex for food, clothing, school fees or household needs.

Dworking is also working to better understand the ways in which gender-transformative antiviolence and HIV/AIDS prevention interventions affect men in the southern Africa region.

Waters has three randomized, controlled trials in progress: one on cardiovascular health among young, low-income African American women; one on glycemic control in African Americans with type 2 diabetes; and one to increase physical activity and fruit and vegetable consumption among African Americans.

Mary White, RN, MPH, PhD, a professor in the Department of Community Health Systems, focuses on improving the health care and health care outcomes of incarcerated populations and those at high risk for incarceration, such as the homeless, injection drug users, the severely mentally ill, and new and undocumented immigrants.

Her work involves collaborations with medical and nursing personnel and officials in San Francisco and Santa Clara county jails and the California Department of Corrections and Rehabilitation.

Focusing on Health and Safety

Oisaeng Hong, RN, PhD, a professor in the Department of Community Health Systems and director of the Occupational and Environmental Health Nursing Program, focuses on health and safety in working populations, including underserved immigrant workers. She also studies noise exposure and health outcomes, as well as work-site and community-based behavioral interventions.

She is principal investigator of an Internet-based intervention to prevent hearing loss among firefighters, as well as one examining risk factors for hearing loss in older Mexican Americans.

Hong’s other community-based projects include examining the prevalence of smoking, alcohol and depression and performing a Web-based smoking cessation intervention in construction workers in Michigan, and studying community noise and health effects in San Francisco.

Howard Pinderhughes, PhD, associate professor and chair of the Department of Social and Behavioral Sciences, has been working to curb youth violence for years. His forthcoming book focuses on two community-based studies that examine how urban adolescents think about, experience and make decisions about the use of violence.

He is the founder of the People Respecting Other Peoples (PROPS) program, which trains students at San Francisco’s Mission High School to conduct basic research and use the results to improve relations among the many different racial and ethnic groups at the high school.

Pinderhughes also is the director of education and outreach and co-principal investigator of the Center on Culture, Immigration and Youth Violence Prevention, one of the Centers for Disease Control and Prevention’s (CDC’s) academic centers of excellence to address youth violence.

In addition, Pinderhughes works with the Prevention Institute on the CDC-funded Urban Networks to Increase Thriving Youth (UNITY) project, which helps the 45 largest cities in the United States develop and implement comprehensive violence prevention programs.

Glenna Dowling, RN, PhD, professor and chair of the Department of Physiological Nursing and director of the Institute on Aging Research, focuses on functional rehabilitation in people with chronic progressive neurological diseases and circadian and rest-activity rhythm disruption.

In partnership with Red Hill Studios, she recently received two NIH grants to adapt the popular Nintendo Wii platform to create therapeutic interactive games to improve functional gait and balance in people with Parkinson’s disease and children with cerebral palsy. This work is described in detail in a March 31 news release.

Dowling’s work also was highlighted in the video profile series, Voices, which is posted on UCSF diversity’s website.