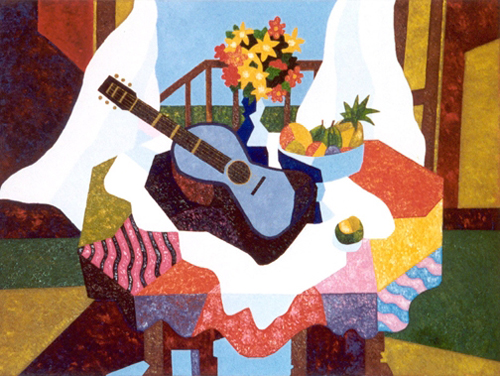 “Still Life” is an oil painting on canvas by Nannete Nemenzo.

While it can be a sensitive subject, the relationship between UCSF faculty and staff isn’t always easy breezy.

It’s not uncommon for employees of both categories to talk about working in two separate worlds; physically close but distant.

This is one reason why Mary-Ann Shafer, MD, vice chair of the Department of Pediatrics, and Nannette Nemenzo, a staff analyst in the pediatrics department, feel they have something so special going on, they want to share.

Nemenzo’s day job may be creating and coordinating educational materials for pediatricians in training, but she’s also an accomplished artist, whose paintings and prints play with shapes and bold, rich colors.

And Shafer, a specialist in adolescent medicine, runs a busy pediatrics training program, but she’s also a photographer – known for her colorful, emotional portrayals of nature and people.

In what’s believed to be the first-ever staff-faculty team art show, Nemenzo and Shafer’s works are displayed at the UCSF Faculty Alumni House through August. The house, located on the corner of Parnassus Avenue and 5th Street, is used for special events and meetings, and is decorated with rotating art works, usually with a UCSF link.

Nemenzo and Shafer believe their work compliments each other in an almost uncanny way. Both are drawn to the symmetry and vibrant colors of the natural world. Both have pieces that focus on women.

They’re pleased to have the opportunity to display their creative pursuits, but they’re also drawn to the opportunity to share a staff-faculty relationship that defies compartmentalized expectations, they said. The art show is an extension of their collaborative working relationship, they said, adding they hope it inspires others. Money raised from the show will be donated to pediatric research at UCSF and in Kolata, India, where Shafer was a visiting professor in 2009.

“There’s a partnership between us and I don’t feel that’s common here, where there can be deep divisions between staff and faculty,” Nemenzo said. “How do you build a bridge? This show is an ideal way.” 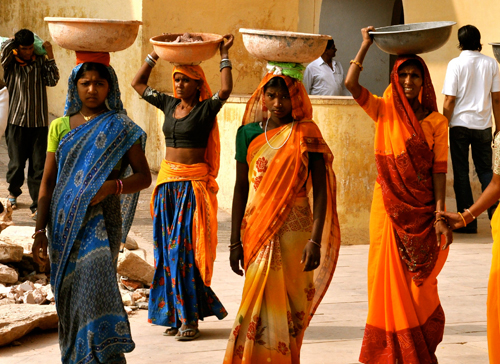 Mary-Ann Shafer’s photograph called “Laboring Beauties” was captured in a very crowded square of a small village in the Golden Triangle area of India.

The colleagues realize that not all staff and faculty can bond over art. But with an open mind, commonalities may be found, Shafer said. “I think it shows you should look at each others talents beyond the job descriptions. You should get out of the little boxes people put you in at UC. Here we’re artists.”

The idea for the show is attributed to Mary Conn-Fitch, director of the Faculty Alumni House, and its self-described curator. Conn-Fitch, who has a background in the arts, presents about four art shows a year at the stately corner home, which was built in 1927 as a fraternity for dental students. The art is backdrop to the events held at the house, which is rented to staff, faculty, and others with a UCSF affiliation.

Conn-Fitch got to know Shafer and Nemenzo through the many pediatric fellow training sessions they hold at the house, eventually learning of their artistic sides. She’d see Shafer, who tends to tote her camera wherever she goes, snapping shots of the house gardens in various states of bloom. She became familiar with Nemenzo’s extensive portfolio, which includes various drawings of flowers in bloom.

Pairing their work in a show seemed natural, Conn-Fitch said. “They work together so well as a team. Watching them interact has been a pleasure.”

Shafer considers herself a hobby photographer, and wasn’t sure anyone else would enjoy her work. Conn-Fitch and Nemenzo convinced her otherwise.

Soon the three were busily selecting what should go where. “We were interested in colors and textures that matched,” Shafer said. “A lot of it is around women—a women’s theme.”

Nemenzo described their work as “intertwining.” 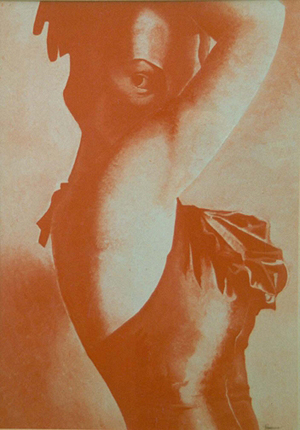 Nannette Nemenzo’s “Lady in Red” is made of acrylic on a cold press illustration board.

A striking example of this is found on what they’ve nicknamed “The Women’s Wall,” where a dark-eyed woman in a bold red dress peers out almost sadly from behind her shoulder, in a Nemenzo acrylic called “Lady in Red.”

“Like all art forms, I use the medium to try and tell a story—to recreate a certain mood or atmosphere, to capture a particular moment or to explore the ideas of space and color,” Nemenzo says of this piece. “I use the human figure because I believe that people can relate to it, which develops a dialogue between the art and the viewer.”

Next to this is a collection of photographs Shafer took in India and Nepal of serious-eyed women in bright saris, peering out from their head coverings. One of the photographs, “Laboring Beauties,” was captured in a very crowded square of a small village in the Golden Triangle area of India.

“It represents all of the things that women are supposed to do and the complexities of their roles: beauty, art, hard labor, sadness, joy, solitude, slaves to societal norms,” Shafer notes.

The show brings interesting role reversals, Conn-Fitch noted. “Nannette is the more experienced artist, and it’s kind of nice having her direct her boss.”

Nemenzo, who studied commercial art at the San Francisco Academy of Art University, and spent years as an arts administrator, has worked at UCSF for five years. She’s skilled in multimedia and computer graphics. 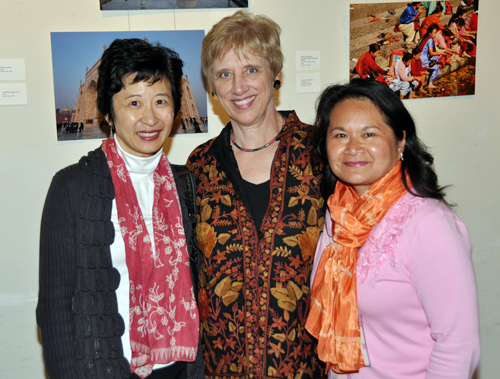 From left, Lettie Lung, a visiting professor, Mary-Ann Shafer and Nanette Nemenzo enjoy a reception for the artists at the UCSF Faculty Alumni House.

Nemenzo’s parents were both scientists trained at UCSF, and they expected her to follow in their footsteps, she said. But sketching and drawing were a stronger lure. Her family background makes her feel at home in medicine, she said. An immigrant from the Philippines, Nemenzo’s art is influenced by her cultural background.

Shafer, a professor at UCSF for 32 years, has a research background in STD’s, heads a number of professional development programs for fellows and early faculty, and is the associate director for Training in the Division of Adolescent Medicine. She has two daughters; an artist and an educator. She and Nemenzo have developed extensive training materials for fellows, much of which is online. A passionate global traveler for work and for pleasure, Shafer’s photographs include provoking images of India, Nepal and Kuala Lumpur.

Both women talk of the soothing counterbalance their art provides to the demands of a major university. “I really enjoy my job. I’m the classic academic, researcher-clinician- teacher,” Shafer said. “The art part – being a photographer is relaxing. It pushes me in a whole different place. It literally fills me back up.”