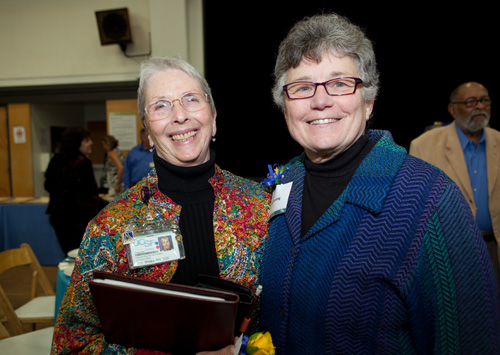 Zina Mirsky and Dixie Horning show their happiness upon receiving chancellor’s awards at the Founders Day luncheon on May 21.

Chancellor Sue Desmond-Hellmann, MD, MPH, joined members of the UCSF community to honor outstanding service to the public, patients and the University during the 2010 Founders Day Luncheon on May 21.

Dixie Horning, executive director of the UCSF National Center for Excellence (CoE) in Women’s Health, who received a public service award, brought the crowd to its feet in one spirited moment when she asked everyone to join hands in celebration.

“I think you have a future career as a preacher,” Desmond-Hellmann told Horning.

During the annual feel-good event, the following members of the UCSF community thanked their families, friends and colleagues for their support as they received these awards in Millberry Union Gymnasium: 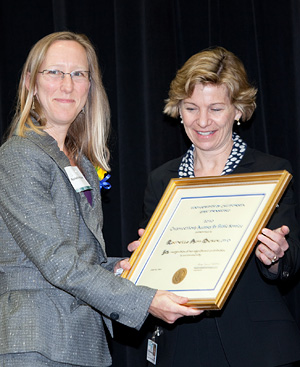 Rochelle Ami Dicker, MD, assistant professor of surgery and trauma surgeon, was honored in the faculty category for her work as director and founder of the Wraparound Project, a violence prevention program at San Francisco General Hospital (SFGH).

The project, which uses case managers to address the root causes of violence and find resources to address these factors, is a successful hospital-based model that is stopping the cycle of violence, a problem that primarily affects African Americans and Latinos, Dicker noted. It is being replicated elsewhere, including UC Davis.

The Wraparound Project is an example of how the University is fulfilling its strategic goals of reducing and eliminating health disparities, Dicker said.

Horning, who is also executive director for Administration and Finance for Obstetrics, Gynecology and Reproductive Sciences, was recognized in the staff category for her many contributions locally and nationally to groups that focus on improving the lives of those marginalized by ageism, sexism, racism, classism and poverty.

“Most of you would be surprised by the depth and breadth of Dixie’s civic engagement,” said Nancy Milliken, MD, director of the CoE in Women’s Health.

Lauded as a “passionate and powerful public servant” and a “transformational change agent,” Horning has been actively involved in organizations, including the Gray Panthers, Glide Memorial Church and the Beijing International Women’s Conference. She now serves as co-chair of the University Community Partnerships program, which works to cultivate and sustain strong collaborations between UCSF and the community.

Horning was recognized on April 28 with a proclamation from the San Francisco Commission on the Status of Women for her leadership promoting women’s health and community service. 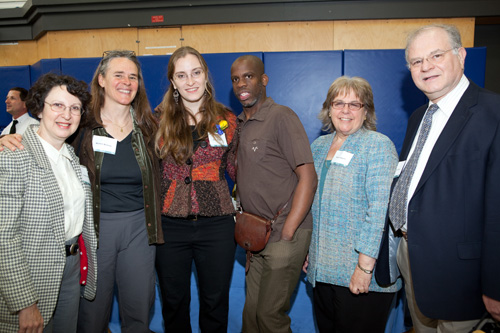 Josie Lehrer, center, who was honored for public service, is joined by friends and colleagues.

Jocelyn Lehrer, ScD, a postdoctoral research fellow, was honored in the student, resident, postdoctoral scholar category for public service for her varied activities ranging from fostering an HIV support group to serving on boards of nonprofit organizations.

She is also recognized for organizing events and special projects, such as the groundbreaking the Men’s Story Project, which examines social ideas about masculinity using the arts as a medium for community-building and social change.

Upon receiving the award, Lehrer thanked her parents for being role models who demonstrate “what it means to be a good person.” 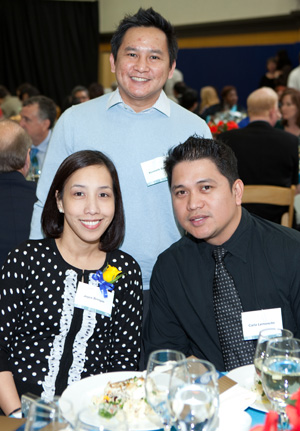 Joyce Bringas, who won an award for stellar service, celebrates the occasion with family members.

Joyce Bringas, a dental assistant in the UCSF School of Dentistry’s Department of Preventive and Restorative Dentistry, is recognized for her exceptional service and great attitude. She is noted for inspiring and building confidence in those around her by providing outstanding service to patients, providers and dental residents.

In addition to her full-time job, Bringas routinely volunteers once a month at the free root canal clinic serving San Francisco’s underserved populations.

Bringas, who followed the footsteps of her grandfather who was a dentist in the Philipines, said she and her colleagues always aim high. Her simple advice is to “do what you love and love what you do.” 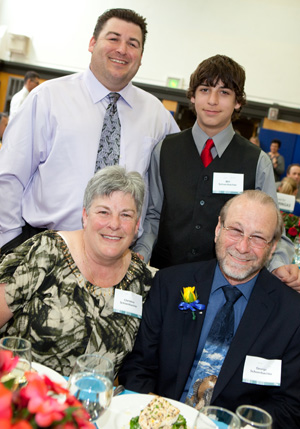 George Schoenbachler, a senior engineer at San Francisco General Hospital, seated at right, is joined by his family at the Founders Day luncheon.

George Schoenbachler, a senior engineer who reports to the UCSF School of Medicine Dean’s Office at SFGH who has 13 years of service, received the service award for his enthusiasm and dedication.

He and his supervisor are the only two employees of the UCSF Facilities Office at SFGH responsible around the clock for buildings occupied by UCSF at the hospital, which means they must act quickly – and sometimes on weekends – to respond to problems ranging from a leaking pipe to an electrical failure.

Described as “patient, kind and knowledgeable,” Schoenbachler has established a preventive maintenance program at SFGH and created a climate of trust between the UCSF and SFGH facilities departments. 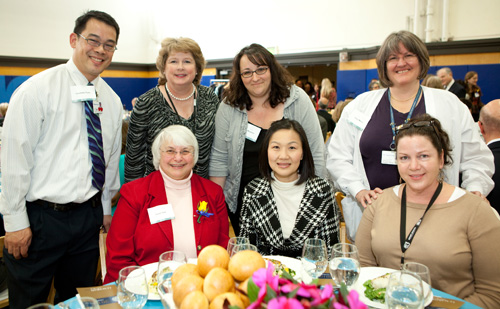 Carole Viele, seated at left, is surrounded by colleagues who congratulated her for receiving an award for exceptional management.

Carol Viele, RN, a clinical nurse specialist in the UCSF Medical Center in Hematology/Oncology, was lauded for great service at UCSF, a 29-year career that included working as a fellow with Desmond-Hellmann.

Regarded as the consummate oncology nurse, Viele is described as an excellent teacher, preceptor and mentor to students. She has served on numerous campus committees where she represents nursing and advocates for safe and high-quality care of patients. 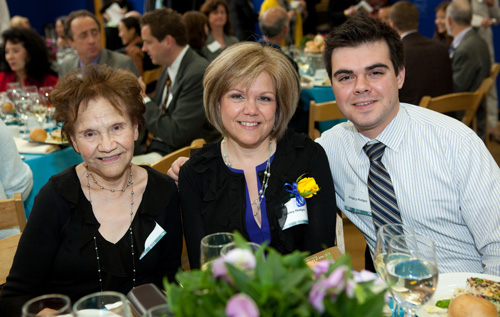 Shirley Hodges, center, who celebrated with her family, received an award for exceptional management.

Shirley Hodges, senior human resources director for the UCSF School of Dentistry, is recognized for her stellar service at UCSF, where she has worked for more than 30 years. Hodges started her career as an administrative assistant in purchasing in 1979 and rose the ranks to her current management position.

Known for her supportive and caring demeanor, Hodges is considered a rich resource on complex policies and is often called upon by department chairs and department managers for her sound advice and counsel. During a transition period in the School of Dentistry, Hodges kept administrative affairs and human resources running smoothly.

Zina Mirsky, RN, EdD, the associate dean for Administration in the UCSF School of Nursing, has been a valuable member of the University community since 1972. Named an associate dean in 1982, Mirsky has served five deans over the past three decades.

Mirsky is recognized for exception management in two major areas:  fulfilling the school’s commitment to increase enrollment beginning in 2005, and overseeing three efficiency committees created to develop business plans and programs which are now being implemented and realized at UCSF.

Kathy Dracup, RN, dean of the UCSF School of Nursing, who described Mirsky as her friend and “therapist,” thanked Mirsky for her support, citing her “incredible generosity of spirit.”

A member of the Chancellor’s Advisory Committee for Academic Diversity, Mirsky is also hailed as a champion of diversity who has worked closely with the school’s Diversity in Action Committee to ensure that increased enrollment reflected increased diversity and that the campus environment and culture is supportive of diversity. 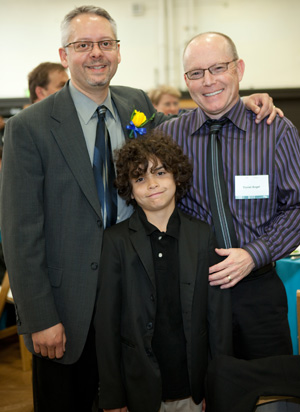 Kevin Souza, left, who won an award for exceptional management, celebrates the moment with his partner and son.

Souza is recognized as a national leader in this field and has made a lasting impact on medical education, not just at UCSF.

David Irby, MD, vice dean for medical education in the UCSF School of Medicine, lauded Souza for his cooperative spirit, problem-solving skills and for being an incredible role model and mentor. 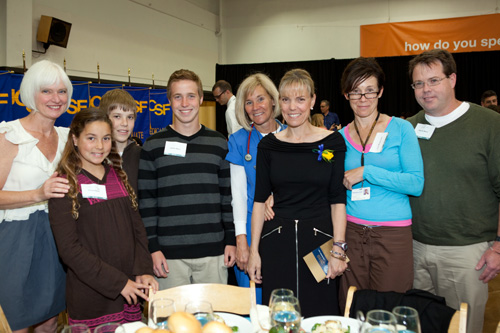 Family and friends gather around Patricia Dillon, who is wearing a rose, before she received the Distinguished Nurse Award.

Patricia Dillion, RN, BSN, CCRN, a clinical nurse who has served in the Pediatric Cardiac Intensive Care Unit at the UCSF Children’s Hospital for 23 years, is recognized for her outstanding contributions to the care of patients and for fostering professional and public awareness of achievements in nursing practice. 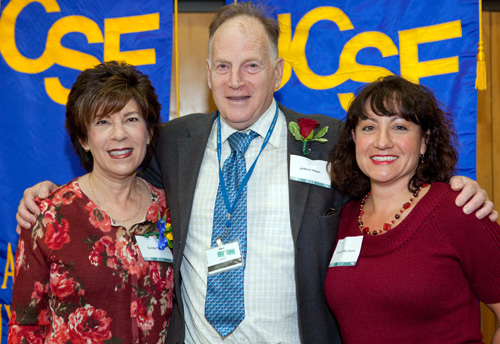 Cynthia Perlis, left, stands with Jeffrey Pearl and a colleague before she received the UCSF at Mount Zion Milton and Helen Pearl Award for Outstanding Service.

Cynthia Perlis, director of the Art for Recovery and the Ida & Joseph Friend Cancer Resource Center at the Helen Diller Family Comprehensive Cancer Center, is hailed for demonstrating an exceptional willingness to render additional service of distinction to others above and beyond what is ordinarily expected.

Erika Grade, patient care manger at UCSF at Mount Zion, praised Perlis for her dedication and service that “represents the best” of UCSF.

Perlis, a member of the UCSF community for 19 years, credited Ernest Rosenbaum, MD, for hiring her in 1988 and his vision that has made Art for Recovery an award-winning program that creates a safe haven for patients and staff to be heard, to express their feelings and find support.