A year after politicians, pundits and the public began an intense debate on how to reform the nation’s ailing health care system, the US House of Representatives on Sunday passed landmark legislation that will extend insurance coverage to 32 million more Americans.

With the 219-to-212 vote, House Democrats gave final approval to legislation passed by the Senate on Christmas Eve. Thirty-four Democrats joined all the Republicans in voting against the bill.

President Barack Obama is expected to sign the $875 billion health care bill into law at the White House on Tuesday. 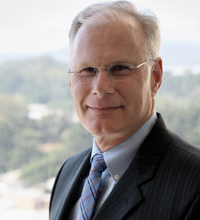 It’s a significant step toward the goal of universal coverage sought by every Democratic president since Harry Truman.

Laret was among a group of academic medical center leaders and the board of the Association of American Medical Colleges (AAMC) who recently came to a unanimous decision on the health care bill.

“The choice was to endorse the current House proposal, which is imperfect, or oppose the current House proposal and urge Congress to start over on health care reform,” Laret said in an email to the campus community. “The overwhelming sentiment of both groups was that the nation will be better off with the legislation on the table now, enabling about 30 million of the 50 million uninsured Americans to gain access to health care.”

“This truly is a remarkable milestone and makes significant inroads in decreasing significant disparities in our current health care system,” she said. “Increasing the age limit for young adults on their family health insurance plans will clearly help to close the uninsured gap as a third of all the uninsured are young people in their 20s. Extending Medicaid eligibility and eliminating pre-existing condition exclusions for health insurance also will help many marginalized populations who have lacked significant access to health care.

The commitment to primary care, prevention, and health promotion as key elements demonstrates that the vision of improving health must extend beyond the traditional parameters of health care delivery.”

However, Brindis is among those who believe the legislation will have to be improved over time.

“The plan will clearly need to be worked on in the years to come, with special consideration for cost-containment and other delivery and payment system reforms that reward quality improvement and outcomes. In addition, especially in our state and nationwide, we need to acknowledge many other plan limitations — particularly the lack of coverage for millions of immigrants.”

Alan Gelb, MD, clinical professor of emergency medicine at San Francisco General Hospital, said today the bill is a step in the right direction. He says the legislation is more important for the rest of the country since “San Francisco is already ahead of the curve because of the benefits of Healthy San Francisco.”

Gelb also noted that parts of the legislation will be phased in and won’t happen overnight. “The effects of the bill on health care for underserved, those who have lost insurance because of inability to afford it, for those with pre-existing conditions, and serious illnesses who have ‘maxed out’ their benefits will take some time to be realized,” he said.

Leaders across US academic medical institutions, the University of California and UCSF weighed the pros and cons of the legislation. The board of the California Hospital Association recently endorsed the legislation (contingent on geographic variation remaining out of the bill), and last Friday, Jack Stobo, senior vice president for Health Sciences and Services at the UC Office of the President, sent a letter to President Obama expressing the University of California’s support for this legislation.

Laret said that “there are aspects of reform that will cause financial, operational and other challenges for UC, UCSF and academic medicine.”

“But even so, my personal view is that with passage, our nation will have taken the first and most important step toward making certain that comprehensive health care is available to all people who live in the United States, employed or unemployed, indigent or aged. If you know someone who has been without coverage and needed it, or needed it yourself, you know how important this is.”