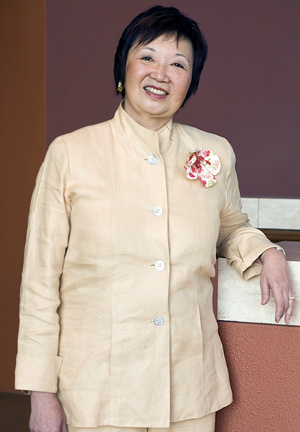 Named for eminent community pharmacist, manufacturer and educator Joseph P. Remington, the award recognizes distinguished service and/or outstanding achievement on behalf of American pharmacy. The award will be presented to Koda-Kimble on March 13 during the APhA Annual Meeting and Exposition in Washington, DC.

In a nomination letter, Robert D. Gibson, the 2006 Remington Medalist praised Koda-Kimble noting, “It is not only the sheer quality and quantity of her accomplishments, but also her leadership, her steadfast dedication, and her sustained commitment to education, the public good and the advancement of the profession that make her a more-than-deserving nominee.”

Koda-Kimble’s career began 40 years ago when she joined the UCSF faculty in 1970 after earning her PharmD degree at UCSF. She was one of a small group of pioneering practitioners who blazed the trail for what would become known as clinical pharmacy  now an established discipline in which pharmacists care directly for patients in all settings to ensure the optimal and safe use of medications and promote health and disease prevention.

Koda-Kimble, who holds the Thomas J. Long Endowed Chair in Community Pharmacy Practice, describes these early days of clinical pharmacy and shares her personal story in a video profile produced in 2009 and posted on the diversity website.

Realizing that student pharmacists and practitioners needed a textbook uniquely designed for their emerging clinical roles, Koda-Kimble and colleague Lloyd Young, PharmD, led the 1975 publication of Applied Therapeutics for Clinical Pharmacists, the first textbook of its kind. The book, which is recognized as the standard at pharmacy schools here and abroad, has had eight additional editions and a change of title, Applied Therapeutics: The Clinical Use of Drugs.

Before becoming dean of the top-ranked School of Pharmacy in 1998, Koda-Kimble served as chair of the school’s department of clinical pharmacy.

Koda-Kimble is widely regarded as an expert in diabetes and has shared her vision and expertise with others by publishing 36 articles, 16 books and contributing a total of 31 book chapters. In addition, she has delivered more than 200 lectures to lay, professional, or scientist audiences around the world, including ten prestigious lectures and eight commencement addresses.

Koda-Kimble has received numerous teaching and practice awards throughout her career, picking up her first “best teacher” award in 1974. She received two honorary doctor of science degrees, the APhA Daniel B. Smith Practice Excellence Award, and the Parker Medal of the American College of Clinical Pharmacy, which is the highest honor given to an individual for outstanding contributions to the field of clinical pharmacy in the U.S. In 2008, the APhA Academy of Students of Pharmacy presented her with the Outstanding Dean Award.

In 2000, she was elected to the Institute of Medicine, the ninth pharmacist ever elected. She has served on boards of a number of professional organizations including the United States Pharmacopeia (USP), the American Association of Colleges of Pharmacy (AACP), where she was also president and the American Foundation of Pharmaceutical Education (AFPE).

Lisa Cisneros contributed to this report