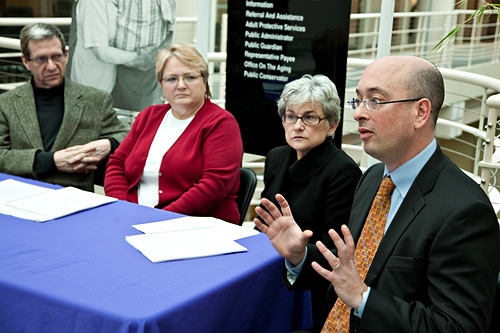 Despite recent promising advances in Alzheimer’s disease research at UCSF, a “dramatic increase between now and 2020” is expected in the number of San Franciscans living with dementias, according to experts.

One out of every two people aged 85 and older has some type of dementia and this age group is the fastest growing segment of the population. Currently, 18 percent of San Franciscans are over 60. Within three years, this figure is expected to swell to 24 percent. About 10 percent of individuals over age 60 have Alzheimer’s disease or another form of dementia.

At a press conference hosted by the San Francisco Department of Aging and Adult Services (DAAS), an expert panel, appointed by Mayor Gavin Newsom, convened Feb. 24 to present its 10-year plan to optimize care for patients with dementias.

This initiative, “San Francisco’s Strategy for Excellence in Dementia Care,” is the culmination of a yearlong collaboration among experts in the fields of neuroscience, health care, aging, care-giving and supportive services. The innovative plan is needed to prepare for the approaching “age wave,” which “may bring a potential crisis in Alzheimer’s and dementia care” to San Francisco, Newsom said.

The goal of the strategy is to transform the current system’s “organizational, fiscal and regulatory barriers” into one that is “comprehensive, coordinated and integrated,” enabling a “seamless transition” to a network of patient care and support services, according to Anne Hinton, executive director of the San Francisco DAAS.

It is hoped that the strategy will provide a model for dementia programs elsewhere, said Kathy Kelly, executive director of the Family Caregiver Alliance.

The San Francisco strategy points to a future approach to service delivery that:

Adam Boxer, MD, PhD, Vera and John Graziadio Scholar in Alzheimer’s Disease Research and assistant professor of neurology at UCSF, was among several UCSF faculty members to contribute to the plan. At the press conference, Boxer compared the seriousness of the looming dementia crisis with the advent of the AIDS epidemic in San Francisco in the 1980s.

Initiatives to ramp up services for this patient population include educating physicians and “first responders,” such as police and EMT crews, to become more attuned to the symptoms of Alzheimer’s and other dementias, said Boxer, who directs studies of new therapeutic agents for Alzheimer’s disease and frontotemporal dementia at the UCSF Memory and Aging Center.

Early symptoms include depression and poor judgment that may not be immediately associated with dementia, said Jay Luxenberg, MD, a clinical professor at UCSF and medical director of Jewish Home of San Francisco, not-for-profit, licensed skilled nursing facility in specializing in programs, services and care for older adults.

As part of the new plan, senior centers will have resources to help identify people with possible early dementia, and provide “brain health” programs that may slow the progression of the disease, said Ruth Gay, director of public policy of the Alzheimer’s Association.

The plan also calls for offering incentives to doctors to enter the fields of geriatrics, geriatric psychiatry and behavioral neurology — specialties that are understaffed and viewed as less lucrative, according to Boxer.

“With other underserved populations, such as those who live in rural or inner-city neighborhoods, the government has created incentives, such as training grants and loan forgiveness programs to encourage physicians to provide care,” Boxer said. “Our plan proposes funding for similar specialists to care for individuals with cognitive impairment, who would agree to work in San Francisco, including in community health centers, to care for people with cognitive impairment and dementia.” 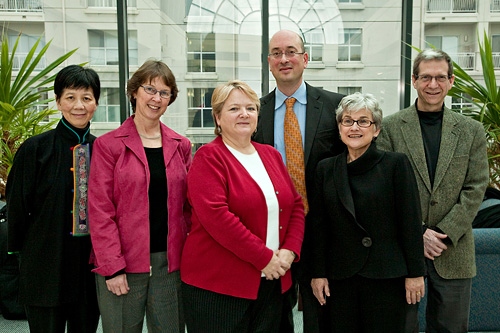 And de-stigmatizing dementias so that this “invisible population” could get prompt treatment is another other recommendation made by Boxer and Anni Chung, president and CEO of Self-Help for the Elderly.

The plan calls for using information technology to develop “patient dashboards” enabling physicians, pharmacists, social workers, and possibly caregivers and patients themselves, to access records, integrate and streamline care even when all health professionals are not part of the same institution.

Both Boxer and Luxenberg emphasized the importance of early intervention in dementias, likening its benefits to the early treatments in diseases like diabetes.

“Although we don’t yet have a cure for Alzheimer’s, there are a variety of treatments and other interventions that can improve its symptoms,” Boxer said. “It’s important to know that patients do better if they seek treatment early on.”

For example, vascular dementia, another common form of dementia, is triggered by stroke or damage to tiny blood vessels deep in the brain. The progression of the disease can be stalled by taking medications to treat underlying disorders and making healthy lifestyle changes, Luxenberg said.

Boxer described the goals of the 10-year plan as “emblematic of the innovative, forward-thinking and compassionate values that make San Francisco special” and said it was fitting that the strategy had been developed in a city where significant strides had been made in the diagnosis and treatment of Alzheimer’s.

“While we hope that one or more of the treatments we’re working on will be effective in slowing or halting Alzheimer’s or other forms of dementia, it might be overly optimistic to say that we will have those drugs in 10 years,” Boxer said.

Boxer is the principle investigator of the first US multicenter clinical trial of a therapeutic agent (memantine) for frontotemporal dementia, a degenerative disease typically striking younger seniors, affecting the part of the brain controlling decision-making, language, behavioral-control and emotions.

“These are tough diseases to cure, possibly as difficult as cancer. We’re 20 or 30 years behind cancer researchers in developing treatments,” Boxer added.

But breakthroughs in Alzheimer’s give Boxer cause for optimism. These include the use of a new imaging tool known as PIB-PET, which can detect deposits of amyloid-beta plaque in the brain of patients before they develop symptoms of the disease. PIB-PET is currently being used to test experimental anti-amyloid therapies that might one day be prescribed for pre-symptomatic Alzheimer’s patients to halt the progression of the disorder.