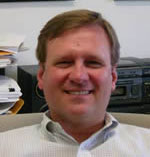 Scientists have identified a gene family that plays a key role in one of the earliest stages of development in which an embryo distinguishes its left side from the right and determines how organs should be positioned within the body. The finding in mice likely will lead to a better understanding of how certain birth defects occur in humans.

The study is published in the January 24, 2010, advance online issue of the journal “Nature Cell Biology.”

“Having clear knowledge of embryonic development and how certain developmental processes can go awry is imperative for understanding the causes of the various types of human birth defects, which may eventually help us devise ways to correct those defects,” said Anthony Wynshaw-Boris, MD, PhD, chief of medical genetics at UCSF Children’s Hospital and a co-senior author of the study.

In the current study, the research team built upon previous work that uncovered the mechanism within the embryo responsible for specifying its left and right sides – a process called left-right symmetry breaking. That research, conducted by geneticist Hiroshi Hamada, MD, PhD, and colleagues at Japan’s Osaka University, showed how tail-like projections known as cilia located on the surface of cells in an embryonic region called the node generate a leftward flow of fluid outside the embryo, which, in turn, lets the embryo know which side is the left.

In this earlier work, Hamada’s group discovered that the cilia are able to produce a leftward flow of fluid because they are located toward the back of the node cells and are tilted toward the embryo’s tail end. This unique placement, coupled with the cilia’s clockwise circular beating motion, results in the leftward flow and, subsequently, the embryo’s left-right symmetry breaking. According to the researchers, if this directional flow is not established, organisms can develop with their internal organs on the wrong side of the body, decreasing chances for survival.

“Knowing that the cilia’s placement on the node is intricately involved with this key stage of embryonic development, we decided to take our work a step further to see whether certain genes might determine how cilia retain this tilted position,” said Hamada, who is also a co-senior author of the current study.

Hamada and Wynshaw-Boris decided to look at whether a specific gene family, called the “Dishevelled” gene family, might be directing the cilia’s migration to the back side of the node cells. Having researched this gene family for many years, the Wynshaw-Boris lab developed mouse models with each of the three Dishevelled genes “turned off” to study their individual functions. In doing so, they found that the Dishevelled genes activate a genetic pathway, called the planar cell polarity pathway, which helps determine positional information in cells and tissues.

“We focused on the Dishevelled gene family because from our previous work, we knew that these genes were involved in the development of hair cells within the inner ear of the embryo, and that the cilia-like structures at the edge of the hair cells behave in a similar fashion as those on the node of the embryo. That similarity made us take a closer look at how this gene family was acting on correct placement of the nodal cilia at this very early stage of development,” Wynshaw-Boris explained.

Masakazu Hashimoto, a graduate student in the Hamada lab and the first author of the study, monitored the movement of cilia in live mouse embryos using a high-speed camera attached to a microscope and observed that the cilia’s position actually changed as development proceeded. In the very earliest stages – before left-right symmetry breaking occurred – cilia were located in the center of the node cells; then, as development progressed, the cilia gradually moved to the back side of the cells.

The researchers compared cilia in normal mouse embryos to those in embryos with mutated versions of all three Dishevelled genes. They found that the cilia in the mutant embryos were misplaced on the node cells and therefore unable to produce a leftward flow of fluid.

“This discovery provides exciting information about how we are built the way we are at the most basic of levels: that is, how do we differentiate our left side from our right? Ultimately this determines how the heart ends up on the left side of the body and the liver on the right side, for example,” Wynshaw-Boris added.

UCSF Children’s Hospital creates an environment where children and their families find compassionate care at the forefront of scientific discovery, with more than 150 experts in 50 medical specialties serving patients throughout Northern California and beyond. The hospital admits about 5,000 children each year, including 2,000 babies born in the hospital. For more information, visit http://www.ucsfchildrenshospital.org.