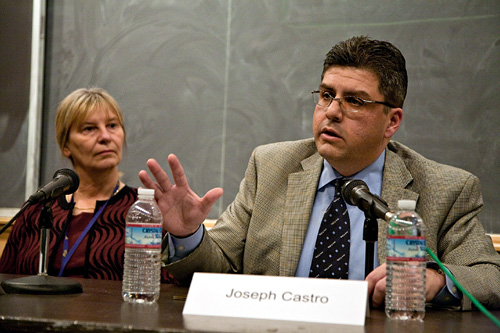 The road to success is different for every traveler, but nearly all who excel in their careers can point to the invaluable presence of a mentor who helped them along the way.

In a Jan. 25 panel discussion on the role of mentors in shaping careers, six of UCSF’s most prominent leaders talked about their individual achievements, their own mentors, and the ways in which they try to “pay it forward” to the next generation.

UCSF Chancellor Sue Desmond-Hellmann, MD, MPH, said the three most influential mentors in her life have been her father, a pharmacist and a “great communicator and manager”; Lloyd Hollingsworth “Holly” Smith Jr., MD, chair of the Department of Medicine when Desmond-Hellmann was a medical resident at UCSF; and Art Levinson, the chairman of Genentech for most of Desmond-Hellmann’s 14-year career there.

Nancy Adler, the 2009 recipient of the UCSF Lifetime Achievement in Mentoring award, talks about her experiences in academia.

Those guiding forces “strongly influenced my sense that I should measure my own success by the success of others,” she said. “They inspired me to set up an organization where people want to help and have a positive influence on others.”

As Genentech’s president of product development from 2004 until mid-2009, Desmond-Hellmann was a driving force behind several mentoring programs within the company. As chancellor, she has stressed the importance of creating a community in which each member feels a strong connection to the overall mission and vision of the University — something that can only be accomplished with the aid of strong mentors, she said.

Like Desmond-Hellmann, the other panelists credited multiple people with helping them in their professional development.

“I’m not sure you can have a single mentor who meets all your needs,” said Nancy Adler, PhD, director of the UCSF Center for Health and Community, and the 2009 recipient of the UCSF Lifetime Achievement in Mentoring award.

Panelist Joseph Castro, PhD, vice provost of Student Academic Affairs, said he has been strongly influenced not only by former teachers, advisors and bosses, but also by “virtual mentors”— authors and public figures whose speeches and written work have inspired him.

As for the essential components of a good mentor, the panelists agreed that trustworthiness is important. A mentor must also help his or her mentee articulate short- and long-term goals and formulate a plan for achieving them, the group said.

Adler compared mentors to coaches who occasionally need to step in and make a tough call, even if it favors the other team.

“It’s rare in life that you get honest feedback, but it’s so helpful,” she said. “So a mentor needs to be a bit of both coach and referee.”

The panelists also tackled the difficult question of whether to seek out mentors who share one’s own race, ethnicity or gender. 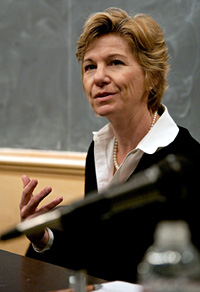 Desmond-Hellmann said that while it can be “inspiring to talk to someone who shares your background and experiences,” it is also important to avoid shutting out unfamiliar—and potentially valuable—perspectives.

Castro, who has worked at five UC campuses throughout his career, credited UCSF with working hardest to develop its formal mentoring programs. The strength of those programs is evident in Castro’s own lasting connections to former mentees.

“I stay in touch with dozens of former students,” he said. “I view [the relationships] as continuous conversations, and I get as much out of it as they do.”

The event was hosted by the UCSF Faculty Mentoring Program as part of a series of special events planned for National Mentoring Month in January. This year, the Faculty Mentoring Program is developing a survey to quantify mentees’ satisfaction with the quality of mentoring they receive from their career mentors, according to Mitchell Feldman, MD, MPhil, director. The survey is being piloted in the UCSF School of Dentistry, with the goal of eventually making this available to all UCSF mentees.