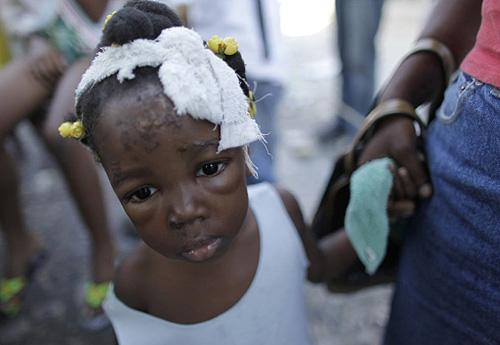 A girl waits for medical attention in front of a damaged hospital in Carrefour, outside Port-au-Prince. Photo by Ariana Cubillos / AP

In the wake of the devastating Jan. 12 earthquake in Haiti, members of the UCSF community are working hard to provide much-needed aid and supplies to the millions of victims.

In the days following the 7.0 magnitude quake, various UCSF student groups collaborated to raise more than $1,400 for the aid organization Partners in Health (PIH), and that sum was matched by a private donor, according to first-year medical student Abby Burns, who helped coordinate the fundraising effort.

Burns and her fellow students aren’t stopping there. They have formed the Interprofessional Disaster Relief Organizing Committee to respond to this and future humanitarian disasters, and have joined with other universities in the “Stand with Haiti Challenge” outreach effort.

The UCSF committee has set an initial goal of raising an additional $20,000 for PIH efforts in Haiti. They will do this through the sale of blue and red ribbons—the color of the Haitian flag—and through an online donation site.

“One important thing we recognize about the crisis in Haiti is that people want to ‘do something,’ but most students are not prepared with training to actually go to Haiti and provide direct aid,” Burns said in an email message. “The most important thing we can do right now is raise money, supplies, and awareness about the issue, and potentially connect students to opportunities for direct service that may arise later on.”

Student groups have also been collecting surplus items from UCSF Medical Center and providing them to REMEDY at UCSF, a student-run organization that promotes the recovery of unused medical supplies and medicine for the purpose of global aid, waste reduction and cost-effectiveness.

Offering Help on the Ground

In addition to the many on-campus efforts, UCSF personnel will soon be providing relief on the ground in Haiti, with several faculty and staff scheduled to travel to the capital city of Port-au-Prince in the coming days.

Some of those individuals have experience working in developing nations, including Elizabeth Donegan, MD, a UCSF professor of anesthesia who in the past has helped set up blood transfusion centers abroad. As of Thursday, Donegan was awaiting air clearance at the clogged Port-au-Prince airport.

Sriram Shamasunder, MD, an assistant clinical professor in the Division of Hospital Medicine, has also provided medical care in poverty-stricken countries, most recently in Burundi in 2009 as a volunteer with PIH. The group contacted him shortly after the Haiti earthquake to see if he was available to assist, he said, and he hopes to fly there on Jan. 22 or 23.

Megan Coffee, MD, PhD, a clinical fellow in the UCSF Division of Infectious Diseases, said Wednesday that she plans to leave for Haiti within a week to work with the non-governmental organization AIDG. In the meantime, she’s working to make sure she doesn’t show up empty-handed, she said.

“I have been to Haiti before, briefly, as a medical student, and I cannot imagine what it is like now,” Coffee said in an email message. “I want to make sure before I go that I have done all I can here [at UCSF] to make sure there are enough supplies for medical groups there. Barehanded doctoring is not very effective.”

Coffee has also set up a Google group for doctors, nurses and other health care professionals who are working on Haiti relief efforts in the San Francisco Bay Area or on the ground in Haiti.

However, getting into the country remains difficult, and more than a week after the earthquake, relief groups say that transportation bottlenecks and air traffic congestion in Port-au-Prince have cost lives of victims. At least 72,000 people have been confirmed dead, according to Haiti’s prime minister.

The U.S. military, which has been assisting Haitian authorities in controlling air traffic into the capital, said Wednesday that it had obtained landing rights at the Dominican Republic’s air base at San Isidro, near the capital of Santo Domingo, about 150 miles east of Port-au-Prince.

As UCSF personnel attempt to enter the country, a disaster assistance team comprised of emergency management officials and University leaders is working to make sure things continue to run smoothly back on campus, said Christopher Jones, director of Homeland Security and Emergency Management at the UCSF Police Department.

“There’s an outpouring of people who want to go to Haiti,” he said Thursday. “We need to consider, if faculty start going over there, what happens to the medical center, San Francisco General Hospital, and interns and residents that they oversee? If students try to go and take an extended absence from their studies, what impact would that have on their academic standing?”

Jones noted that pairing first-time volunteers with aid organizations is not always easy, as the groups often avoid taking on relief workers they are unfamiliar with.

“We’re hoping that one of the outgrowths from this current relief effort is we might begin to identify some opportunities to partner with existing disaster response organizations so that in the future, when there’s a disaster, we have a pool of people who have already been vetted by these groups,” Jones said.

Jones advises anyone at UCSF who is looking for more information on disaster response organizations to email his office.

UCSF is not officially endorsing donations to any single aid organizations. Below is a list of some of the many ways to help Haiti:

Ways to Help via the Web

US Centers for Disease Control and Prevention (CDC) Earthquake webpage