Telomeres – which are the DNA repeats that form the tips of chromosomes and are produced by the telomerase enzyme – play a crucial, and curious, role in the life of the cell.

While chromosomes are tightly bound strands of DNA that comprise the body’s genes, telomeres, while made up of DNA, do not form genes and thus do not code for proteins. Rather, they carry out several steps to ensure the health of chromosomes – and have a direct impact on cell life span. 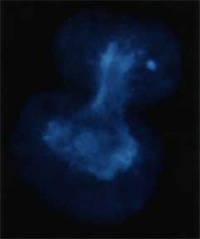 Much like the plastic tips on shoe laces, telomeres prevent the long strands of chromosomal DNA and their associated proteins from wearing away, unraveling or being destroyed by DNA-digesting enzymes.

They also help control the process by which paired chromosomes separate when cells grow and divide. This process is critical for ensuring that the two daughter cells inherit the correct allotment of genes. Missing or extra copies of genes are often observed in cancer cells.

But telomeres also play a key role in determining the number of times a cell divides. In an intriguing act of nature, a portion of telomeres drops from the tips of chromosomes each time a cell prepares to divide. After some tens of rounds of cell division, a certain amount of telomeric DNA has been whittled away, signaling the cell to stop dividing, age and die.

This built-in limit on cell division, known as the Hayflick limit, was detected in 1961 by Leonard Hayflick, PhD, an adjunct professor of anatomy at UCSF. The process may be nature’s way of controlling the life span of cells, ensuring that cells do not replicate interminably, as they do in cancer.

In this way, telomere activity impacts the health of cells and the tissues they form. Elizabeth Blackburn’s team also has found evidence that deactivating telomerase, itself, in human cells has an effect on cell life span that is independent of telomere shortening or uncapping.

The wily maneuvers of evolution

Subsequent to Hayflick’s discovery of a built-in limit on cell division, Nobel laureate James Watson of Cold Spring Harbor Laboratory and Alexei Olovnikov in Moscow surmised why chromosome ends disappear. They reasoned that the enzymatic DNA-replicating machinery that enables DNA to make copies of itself is unable to find a foothold on the outer limits of the chromosome.

In 1985, Blackburn discovered the wily maneuvers that evolution can perform to get around such molecular roadblocks. While studying the single-celled pond dweller Tetrahymena, she had noticed that the organism’s chromosomes would mysteriously grow and shrink and then grow again. This observation suggested to her that the organism was creating new DNA. But this concept flew in the face of a biological tenet – that the DNA we are born with is the DNA we die with, and that the DNA in the nearly 100 trillion cells in the human body is but the result of biochemical xeroxing.

Blackburn decided to look for an enzyme that might cause this unusual behavior in telomeres. The explanation, she and Carol Greider discovered, was that the chromosome was creating new DNA, but in a novel way: It was attracting a novel enzyme – which they named telomerase – that could synthesize new telomeres from its own biochemical sequence.

Telomerase, they determined, was adding multiple copies of the original telomere DNA sequence to the very ends of the chromosomes, thereby producing an extension at every chromosome end that allowed replication of the chromosome to be completed.

Nearly all organisms have an enzyme that can stimulate the conversion of DNA, which contains an organism’s genetic code, or genes, into messenger RNA. This process, known as transcription, is the first step in the process of converting a gene’s code into protein.

However, only a few enzymes can stimulate the reverse process, the conversion of an RNA template to DNA. This phenomenon, called reverse transcription, was brought to notoriety by the viral enzyme HIV reverse transcriptase.

The telomerase in cells, Blackburn discovered, is also a reverse transcriptase enzyme – it assembles and adds telomeric DNA to the ends of chromosomes by copying a small part of its RNA into telomeric DNA. In this way, telomerase creates new endings to the chromosome tips, seemingly out of whole cloth.

Until several years ago, scientists thought that in humans, telomere length shortens over time in normal body cells, while being maintained by telomerase activity in cancer cells. However, this generalization is now being challenged by a more complex scenario.

In 1999, Blackburn and Nobel laureate J. Michael Bishop, MD, chancellor of UCSF, reported that telomerase can extend the life span of human cells without lengthening telomeres. Their study was conducted in human fibroblast cells.

That finding has now gelled with converging experimental results from Blackburn’s lab and other labs, using yeast and human cells. These findings do not rule out a role for telomere length in determining cell life span, says Blackburn. Rather, they now reveal that the telomerase enzyme also contributes to genomic stability, offering another means for potentially manipulating the enzyme for therapeutic purposes.

While Blackburn focuses her research on the ways in which telomeres function and on what factors influence their specific behaviors, she also is fascinated with the telomerase enzyme as a possible biochemical relic. Many scientists have long theorized that in the earliest forms of life, RNA – not DNA – stored an organism’s genetic material and also made up the catalysts that preceded present-day enzymes. RNA was able to be both an enzyme that drove metabolic processes and a keeper of the genetic message.

In the present world, most enzymes are made up strictly of protein. But Blackburn has discovered that the telomerase enzyme machinery itself is unusual in that it is made up of RNA as well as protein. Therefore, in telomerase, a protein-RNA hybrid, Blackburn has perhaps discovered a throwback to that first life scheme. She speculates that the RNA-protein combination that was the ancient telomerase of cells may have been an ancestral portion of viruses such as HIV.