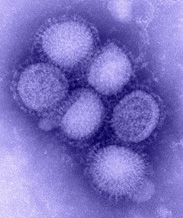 Images of the H1N1 influenza virus taken in the CDC Influenza Laboratory.

With its tendency to strike down healthy young adults, as well as the timing of its emergence and predicted resurgence, the H1N1 swine flu pandemic is showing some unsettling similarities to the 1918 flu that killed as many as 100 million people worldwide, according to UCSF global health and epidemiology expert George Rutherford, MD.

“The way this flu is shaping up, it’s almost a parallel situation with the Spanish flu, which is why it’s causing so much concern among health experts,” Rutherford said in a Sept. 14 talk at UCSF’s Parnassus campus.

However, Rutherford and other public health specialists at UCSF are quick to point out that it is too early to tell whether the current virus will cause anywhere near the devastation of its 1918 cousin. In addition, they caution, fears over the H1N1 virus should not overshadow the fact that the familiar seasonal flu kills an estimated 36,000 people each year in the United States.

Rutherford is the director of the Global Health Sciences Prevention and Public Health Group at UCSF and head of the Division of Preventive Medicine and Public Health in the Department of Epidemiology and Biostatistics within the UCSF School of Medicine. His talk was the first in the University’s annual Global Health Sciences Lecture Series, which occurs once a month.

In his lecture, titled “Novel Pandemic Influenza A (H1N1) Virus: Origin, Current Epidemiology and Future Course,” Rutherford looked back through the history of several major 20th-century flu outbreaks, noting that in certain key ways, history seems to be repeating itself in the form of the latest pandemic.

The Spanish flu — also an H1N1 strain — made a relatively quiet debut in the spring of 1918, but then reemerged in a more virulent form in the fall, killing people quickly and on a large scale throughout the world, Rutherford said.

What’s more, he said, unlike seasonal flu, which causes the most harm to young children and the elderly, the Spanish flu targeted not only those groups but also healthy adults in their prime.

This so-called “W-shaped mortality curve,” with clusters of deaths occurring among the very young, the very old and adults under 50, is evident in the current swine flu pandemic as well — an age distribution the World Health Organization (WHO) describes as a “stark contrast” with seasonal flu.

In addition, according to the WHO website: “An increased risk during pregnancy is now consistently well-documented across countries. This risk takes on added significance for a virus, like this one, that preferentially infects younger people.”

Along with its preferred targets, the timing of this latest H1N1 flu is also reminiscent of the Spanish flu, Rutherford noted. Both viruses cropped up in the late spring and the current flu is expected to surge again in midwinter, as the Spanish flu did.

An estimated one million people in the US had been infected with the novel H1N1 virus, with 752 deaths and 10,233 hospitalizations, according to the Centers for Disease Control and Prevention (CDC).

Rutherford noted that the number of reported cases in the US has been highest among people ages five to 24, followed by children under five, who have been hospitalized at the highest rate.

A third age group has borne the brunt of swine flu deaths: individuals ages 25 to 49. That group accounts for nearly 40 percent of all deaths so far, the CDC reports.

“This is very atypical,” Rutherford said of the trends. “It appears that people born before 1950 aren’t really at risk of becoming ill with this flu, which may be because they have previously been exposed to strains [of flu] that were antigenically similar to the strain circulating right now.”

Despite several unusual characteristics, H1N1 has so far proven no more harmful than seasonal flu in terms of numbers of severe cases, said Josh Adler, MD, chief medical officer at UCSF Medical Center, who discussed a possible H1N1 outbreak at UCSF at a Sept. 14 meeting.

UCSF Medical Center and Occupational Health Program are preparing for the upcoming flu season in a variety of ways, including implementing the University’s standard seasonal flu shot program and requiring all health care workers to be vaccinated or wear surgical masks, Adler said.

In addition, he noted, UCSF has applied to distribute the H1N1 vaccine when it becomes available, though approval of that request is still pending and it remains unknown how many doses the University would receive.

Adler and other experts stress that prevention is critical to controlling the spread of both seasonal and H1N1 flu. Faculty, students, staff and trainees are strongly encouraged to get vaccinated during the upcoming flu shot clinics occurring at UCSF between Oct. 12 and 28. Those who have influenza-like symptoms should stay home for five days after the onset of symptoms.

“Everyone needs to take responsibility for staying away from work and class if they are sick and practicing healthy habits such as covering their coughs, using their sleeve and washing their hands often,” said Susan Garrtitson, Occupational Health Program coordinator.

In his talk, Rutherford argued in support of vaccination, especially of children.

“This is much too widespread for school closures to make any difference,” he said of the H1N1 flu. “What we need is for children to get vaccinated. If you get the schools under control, you control the spread in the adult population as well.”

The day after Rutherford’s talk, the Food and Drug Administration announced approval of four H1N1 vaccines, which it said would be distributed nationally by mid-October.