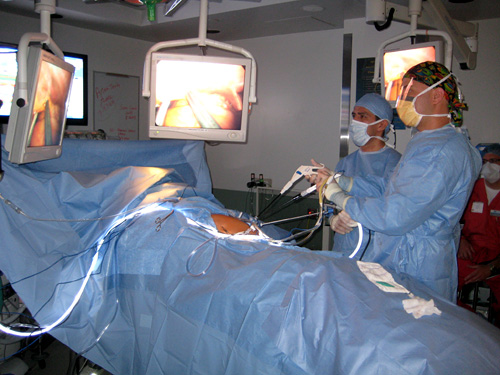 Surgeons at UCSF have taken a major step down the path toward less invasive procedures, performing San Francisco’s first gallbladder removal using only a single, small incision hidden within the navel.

The procedure, which took place in May, is a significant advance in the field of minimally invasive surgery, said UCSF gastrointestinal surgeon Jonathan Carter, MD, who led the surgical team.

“Over the last 20 years, many of the big surgical innovations have involved doing operations using less invasive techniques,” Carter said. “Our ultimate goal is bloodless, incisionless and painless surgery. With the single-incision laparoscopic surgery, we’ve moved another step in that direction.”

The SILS Port is a flexible plug that can be placed within a small incision in the navel. The surgeon can then insert up to three laparoscopic instruments  such as scissors or forceps  through holes in the plug. 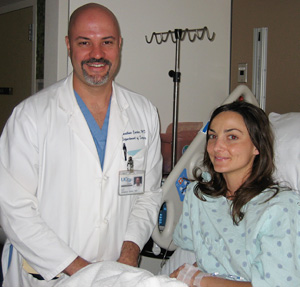 To date, only several hundred patients in the United States have undergone single-incision gallbladder removal, Carter said. But the potential market is huge: More than 500,000 Americans undergo conventional gallbladder removal every year.

Single-incision surgery takes roughly the same amount of time as multiple-incision surgery, and the technique is similar to  albeit more demanding than  conventional laparoscopic gallbladder surgery, Carter said. The main benefit is cosmetic, he said, but other potential benefits are less pain, less scarring, less risk of infection, and a faster recovery.

“I think this is something the market will drive, as people seek to avoid visible scars on the abdomen,” he said.

That potential benefit was one of the things that convinced Carter’s inaugural gallbladder patient, Katie Stokes, to agree to try the SILS procedure.

Stokes, 29, began having pain in her upper abdomen in April 2008, but doctors initially had trouble identifying the source of the problem, she said.

“I would have these episodes where I couldn’t sit up, couldn’t stand,” she said. “I wouldn’t stop throwing up until I got to the emergency room.”

Although one scan of her gallbladder showed no signs of gallstones  a condition that affects 10 percent of Americans  another scan showed abnormal gallbladder function. Stokes chose to undergo surgery rather than wait for the next episode to occur, she said. 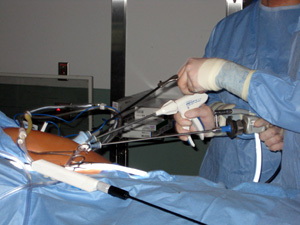 UCSF surgeons perform a gallbladder removal using a specialized instrument that can be inserted through a single incision in the bellybutton.

“I was referred to Dr. Carter, and he mentioned single-incision surgery,” she recalled in a recent phone interview. “I was definitely interested in hearing more.”

After discussing her options at length with Carter and watching an online video of a procedure using a SILS Port, Stokes agreed to give it a try. On May 4, she underwent San Francisco’s first single-incision gallbladder removal. She was back at home the next day and back to work two weeks later, she said.

As of late May, Stokes was recovering well, but said her abdomen was still slightly tender and the surgical incision was still quite visible  something Carter said was normal at that stage in the healing process, which could take up to six months.

Eleven days after Stokes’ surgery, Carter performed another successful operation using the SILS Port, this time to remove the appendix of a 20-year-old woman with acute appendicitis.

Carter said that he chose his initial two patients carefully, and that not everyone is a good candidate for single-incision surgery. Patients who are obese, have had prior major abdominal operations or present with severe inflammatory disease should opt for the conventional approach, he said.

In addition, Carter cautions that the benefits of single-incision over multiple-incision surgery are still being evaluated.

“We don’t know if there is a significant improvement in recovery time, hospitalization time, use of pain medications or return-to-work time,” he said.

Individuals seeking a surgical consultation with Carter should visit the Request an Appointment page at the UCSF Division of General Surgery website or call 415/353-2161.