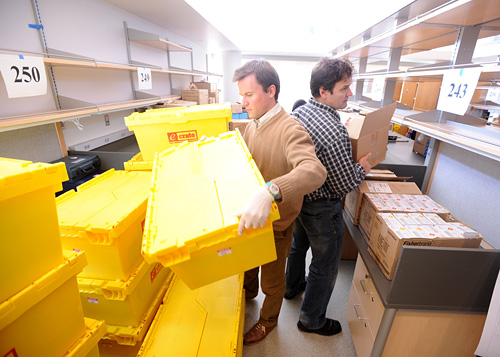 Neurological scientist Russ Pieper, PhD, had a twinkle in his eye as he smiled broadly and bounded up the stairs from the lobby to the second floor through the brightly colored, light-filled atrium of the newly opened Helen Diller Family Cancer Research Building at UCSF Mission Bay.

Just the day before, movers had taken boxes from his old space on the Mount Zion campus and placed them in his new digs in the five-story Diller building, which was designed by internationally known, award-winning architect Rafael Viñoly. Pieper had stayed quite late unpacking his entire office. Next up: his lab.

“It’s a really cool building,” Pieper says. “In addition to being a functional lab, it’s just a nice looking space. See the curved ceiling? The architects are proud of that; it lets in more light.” He points to the window and sweeps his arm up and over the room.

Pieper’s sheer excitement over the new space is palpable throughout the much-anticipated building at the UCSF Mission Bay campus. Planning began in 2000 and more than 300 donors supported the project, which broke ground in April 2006. A landmark $35 million gift from the Helen Diller Family Foundation of the Jewish Community Endowment Fund and a $20 million challenge grant from the Atlantic Philanthropies were critical to the completion of the project.

“The big change for me isn’t so much the lab space,” Pieper continues. “It’s that all the brain tumor investigators are in one place. Until now, we’ve been scattered. And not just in one building – every building on Parnassus, Mount Zion, San Francisco General, Mission Center. Pick a building and we’re there. Now, for the first time in 25 years, all those people will be in the same place: in this building, on this floor.”

In addition to the Brain Tumor Research Center (BTRC), the new building is home to basic science researchers of the Cancer Research Institute and investigators of population sciences, pediatric oncology and urologic oncology. The 160,000-square-foot Diller building will be home to approximately 410 cancer researchers.

“There are some extraordinary people who are going to be in this building,” says computational biologist Ajay Jain, PhD. “We’ve all looked forward to being able to work with them on a daily basis, and we’ll finally be able to do that.”

The new tenants extol the Diller building not only for bringing many cancer researchers together, but also for bringing them into closer proximity to other scientists and scholars at the life sciences research and teaching campus at Mission Bay.

“QB3, Rock Hall, Genentech Hall, the Gladstone Institute and soon the Cardiovascular Research Building are all sites where there are wonderful people working in other disease areas that are highly relevant to cancer,” says biological scientist Allan Balmain, PhD.

Because cancer geneticist Davide Ruggero, PhD, sees the potential for a dramatic increase in collaborations within an already thriving scientific community, he is coordinating an opening symposium in late August.

“Since we’re going to be a heterogeneous group unified in the same building, but coming from different departments and campuses, I thought it would be important for us to get to know each other,” he explains. “For example, I want to know about what they are doing on the second floor in the BTRC. Also, it’s an opportunity for us to introduce ourselves to the Mission Bay campus and foster more scientific interactions.” 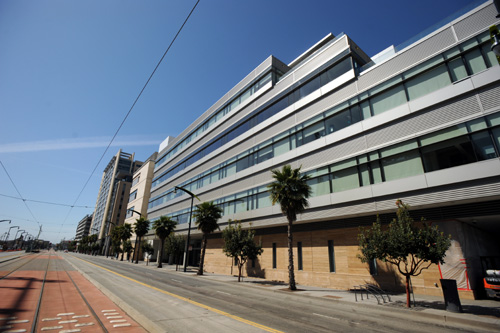 Jain expresses anticipation, too, about the Diller building’s proximity to the planned UCSF Medical Center at Mission Bay, an integrated hospital complex for children, women and cancer patients. “It’s a really big opportunity for people who do basic research to interact more frequently with clinical folks who are out there treating patients,” he says.

The cancer research building at Mount Zion, which opened 10 years ago and is adjacent to the medical center there, will continue to house cancer investigators. Moving into the newly vacated space are scientists in the melanoma, lung, pancreas, and head and neck cancer programs, as well as a center for molecular oncology.

Pieper says that with the existence now of not one, but two designated cancer research buildings, “it’s an opportunity to expand the breadth and depth of all cancer research” at UCSF.

Indeed, the new building will fuel the robust cancer research enterprise that has flourished at UCSF for more than 30 years, harking back to the early 1970s, when Chancellor Mike Bishop, MD, and his colleague Harold Varmus, MD, discovered that cancer occurs when normal cellular genes go awry. This discovery, which led to the award of the 1989 Nobel Prize in Physiology or Medicine to Bishop and Varmus, entirely transformed the field of cancer research.