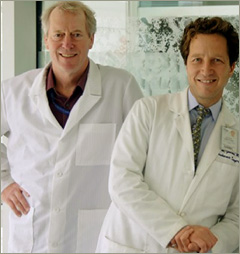 Lung cancer research at UCSF is poised to leap forward, thanks to a big bank. No, not some teetering financial institution down the street. What UCSF has is an invaluable tissue bank.

When it comes to lung tumors, the quantity and quality of UCSF’s chilly-vault holdings are hard to beat. They’re a treasure trove that will help researchers determine how cancer survival odds and responses to treatments are affected by specific genetic abnormalities within tumors - and even by normally inherited variations in genes.

“There are so many genes that are interrelated that we never suspected had anything to do with one another,” Jablons says. “This systems genetics approach to cancer is a whole new frontier.”

The frozen samples were gathered from hundreds of lung cancer patients over more than a decade. For most patients, the tissue bank also holds matching normal lung and blood samples for comparison. Jablons and colleagues have annotated the tissue bank data with information on the clinical care and outcomes for patients.

More to the point for the newest studies, tumors all have abnormal genes, but each tumor exhibits its own individual pattern of abnormal gene activity. It takes many samples to track down the impacts of these genetic differences.

The tumor cells contained in the samples within the UCSF bank will help researchers identify microscopic molecules that can be used to help guide treatment, and will help these scientists envision new treatment strategies for throwing a wrench into the gears that drive relentless tumor growth.

But a person’s normal genes, inherited from mom and dad, also can play a role in how well that person will fare when stricken with cancer. Relatively few researchers have explored the role of normal genetic variations in cancer. Most cancer scientists study the genetically abnormal tumor tissue. In any case, there is a shortage of normal, matching tissue from cancer patients for studying how one’s genetic background influences cancer.

Jablons has led several fruitful research collaborations with doctoral scientists in recent years. Recently, with postdoctoral fellow Dan Raz, MD, he demonstrated that analysis of a small group of genes is a better predictor of lung cancer survival than gauging clinical stage and tumor size among patients diagnosed at an early stage.