Watching a dancer leap, a soccer player dribble or a pianist seduce sound from a keyboard reminds us of the powerful and graceful movements a trained and talented body can achieve. But while we admire what we see, while we marvel at the controlled contortions of arms, fingers and legs, it is what we don’t see – the command centers of the brain – that is due the homage.

UCSF’s Anatol Kreitzer, PhD, assistant investigator at the UCSF-affiliated Gladstone Institute of Neurological Disease and one of the Pew Charitable Trusts’ 20 most promising young scientists for 2008, has kept the brain in mind ever since he made the switch from linguistics to neuroscience late in his undergraduate career.

Movement has become his cause.

Like everything else that seems so simple, movement is complex. What we do and see others do – from speaking to sprinting – is the end result of a sequence of events that begin deep inside different brain pathways. 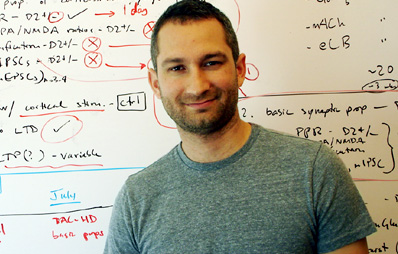 One such pathway originates in the brain structure called the basal ganglia, where, as Kreitzer explains, motor planning takes place.

For Parkinson’s patients, though, the basal ganglia – stripped of the neurotransmitter dopamine that keeps neurons working normally – cannot plan, let alone execute along a pathway. In the end stages of the disease, patients are, as Kreitzer says, “extremely immobile.”

Exploring why this happens – and searching for ways around the problem – led Kreitzer and his colleagues to a class of chemicals called cannabinoids, which break down when the flow of dopamine drops. Using mice models of Parkinson’s disease, Kreitzer was able to transform formerly immobile mice into hyperactive harriers, at least until the drug that blocked the breakdown of cannabinoids wore off.

It’s a big step from mice to humans, of course, but in isolating a treatment mechanism, Kreitzer has now vaulted into the limelight.