In humanity’s universe of greatest fears, spinal cord injury and paralysis play the part of the giant asteroid that crashes into Earth. Nothing is ever the same again.

Jacqueline Bresnahan, PhD, and Michael Beattie, PhD, lead investigators in UCSF’s Brain and Spinal Injury Center, might not be able to save this world. But as spinal cord experts with a combined 40 years of research experience, they hope to be able one day to repair it.

Ironically, it is the body’s own attempt to heal itself that worsens spinal cord injury. Despite popular belief, the husband-and-wife team explains, few patients truly suffer a severed spinal cord. Damage comes instead from the crushing of the vertebrae and the severe bruising that quiets the signals between the nerve cells and the brain.

As axons try to recover and reconnect, the body mounts an inflammatory response, generating scar tissue that blocks the restoration process. Indeed, except in the most extreme cases, some function persists immediately after injury. Saving some nerve function might not prevent paralysis. But it could limit paralysis, dramatically improving the quality of life as a consequence. 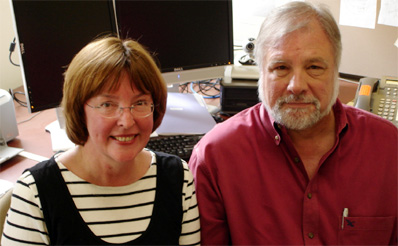 This is why Bresnahan and Beattie’s presence at San Francisco General Hospital (SFGH), which boasts one of the nation’s premier trauma centers, is critical to their translational research. SFGH is where some of the nation’s thousands of car crash, sports injury and other patients with spinal cord injuries arrive first. And it is there that multidisciplinary teams work feverishly to stabilize patients and arrest what Beattie calls the death of neurons.

Progress has been slow. But as their work continues and as the explosion of knowledge in cell and molecular biology lights up the darkness, Bresnahan and Beattie see a different future – one where initial damage is controlled and where those living with spinal cord injury regain function, thanks to stem cell transplants.

Pie in the sky? Well, tell that to the hundreds of thousands in America alone who must live with their injury every day. They might not be able to turn back the clock, but they are certainly rooting for Bresnahan and Beattie to reset it.