Author Harriet Washington, who chronicled the history of clinical experimentation on African Americans, drew a standing-room only-crowd to a lecture room at UCSF on Nov. 29. Renee Navarro, MD, director of academic diversity, introduced Washington to the audience gathered at the UCSF Parnassus campus. "It is important for those of us in the medical community to gain awareness of the history because it provides a richer cultural context when engaging the African American community and our patients," said Navarro. Washington, a journalist, bioethicist, former Knight Fellow in journalism at Stanford University and former ethics fellow at Harvard Medical School, gave a synopsis of her recently published book, Medical Apartheid: The Dark History of Medical Experimentation on Black Americans From Colonial Times to the Present. The book cites instances from throughout US history where medical schools disproportionately used African Americans in clinical trials and live surgical demonstrations. Washington was drawn to the topic because she wanted to examine the relationship between African Americans and the US health care system. "I'd always been troubled by my perception that many black people were leery of medicine and seeking care, even when it was in their best interest," said Washington. "When I began working in a hospital, I heard these same fears intensified." While an undergraduate student at the University of Rochester, Washington discovered that physicians dismissed the fears of many of their African American patients. "There was a perspective from the physicians that black people were fearful for no good reason," she said. Washington's book uncovers the horrific details of several experiments, including one of the most notorious medical experiments, the Tuskegee trials. For 40 years, from 1932 to 1972, the US Public Health Service (PHS) conducted an experiment on African American men who suffered from syphilis. The PHS, which lured the men with the prospect of free medical care and meals, withheld treatment. As a result, hundreds of men died slow, painful deaths. Washington believes the emphasis placed on Tuskegee has actually led to the perception that such clinical trials were a onetime incident, thereby supporting the notion that the fears of individuals in the African American community are unfounded. 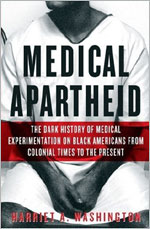 In pointing to the lack of underrepresented groups in clinical trials, Washington encourages the medical and scientific community to look at history to gain understanding of the present situation. "The focus of how do we get people of color into trial -- that's a researcher's focus," she said. "The question asked by the potential African American subject is 'How can I be sure that this [trial] is actually going to ameliorate my health or be positive medical research, not harm me, not harm my group by perpetuating a negative stereotype?'" Washington believes that in understanding history, science can move forward. She hopes that the history of experimentation on African Americans can be a part of the medical school curriculum. "If you go to a medical school and you look at the history of medicine shelves, you find certain events have received so much coverage, like the works of Dr. Mengele," said Washington. "But why have the things that I've written about, which were not difficult to find, received so little attention?" In reading about the events in Medical Apartheid, Washington hopes the medical community can better understand the present circumstance of underrepresentation of African Americans in clinical trials. Promoting Access, Awareness Mack Roach III, MD, chair of the UCSF Department of Radiation Oncology, agrees, but doesn't see history as the biggest factor in getting African Americans to participate in clinical trials. "The fact that African Americans have been experimented on in-justly, there is no question," he said. "But that is not our biggest problem today. The problem with a lack of African Americans in certain types of clinical trials is due to the lack of awareness of certain trials and access to trials." Roach is recognized as one of America's leading authorities on the use of radiation to treat localized prostate cancer and as a prominent crusader against health care disparities. He has chaired the Special Populations Committee of the Radiation Therapy Oncology Group since 1995. As the study chair of a large national prostate cancer study trial, Roach saw impressive results of nearly 25 percent of the men in the trial who are African American. Roach attributes the high number to several factors. "Most of the institutes conducting the trial were located in urban areas, and there are high concentrations of African Americans in inner cities," Roach said. "Also, there is an awareness of prostate cancer in African American communities, since African American males are more likely to be affected." Roach said that outcomes could improve, but he noted that African Americans tend to stay away from certain trials. As a result, African Americans are at a disadvantage for treatment of prostate cancer. "I went to a barbershop in Virginia, and a couple guys were quoting the Tuskegee study and they had their facts confused," he said. "Awareness of history is important, but it's a double-edged sword. It can lead to fear and keep African Americans away from trials, which would benefit them and the research community." "Having accurate knowledge of the past coupled with acknowledgement of previous transgressions sets the foundation for enhancing cross cultural relationships," said Navarro. "These relationships build trust and provide opportunities to engage the community to approach our institutions and participate in all of the services provided." The lecture by Washington was sponsored by several groups at UCSF: the Center for Gender Equity, Student Activity Center, UCSF Chapter of the American Medical Students Association and UCSF Affirmative Action and Equal Opportunity and Diversity, UCSF Health Disparities Working Group and the Program in Medical Education for the Urban Underserved.