Women who visit doctors with complaints about facial hair, bad acne and rapid weight gain may not always be taken very seriously. They might simply be advised to lose weight. But these complaints about appearances may be a clue to the presence of polycystic ovary syndrome (PCOS), now known to hasten the onset of potentially life-threatening health problems. PCOS is the most common hormonal disorder among women in their reproductive years, affecting more than one in 20 by some estimates. Three million or more US women have PCOS. PCOS is not only a leading cause of female infertility, but also poses a major risk for diabetes and heart disease. The risk is real, even for many PCOS patients who are not overweight. Fortunately, physicians in growing numbers now are alert to PCOS symptoms and to the potentially serious complications of the syndrome, and they are more likely to evaluate women for a possible diagnosis. Unfortunately, the biochemical basis for the disorder still is not known in detail. That makes it difficult to devise treatment strategies to prevent complications. UCSF pediatric endocrinologist Walter Miller, MD, is one of the few searching for the biochemical basis of PCOS.

Symptoms of PCOS vary. Women with the disorder do not necessarily have cysts in their ovaries  despite the syndrome's name. It's true that losing excess pounds can dramatically reduce PCOS symptoms. But now it is clear that there also is a genetic component to PCOS. However, just as PCOS manifests itself in a variety of ways, different genes may guide the development of different forms of the disease, Miller notes. "PCOS is probably a group of a half-dozen or more distinct disorders that all look sort of the same to a clinician," Miller explains. 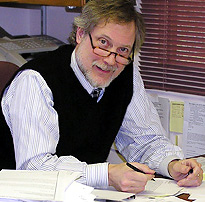 PCOS was first described in the medical literature in the 1930s, Miller says. "It was whimsically called the hairy ovary syndrome because women would have cysts in their ovaries, and the principal clinical manifestations were irregular menses and hirsutism." But very few women will have all of the symptoms that have been associated with the syndrome, Miller says. What most women with PCOS share is production of greater than normal amounts of androgens  sex hormones, including testosterone. Miller is trying to identify the biochemical basis for this androgen overproduction.

Why is a pediatric endocrinologist like Miller interested in a syndrome that afflicts grown women? Miller is one of the world's foremost experts and researchers in steroid biosynthesis  the stepwise formation of dozens of steroid hormones that all start out as cholesterol. These steroids include the mineralocorticoids, which are vital in the regulation of blood pressure, salt and water; the corticosteroids, which govern stress responses; and, more to the point, sex steroids, including estrogens, androgens and progestins. Miller has a longstanding interest in a hormonal and developmental phenomenon known to pediatricians as premature adrenarche. Adrenarche occurs when a child's adrenal glands start producing the steroid DHEA. Adrenarche is part of normal development during ages 8 to 12, Miller explains. DHEA is a building block used to make sex hormones and other steroid hormones. Adrenarche precedes and is independent of puberty. Children with premature adrenarche begin making DHEA and sex hormones earlier and in larger amounts. Furthermore, epidemiologists have determined that girls who undergo adrenarche prematurely are more likely to become women with PCOS. Girls with premature adrenarche come to medical attention more often than boys with the condition, although  apart from the link to future PCOS and its complications  the condition is essentially benign from a medical perspective, according to Miller. PCOS in adult women often is not benign. "Many but not all women with PCOS have what is now called metabolic syndrome  disruption of lipids, insulin resistance and increased risk for type 2 diabetes, obesity," Miller says. Although both androgen overproduction and insulin resistance appear to develop early in PCOS, according to Miller, "No one has been able to propose a simple, logical, biochemical mechanism that links the increased androgen synthesis in both the adrenal gland and the ovary to insulin resistance."

Search for an Enzyme That Is a Likely Culprit

But Miller thinks he has a good hunch. While some researchers are conducting gene searches on families with multiple cases of PCOS, Miller instead is taking a biochemical approach in seeking the origins of this clinical problem. Miller earlier discovered how a single enzyme  called P450c17  can trigger production of both cortisol and DHEA  even though cortisol is produced from infancy on, while DHEA production is not triggered until adrenarche. Miller found that these enzymatic activities can be controlled separately by P450c17. His lab team discovered that another enzyme donates electrons to spur P450c17 to make DHEA at adrenarche, independent of cortisol production. What led Miller to the idea that insulin resistance and androgen excess might be closely linked biochemically was the realization that yet more enzymes act on P450c17. Miller showed that another enzyme attaches phosphate molecules to serine molecules that are part of P450c17. This biochemical event also contributes to P450c17's capability to activate DHEA production. Other researchers found that the insulin receptor, which straddles the cell's outer membrane and transmits insulin's signal to the inside of the cell, was similarly phosphorylated. But this phosphorylation of serine in the insulin receptor made the receptor less likely to transmit the hormonal message. Miller strongly suspects that there is a single enzyme that similarly adds phosphate molecules to both P450c17 and the insulin receptor. If this enzyme is unusually active  due to genetic variation or through some other biochemical influence  it could result in both the androgen excess and insulin resistance observed among women with PCOS. There is a finite list of suspect phosphorylating enzymes in this category, called serine kinases. But the suspects still numbers in the hundreds, and some have never been studied before. Miller's lab team is still working its way through the list. "Once we find the kinase  and eventually we will  there is no guarantee that it will be the answer to PCOS," Miller says. "But even if it's not, we can see how the kinase is controlled biochemically and genetically, and that should lead us to the real culprit genes  which we can then validate through studies of families where PCOS seems to be inherited in a genetic fashion."