Life is complex. This we know. But when you’re a pharmaceutical scientist, the statement carries a quantifiable weight that a mere social observation does not.

I was reminded of this fact in the past week in a conversation with Tom Ferrin, PhD, professor of Pharmaceutical Chemistry and Biopharmaceutical Sciences and director of the Resource for Biocomputing, Visualization, and Informatics.

Ferrin is a drug hunter, a soft-spoken, but passionate man who has inherited UCSF’s rich legacy as the world’s leading simulation, virtual screening and visualization center.

Bluetongue virus infects cattle, sheep and goats and has caused epidemics effecting millions of animals with large economic impact. This crystal structure shows the virus capsid with viral RNA sticking to the outside. The stickiness is thought to sequester viral RNA preventing an immune response in host cells. Atomic contacts between RNA and capsid within 5 angstroms are shown in black.

Yes, this is San Francisco, but the visualization I’m talking about has nothing to do with Zen, chi or chakras. What Ferrin and his pharmaceutical chemistry colleagues at UCSF’s School of Pharmacy seek to see and interpret are molecules and their interactions. And they want to be able to see, manipulate and analyze them on their computer screens in three dimensions.

This is a huge and daunting task – made even more so by the deluge of biological data emerging from the many gene sequencing projects around the globe – and one that requires special software and vast amounts of processing power to execute.

Error displaying Flash content. You may need to update your Flash Player or add-in.

Organization of the satellite tobacco mosaic virus genome. Single strand RNA, 1058 nucleotides, depicted as a tube with A, C, G, U shown in red, yellow, green, and blue.

Error displaying Flash content. You may need to update your Flash Player or add-in.

UCSF researchers are the champions of the computational and visualization software world, having – at last count – issued some 85,000 licenses to industry and universities for just one of the newer packages known as Chimera.

The first computer-based molecular docking software program, called DOCK, was developed at UCSF’s School of Pharmacy by Irwin Kuntz, PhD. DOCK revolutionized the field in the 1980s because it calculates and displays in three dimensions how potential drugs might attach to target molecules. 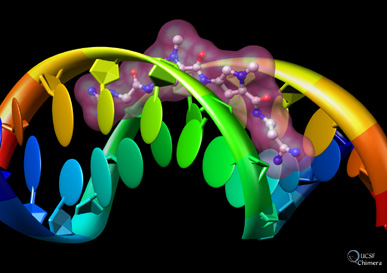 Netropsin bound to double-stranded DNA (PDB entry 6bna). The DNA has been colored with the command rainbow and is shown with smooth ribbons, stick bonds, and special representations of the sugars and bases. Netropsin is colored by element and shown in the ball-and-stick representation, with a transparent pink molecular surface. Water has been undisplayed.

As Ferrin reminds us, this allowed libraries of compounds to be virtually screened in weeks, not years, speeding up the entire process of drug development and saving incalculable amounts of money along the way.

At the same time, AMBER became one of the first and most widely used computer models of biomolecules and drugs. AMBER has been used for designing drugs, for predicting the effects of mutations on proteins, and for understanding the structures and properties of proteins and DNA molecules. Midas and Chimera followed.

These tools are now essential and ever-evolving. To understand just how essential, consider this. “Since any protein can theoretically interact with another, if humans have an estimated 100,000 proteins, you see how large the number of possible combinations there are,” says Ferrin.

Sometimes, for the lay reader, the significance of this software feat is not easy to grasp. But reading slowly and thoughtfully through this excerpt from Ferrin’s own webpage should at least give you a sense of why UCSF has become such a hotbed of computational innovation, and a place where such knowledge is widely shared with the world. 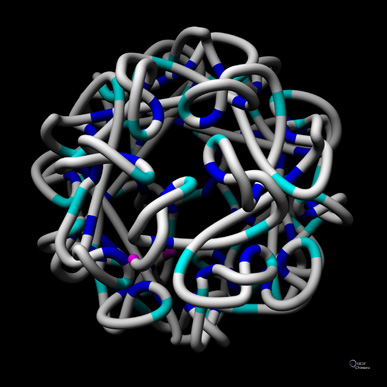 Modeled path of approximately 1000 nucleotides of single stranded RNA in satellite tobacco mosaic virus. Crystal structure 1a34 contains 60 segments of 9 bases each that can be linked to form a continuous strand.

“Making this information available to the scientific community through facile web-based interfaces is a considerable challenge, but crucial if others are to benefit from and build on our work, and hence constructing searchable and extensible databases using, for example, object-oriented programming techniques are required. We are incorporating these approaches and others into integrated systems for molecular recognition in applications such as drug design, protein engineering, biomaterials design, and bioremediation.”

Semliki forest virus. The bowl of smoke is a 9 angstrom resolution density map from electron cryo-microscopy. The density map is sliced in half with colors from red to blue showing low to high density values on the cut surface. A capsid protein forming a shell inside this enveloped virus is shown in blue, green and pink. 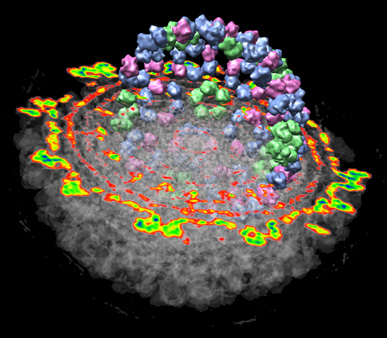 Semliki forest virus. The bowl of smoke is a 9 angstrom resolution density map from electron cryo-microscopy. The density map is sliced in half with colors from red to blue showing low to high density values on the cut surface. A capsid protein forming a shell inside this enveloped virus is shown in blue, green and pink.

There is beauty in this complexity, a fact that is readily obvious when you scan the Chimera image library.

There is a profound lesson, too: We have a lot left to learn.

Maybe we should ponder that reality the next time we complain about a drug’s effectiveness or blithely pop a pill, oblivious to the inner world of interlocking systems it is about to change and to the intelligence of those like Ferrin who provided the first clues to how and why it might work.

Yes, life is complex. And just as there is no free lunch, there are no simple solutions to disease, either.