You don't need a hard hat in Christopher Voigt's lab at UCSF Mission Bay. But don't be fooled. This is a design and construction zone with renderings and circuit grids just like any other. Only these plans are alive. Literally. And what they produce could change everything from how we treat disease to how we clean up toxic waste.

"I'm in awe of biological systems," says Voigt, an assistant professor of pharmaceutical chemistry in the School of Pharmacy and member of the California Institute for Quantitative Biomedical Research. "Even simple systems are so integrated and refined."

Yet awestruck does not mean dumbstruck. Voigt is a chemical engineer, with a PhD degree in biochemistry and biophysics. As such, he has an irresistible urge to peek behind the curtain, tinker in life's workshop, and find out what makes things work — and how this part and that part can be fitted elsewhere to create something entirely new and useful.

The results? Something commonly known as synthetic biology, made up of what Voigt calls "toy systems." Examples from Voigt's workbench would include bacteria that take pictures (a kind of living lithography) or align into a sharp edge. The principles that emerge from the toy systems can then be applied to biotechnological applications, such as making spider thread by the yard or targeting tumors. It's all part of his plan to develop a basis by which cells can be programmed like robots to perform complex, coordinated tasks for pharmaceutical and industrial applications.

"We construct living systems that might not be at all what nature does," Voigt says, "but they satisfy our need to put things together in a particular way to do what we want, just like genetic robots. Of course, understanding first how biology solves a problem is important to understanding the pieces you expect to put together, what kind of computations you expect a cell to perform, and how they are rewired in different contexts.

"You also need to know which pieces of DNA transfer easily between species. Bacteria frequently exchange pieces of DNA with their environment. So, for example, if there is a piece that's been integrated and swapped many times between organisms, then that implies that we're going to be able to put it into our host and have it function in a way that is modular and robust."

What are some of these modular elements? Well, bacteria react to stimuli; they have sensors and circuits that can be manipulated. Bacteria such as salmonella also have a secretion system to get their poisonous proteins into human cells. So why not rewire the system, connect it to an improved version of a spider's finicky web-generating machine, and then use it to essentially farm and harvest spider fibrils instead — fibrils that are 10 times stronger than Kevlar and biodegradable to boot?

Consider that image for a moment: a spider silk spinning out of vats of bacteria.

That should be patented, don't you think? Voigt — who, when not assembling Legos or drawing pictures as a kid, was taking apart and rebuilding old television sets — forms a "yes-we've-taken-care-of-that" smile and moves on.

"Some people dismiss what we're doing as parlor tricks, but there is always an underlying design principle we're testing," he says. These principles usually take shape in Voigt's mind, a place where art meets calculus. "From the beginning, I'm interested in how you will display the information you get from an experiment. How do you make a particular point come across? If I end up with something that can't be visualized or easily explained, then I don't go down that path."

Not that Voigt confuses ease with easy. The output might be visual and accessible, but his focus is, as he says, on the innards. "When we did the bacterial photography, we needed to create a new light sensor. We also had to perform some metabolic engineering to create the sensor. There were also genetic circuits that had to be constructed, and it required about 6,000 bases of designed DNA. So while the public saw the little pictures in the petri dish and got excited by that, our deeper goal was to learn how refined a DNA function we could construct and control."

At this point, one expects to hear the "playing God" question, so I ask it. Interestingly, Voigt says journalists are usually the only ones who raise the issue these days. The public he speaks to seems to understand that these techniques "can be used to solve problems in society, from making stronger biodegradable materials to converting us from a petroleum-based economy. They also recognize that it is OK to pursue an idea that doesn't necessarily tell you anything new about biology." 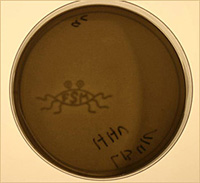 Living photograph: Scientists at UCSF and U. of Texas have been creating living photographs by genetically engineered microbes to become "biological film." Bacteria exposed to light produce dark pigment, while those in the dark do not. Photo/Aaron Chevalier (UT-Austin)

The irony is that in doing so, Voigt has evolved into the "design engineer" he dreamed of becoming as an eager high school student, before learning in college that such a specialty did not exist. The best analogy is one that Voigt uses for his own tailored biological creations. "Airplanes fly, but they're not birds. A different set of design principles leads to the same end."

Such flexibility says something wonderful about Voigt's version of modern science. Genomic discovery has put a lot of new ground under science's big top, and while I hesitate to call what is happening in labs around UCSF a three-ring circus, there is some truth in the image. There is a lot of juggling and high-wire acrobatics as information pushes forward from the wings, clamoring to become knowledge. Inspired performance is the norm and, as a synthetic biologist, Voigt is one of a new breed of ringmasters. How well he manages this parade could go a long way toward determining whether his branch of science will be center pole or sideshow.