Medical doctor, economic expert and anti-apartheid activist Mamphela Ramphele, MD, PhD, sounded an alarm about women's health and maternal morbidity in sub-Saharan Africa. "We have the science, the technology and the resources for safe pregnancy and motherhood, yet half a million women die annually in sub-Saharan Africa. This is a scandal," said Ramphele. "Maternal mortality is the starkest indicator between developed and undeveloped countries. How can we look at ourselves in the mirror as long as these medieval conditions still exist in the 21st century?" Ramphele delivered the keynote address at the recent UCSF Global Health Sciences spring symposium titled Science, Technology & Health in Africa. Haile Debas, MD, executive director of Global Health Sciences, and Bruce Alberts, PhD, UCSF professor of biochemistry and former president of National Academy of Sciences, introduced Ramphele and the other two speakers, Narciso Matos, PhD, and Winston Soboyejo, PhD. They all offered different perspectives regarding Africa's lack of educational and scientific infrastructure and the role of capacity building needed to improve health care and move African countries out of poverty. 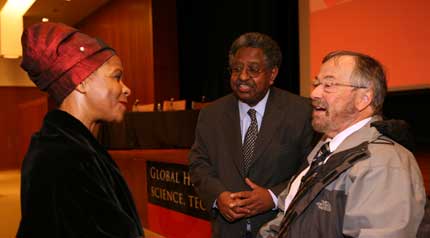 For her ongoing activism and advocacy in community health, Ramphele received the 2007 UCSF Medal, the University's most prestigious award given annually, during a special event last Thursday. A native of South Africa, Ramphele earned her medical degree in 1972 from the University of Natal and became a leader in community health programs and an anti-apartheid activist. In the late 1970s, she was prosecuted, detained and banished to a small village in the north of South Africa, where she continued working with poor, rural communities. In 1991, she earned a PhD degree in social anthropology from the University of Cape Town, where she later was appointed vice chancellor. In 2000, she became the first South African to join the World Bank as one of four managing directors, focusing on the role of capacity building in science and technology. With her expertise in economic development, she is currently chair of Circle Capital Ventures, a black economic empowerment company. An Economic Problem During her speech, Ramphele encouraged professors, doctors, scientists and policymakers to advocate improved women's health conditions, based on economic rather than charitable grounds. "Instead of appealing to people's compassion and morality to donate money, we should present it as an economic problem," said Ramphele. "When women are healthy, they continue working, which not only sustains themselves, but entire villages, as well as improves chances for their children to join the workforce. Allowing women to die weakens the country's capital base and the overall prosperity of the economy." Most women in sub-Saharan Africa lack basic knowledge regarding pregnancy and have no access to safe and effective health care, Ramphele said. This lack of education and health care leads to nearly 500,000 deaths annually, or one-fifth of the world's death toll. Nearly 40 percent of infant deaths result from illness during pregnancy or complications in delivery. And there are 75 million unplanned pregnancies, with one-third of those leading to unsafe and often lethal abortions. Along with inadequate support for women's health, Ramphele pointed to gender disparities on a global scale. "Women's health is not a priority, even among women in power, because women are socialized to suffer and be the bearers of grief and mourning," she said. "Maternal health concerns are simply seen as 'women's issues' and the suffering is accepted as part of motherhood. We are socialized to suffer in silence." Ramphele offered hope in her speech, describing ways to improve the quantity and quality of aid for upgrading infrastructure, particularly in schools, mental health services and education regarding pregnancy and HIV, tuberculosis and malaria prevention. "Women's health is a concern that defines all of us as global citizens; it's not just a concern for women," said Ramphele. "I believe that we can use the umbrella of 'global health' to advocate for women's health. We have the knowledge and resources. The question is whether we have the will to close the gap between what we 'know' and what we 'do.' I challenge you to ask yourself: 'Why do we continue to permit this gap to exist?'" Related Links: Global Health Sciences Prescription for Africa: Increase Education's Reach and Grow Science and Technology Networks
UCSF Today, May 10, 2007 Chancellor to Award UCSF Medals to Four Leaders
UCSF Today, April 27, 2007 Chancellor to Award UCSF Medals to Four Leaders
(Videos) Photos/Elisabeth Fall