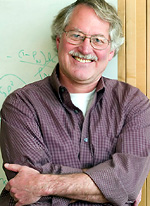 In the first installment of Bring Back the Ivory Tower, UCSF biophysicist and School of Pharmacy protein expert Ken Dill spelled out the dismal state today of deep innovation in academic science. He also decried the funding hole that divides biomedicine, which is represented by the National Institutes of Health (NIH) and physical science research, which is championed by the National Science Foundation (NSF).

As a result, Dill continues, much of the grant-funded science has become incremental and predictable. "The NIH is a mission-driven agency," says Dill. "Its mission is to support biomedical research that will pay off for the public." The NSF, on the other hand, is a discipline-driven agency. It functions by research fields, such as chemistry and mathematics.

The paradox, argues Dill, is that new discoveries need both perspectives. Or, to steal a lyric from singer/songwriter Tracy Chapman, "There is truth in the space between."

And, let's not forget, there is also mystery. Perhaps that explains Dill's interest in pre-biotic evolution and one of the biggest ivory-tower scientific questions of all: How did life on earth begin?

Many molecular evolutionists now believe that before DNA became the top dog, RNA ran the show. RNA can encode and catalyze, after all, and its continuing role as DNA messenger and presumed role as gene regulator speak to its enduring importance in living creatures.

As impressed as he is with the RNA world, though, Dill still has doubts, and in his big, blue-sky moments, he wonders whether something else came first, maybe a metabolism world — essentially a giant chemistry experiment, occurring naturally and spontaneously.

"When you think about RNA, it's a pretty complicated feature to leap onto the scene in full flower and ready to start propagating. There had to be something that the RNA world wanted to propagate forward in the first place."

But how would a metabolism-first world work? How would the chemicals organize themselves in one way or another? And how would you test for answers?

"We have an idea how this might happen. It has to do with enzymes. We've just submitted a paper that presents our ideas," says Dill. Implicit in these ideas is a daring model that will shape the experiments that could prove or disprove his premise. "Modelers like me are supposed to be bold, to make predictions that people aren't expecting, to ask questions that experimentalists aren't already asking."

Let's pause a moment to think about what Dill is saying. Before Einstein, for example, Nobel Prizes in physics were all given to experimentalists. Theoretical modeling became prominent in physics only after it started making accurate predictions of things that were not already pretty obvious — in the theories of relativity and quantum mechanics, for example.

Dill believes biology needs a similar shot in the arm, a theoretical boost of the first magnitude. And to make that leap, scientists need to get off the treadmill, step out of the stream, dream a little again. "At this moment in biology, theory usually follows experiments, rather than preceding them."

So what is the solution? One possibility is higher-risk grants. In short, proposals would be short, a page or two, not 25 single-spaced pages long. Moreover, approvals would be based on the passion, persistence and track record of the scientist, and on the proposal's novelty, not its predictability. Risky? Yes, and definitely not for everyone.

"If you look at any economics book about investments, you're always told to put a little into high-risk investments. That's all we're saying about grants. Let's put 1 to 10 percent into high-risk stuff." For Dill, scientists are the "stuff." Put smart scientists in a room, let them think, and great ideas can surface. "It's just like Google," Dill adds. "Google employees are encouraged to play for 10 percent of their workday because that's when inspiration comes."

And new ideas are urgently needed if America is to retain its scientific preeminence and all the economic vitality that comes along with it. "We used to get the world's best students studying in US labs. But there's a lot more competition now," Dill explains. Indeed, India, China, Singapore and a resurgent Europe are beginning to capture the fancy of the brightest students, as well as prime their own student pipelines with rigorous educational standards. "These other countries are making long-term investments in people and facilities. China is building dozens of new research universities. Singapore already has Biopolis [a life sciences city and "thought" center], and is making plans for a comparable computer science center too."

American students could fill the gaps, of course, yet Dill worries that too few of them think of science and mathematics as worthy careers. "I wish more American parents would help their kids understand the importance of these subjects. In other countries, many parents and kids see science as the future. There's no comparable national vision here."

There is growing political awareness, however, Dill happily reports. In fact, Dill, together with representatives in a 280,000-member coalition of science societies, has found bipartisan support for what might be called our innovation infrastructure. The various elements of — and the reasons for — the plan, many of which have been discussed in Science Café, have been packaged into something called the American Competitiveness Initiative, which commits US $5.9 billion in fiscal year 2007 to "increase investments in research and development, strengthen education, and encourage entrepreneurship."

What happens next on Capitol Hill is unclear. What happens next in Dill's UCSF lab is completely transparent. At a time when basic science has become a bottom line business, Dill, when not on the road, will be retreating to his ivory tower for some serious playtime with ideas. He hopes that everyone else in academic science will soon be doing the same.