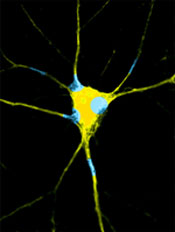 New research on living neurons has clarified how the brain refreshes the supply of molecules it needs to make new memories.

The discovery by scientists at UCSF is reported today in the December 22 issue of the journal Neuron and is featured on the journal’s cover.

Memory formation is thought to involve a strengthening of the communication between neurons in the part of the brain known as the hippocampus. Researchers know that this increased communication results from a surge in the number of receptors on one neuron that is available to bind to the neurotransmitter glutamate released from another neuron. The two neurons meet at a synapse.

But how and from where the brain gains fresh supplies of these crucial receptors has remained unclear. Known as AMPA receptors, they are essential for the rapid connections made between nerves during learning.

The scientists sought to answer this question by studying the basal trafficking of receptors—the normal process by which receptors are replaced from fresh stores that are synthesized and located inside the cell. Focusing on live neurons cultured from rats, they discovered clear evidence to dispel the prevailing view that receptors at the synapse are constantly being replaced by stores inside the cell. Rather, the scientists found that the synaptic receptors are relatively stable, lasting about 16 hours before they are replaced.

The study also supports an unsuspected route by which new receptors make their way to the synapse: Fresh AMPA receptors appear to be placed on the cell surface at the cell body and then migrate along the arms or dendrites of the cell to synapses, rather than moving within the cell to the synapse as had been thought.

The scientists suspect the trafficking process their research revealed also occurs during learning and memory formation, but at a much faster rate. The study may provide insight into how to treat memory disorders, said Pam England, PhD, assistant professor of pharmaceutical chemistry at UCSF and senior author on the study.

A number of studies have suggested that synaptic AMPA receptors are constantly and rapidly being replaced by receptors from inside the cell to permit rapid regulated changes in the number of receptors, England explained. “Our study suggests that the source of increased receptors during learning or memory formation is probably from receptors traveling along the neuron surface.”

The team used a novel molecule to selectively “silence” AMPA receptors on the neuron surface and show that receptors inactivated at synapses were not rapidly replenished by receptors inside the cell, as had been thought.

The silencing molecule, known as ANQX, is activated by exposure to brief pulses of ultraviolet light, so the scientists could shine light on neurons treated with ANQX and inactivate AMPA receptors on the neuron surface. Researchers then could use continuous electrophysiological recordings to measure the “recovery” - or replacement—of these inactive AMPA receptors with fresh ones, as evidence by restored electric current through the receptors.

The use of a light-activated silencer allowed the team to study naturally occurring receptors, rather than genetically modified receptors, which might not traffic normally.

“This way, we could study the effect on the neuron before, during and after inactivating the receptors,” England said. “This is a direct, quantitative measure of native AMPA receptor trafficking in real time.”

The scientists hope to next study AMPA receptor trafficking in response to increased neuronal activity, in order to provide more insight into the mechanism underlying learning and memory.

The research is supported in part by the National Institutes of Health, the Sandler Family Supporting Foundation and the Howard Hughes Medical Institute.

IMAGE AVAILABLE: An image of a neuron used to study how the brain acquires fresh supplies of memory-making molecules can be viewed at: Memory-making