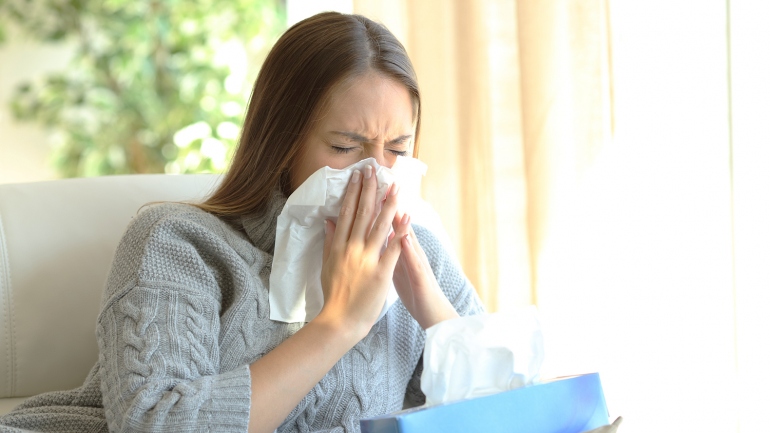 This year’s flu season has hit the United States hard, with nearly every state reporting widespread influenza activity in early January. In California, at least 42 people under the age of 65 have died from the flu, and the season may have yet to reach its peak.

The rapid spread of the flu has led to many questions, including why it appears to be unusually severe this year, whether the vaccine is effective and how people can avoid catching the flu.

UC San Francisco’s Charles Chiu, MD, PhD, associate professor of laboratory medicine and of medicine and the director of the UCSF-Abbott Viral Diagnostics and Discovery Center, is an expert in infectious diseases, both rare and common. He answered some questions about this year’s flu season.

What has made this year’s flu season particularly bad?

The predominant strain of influenza infecting people this year is called influenza A H3N2.

Among these five common strains that circulate among humans on an annual basis, the most virulent is H3N2, which has been linked to more severe disease, with increased hospitalizations and number of death.

So the key question becomes: why does it seem as if there are more cases, and more severe cases, this year as opposed to previous years?

Is there a reason the flu season started early this year?

The status of the influenza season in the Southern Hemisphere generally predicts what’s going to happen in the Northern Hemisphere. In Australia, the identical H3N2 strain caused over 230,000 confirmed infections, more than any other year, so the high reported incidence there might be a reason we’re seeing it earlier here.

Is it too late in the season to get vaccinated?

It’s definitely not too late to get vaccinated. We probably haven’t seen the peak of the season yet.

By getting vaccinated, you not only lower your probability of getting the flu, you also help prevent transmitting it to others and help provide “herd immunity” – protecting the weak and vulnerable from infection when enough of the population is vaccinated. And if you do get the flu, it may lessen your symptoms.

One thing to keep in mind is it takes two weeks for your body to generate the antibodies following vaccination.

If someone thinks they have the flu, what is your best advice?

The standard advice to help prevent transmission is to wash your hands rigorously, avoid contact with other people, and to cough into a tissue or the crook of your elbow, not into your hand.

The first couple days of symptoms are usually when you’re most infectious because that’s before your immune system has begun to quell the infection, and so the viral loads in your infected bodily secretions (e.g., mucus and saliva) are the highest. If you’re actively symptomatic, it’s probably better to skip work or school to avoid spreading it to others.

If you do develop more severe manifestations of the flu, such as several days of symptoms without improvement, having trouble breathing or chest pain, dehydration, being unable to hold down liquids with nausea and vomiting, then medical attention is needed. These are indications for going to the emergency room or clinic and getting seen by a physician.

How does the effectiveness of this year’s vaccine contribute to the severity of the season?

There is mounting evidence that the vaccine this year is less effective, especially against the predominant H3N2 strain, and that’s for a couple of reasons.

One reason is that the strains are not updated yearly. For H3N2, the last time this specific strain was updated was in 2014. The virus itself will continue to mutate from year to year – a process referred to as antigenic drift – and over time it becomes less well matched to the vaccine strain, meaning that the antibodies you generate from getting the vaccine may be less effective in neutralizing the circulating virus.

A second reason is that vaccine manufacturers typically grow the vaccine in eggs and the process of growing in eggs actually induces mutations. A paper published recently showed that the H3N2 vaccine strain with egg-based mutations was less able to mount an immune response against the circulating H3N2 strain.

So, due to natural changes in the virus as it evolves, as well as due to mutations that may be caused by growing the vaccine strain, the circulating virus and the vaccine become less well matched over time.

Why not update the vaccine strains every year?

It is actually a huge effort to update the vaccine. You have to ensure that using a new strain is safe, that the seed stock is not contaminated. And every strain can be subdivided into smaller subclades.

For H3N2, there are actually at least six different subclades and it becomes a guessing game. Is it worth it to switch to a more recent subclade if an older subclade may predominate next year? For these reasons, vaccine strains are typically updated every couple of years. But I think it’s very likely, depending on how this season goes, that next year the H3N2 strain will be updated.

What makes H3N2 more virulent than other strains?

We don’t really know for sure. Influenza consists of two types of surface proteins, hemagglutinin (HA) and neuraminidase (NA), and influenza strains are based on different combinations of HA and NA genes. Small differences in these genes, or in other viral genes, can account for differences in virulence as well as how infectious an individual strain is.

H3N2 has also been linked to co-infections from another pathogen, especially the bacterium Staphylococcus aureus, resulting in a severe pneumonia, which can be life-threatening.

With the limitations of the current vaccine, researchers have been working on a so-called universal vaccine. How would that work, and do you see that being available anytime soon?

The idea behind a universal vaccine is to have one that could handle all the common strains of the virus even as they mutate, unlike what we’re currently doing, which is basically cherry picking the strains we predict are most likely to be involved next year.

The problem is, the exposed outer knob regions of surface proteins HA and NA, which are the basis for the antibody response to the current vaccines, are the most likely to mutate. Instead, you may want to generate antibodies targeting either the stem region of the HA and NA proteins, or a different protein in the virus, such as the matrix or polymerase protein, which are less likely to mutate because if they did, it would probably render the virus nonfunctional.

A third approach would be to develop a “super vaccine” that triggers antibodies to cover all of the potential mutations of these NA and HA proteins.

The hope is that by testing a variety of strategies we’ll eventually end up with a universal vaccine that would be durable over time and would not need to be changed on a yearly basis. But I would say it’s at least five to 10 years before one becomes available – although the sharp increase in cases this year might encourage a more concerted effort.

How does the research in the Chiu lab contribute to treating influenza?

We’re developing assays to rapidly diagnose influenza or any “flu-like” illness using the nanopore sequencer. Right now, the most commonly used test for influenza only tells you whether you are infected or not.

It’s our hope that we can implement a single test that can diagnose influenza, as well as everything else, including coronavirus, rhinovirus, bacterial infection, or a non-infectious asthma exacerbation. Eventually the test might also be able to subtype the influenza through whole-genome sequencing and compare the sequence to what was targeted by the vaccine, and that could lead to better vaccine development.