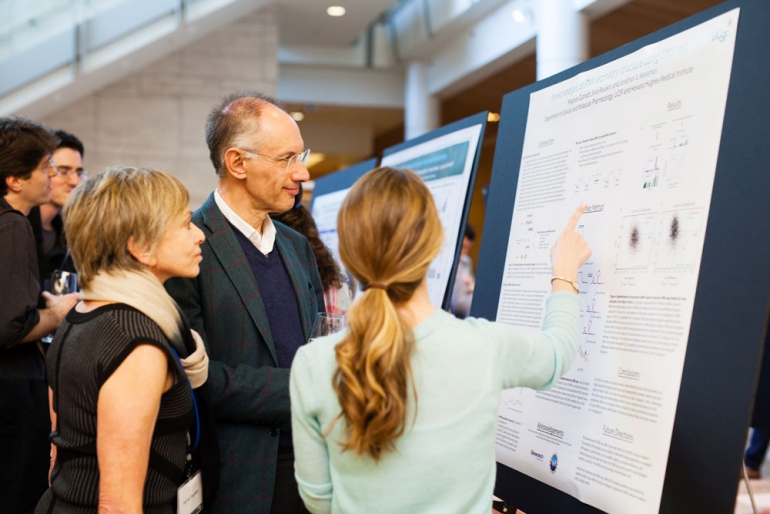 Sir Michael Moritz and Harriet Heyman, whose landmark gift established the program, were in attendance, as well as recent major contributor and longtime UCSF friend, Brook Byers, along with many other contributors.

Join the hundreds who've already donated to UCSF's education in basic science, and your gift will be matched by Sir Michael Moritz and Harriet Heyman.

The Discovery Fellows Program, established in 2013 with a $30 million gift from Moritz, chairman of Sequoia Capital in Menlo Park, and Heyman, a journalist, supports graduate education in the basic sciences. Their gift, which was matched with philanthropic contributions and UCSF institutional funds, created the largest endowed PhD program in UC history.

The program will support PhD students for generations to come through private philanthropy.

UCSF Chancellor Sam Hawgood, MBBS, kicked off the April 8 event by thanking Moritz and Heyman, and proudly acknowledging the success of the program, which has amassed 900 donors in the 18 months of its existence. He also acknowledged new leadership gifts from Byers and his wife, Shawn, and their family, as well as Bill and Ute Bowes.

“The two new gifts add to the corpus of the program, which is steadily growing,” said Hawgood. “These commitments will be tremendously helpful in extending the reach of this valuable program.”

The volume of donations, at 900, is just 100 shy of the Moritz-Heyman Challenge, which kicks in a $1 million participation bonus after a second group of 500 new donors is achieved. An additional $5 million in matching funds have been made available to donors who contribute over $10,000 to Discovery Fellows. The first tranche was met a year before its deadline during the first phase of the Moritz-Heyman Challenge in 2013. 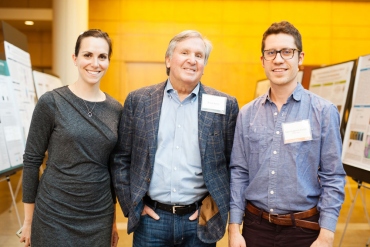 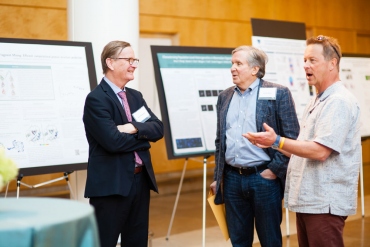 Moritz made remarks after the fifth-year presentations, acknowledging the fellows’ hard work of “journeying into areas that have seemed dim and opaque for generations.”

He also thanked them for the daunting work of making it understandable to the lay audience. “Thank you for using SUVs and spaghetti as analogies,” said Moritz. “Even I can understand those allusions.”

The fellows also serve as ambassadors of science, visiting students from middle school all the way through college, to talk about the value and opportunities of careers in science and the importance of philanthropy. “The work they are doing in their labs is important to discovery,” remarked Elizabeth Watkins, PhD, dean of the Graduate Division. “Just as important is the work they do to get younger generations excited about science.”

UCSF alumni have been crucial to the success of the Discovery Fellows Program. “The more alumni and friends who band together to support basic science, the better off we all are going to be,” Moritz told the crowd. “Because this is all about the third word of the program name: fellowship.”