UC San Francisco’s Louis J. Ptáček, M.D., a pioneer in the field of neurogenetics, is the 2015 recipient of the American Society for Clinical Investigation’s prestigious Stanley J. Korsmeyer Award. Ptáček is being honored for his research leading to the development of the field of ion channel defects, commonly known as channelopathies.

“I’m very humbled to have joined the list of amazing people who have received this award before me, including our own Shaun Coughlin, MD, PhD,” said Ptáček, a professor in the School of Medicine and a Howard Hughes Medical Institute investigator. “It’s a wonderful testament to many outstanding people – mentors, students, postdocs, and colleagues – with whom I have had, and continue to have, the good fortune to work with.” 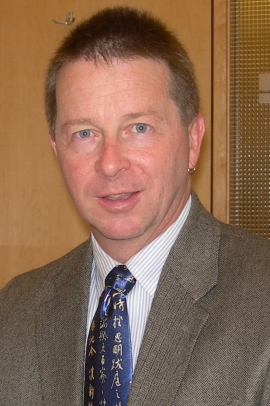 Early in his career, Ptáček began studying patients with rare Mendelian muscle disorders (periodic paralysis) and proposed these as a model of more common episodic disorders. In 1990, he began systematically characterizing genes causing familial forms of periodic paralysis. This series of landmark discoveries identified mutant ion channel genes and laid the groundwork for the field of channelopathies.

He proposed that all the work in channelopathies of skeletal muscle would be model for episodic disorders of heart and brain. Subsequently, his group and others have identified homologous genes that (when mutated) cause cardiac arrhythmias, epilepsy, and migraine. He has gone from describing new syndromes to cloning causative genes, to biological study in vitro and in vivo (animal models).

“Louis’ work, which typically begins with a recognition of rare families having unusual neurological symptoms, has not only led to the discovery of the causes of these rare disorders, but also major insights into the causes of more common disorders, such as epilepsy, and fundamental biological mechanisms, such as the molecular basis of sleep,” said Dan Lowenstein, MD, UCSF’s executive vice chancellor and provost. “There is no better example of the multitude of benefits that can come from astute clinical observations combined with creative and meticulous laboratory science. And if that was not enough, his kindness and humility epitomize why we have such a collaborative and supportive approach to our work here at UCSF.”

Ptáček will receive an unrestricted honorarium of $20,000 from the ASCI and will give the Korsmeyer Lecture on April 24 at the upcoming ASCI/AAP Joint Meeting.

Ptáček was elected to the ASCI in 2000, to the Institute of Medicine in 2007, to the Association of American Physicians in 2009, and to the National Academy of Sciences in 2012. The Stanley J. Korsmeyer Award is named after its eponymous inspiration, who was the first recipient of what was then called the ASCI Award. The Award, created in 1998, recognizes ASCI members who have made outstanding contributions as physician-scientists and as mentors to future investigators.

To learn more about Ptáček’s award, visit the ASCI website.