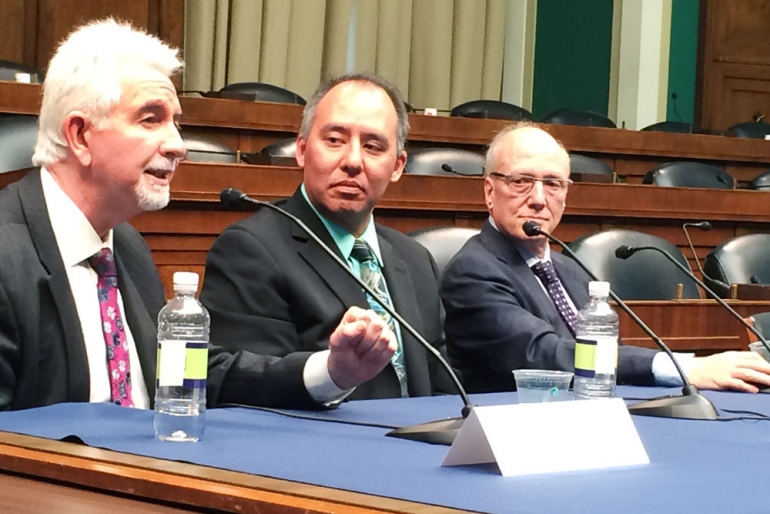 The NIH’s research grants to the Department of Neurology at the UCSF School of Medicine have resulted in tremendous strides in understanding how neurodegenerative diseases, like Alzheimer’s, Parkinson’s and frontotemporal dementias develop, according to Miller, director of the UCSF Memory and Aging Center. With that understanding is the potential for treating and preventing those diseases, he added.

“The work you do here is unbelievably important to our mission,” Miller said during the Jan. 29 congressional briefing, attended by about three dozen people who work for members of Congress. The staff were invited by the University of California to learn about the latest on brain research.

All three physicians emphasized the need for more public money to be invested in brain disease research.

“While other diseases are declining, like heart disease, cancer and stroke, Alzheimer’s is not. We think its going to double in prevalence,” Miller told congressional staff. “The NIH is spending about $500 million a year on Alzheimer’s research. Our mantra is, this year, spend $1 billion.”

A Growing Risk of Brain Disease

Alzheimer’s is one of the most costly diseases in the U.S. – $109 billion to $240 billion a year in medical and caregiver costs, according to Rand Corp. It is also the sixth leading cause of death. About 5 million people currently live with Alzheimer’s and 500,000 of them live in California.

Miller went on to describe how NIH funding had helped scientists understand which proteins caused different types of dementias, and how those proteins aggregate and destroy brain cells. With NIH money, scientists developed molecular imaging technology that now enable researchers to see proteins accumulating in the brain before symptoms develop, offering an opportunity to potentially prevent dementia from developing.

“I am proud to say, that with NIH funding, we are starting to treat pre-symptomatic” dementia, Miller said. “Those imaging costs are huge – $3,000 to $5,000 per patient– so there are very few places in the U.S. that can do that.”

“I was really struck by how helpful our legislators are,” Miller said. “We reach out to them, and they reach back out to us.”

Miller provided the briefing to staff as Congress begins considering the budget for 2016, which begins on October 1, 2015. The NIH’s annual budget was about $30 billion in 2015. President Barack Obama proposed increasing the NIH budget to $31.3 billion in 2016.