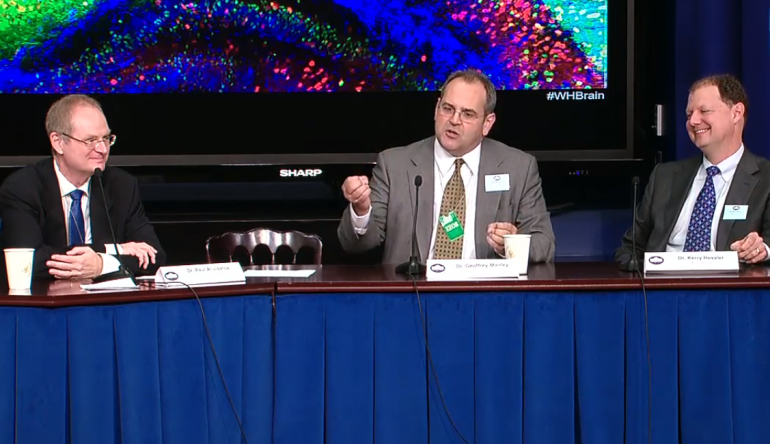 An unprecedented, public-private partnership funded by the Department of Defense (DoD) is being launched to drive the development of better-run clinical trials and may lead to the first successful treatments for traumatic brain injury, a condition affecting not only athletes and members of the military, but also millions among the general public, ranging from youngsters to elders.

Under the partnership, officially launched Oct. 1 with a $17 million, five-year award from the DoD, the research team, representing many universities, the Food and Drug Administration (FDA), companies and philanthropies, will examine data from thousands of patients in order to identify effective measures of brain injury and recovery, using biomarkers from blood, new imaging equipment and software, and other tools. 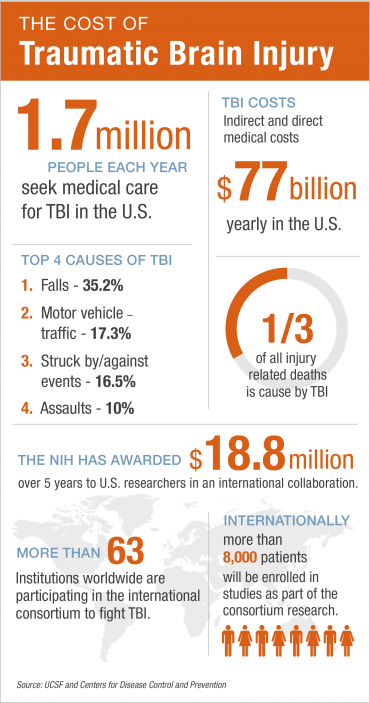 Each year more than 2.5 million people in the U.S. seek medical care for traumatic brain injuries that arise when blows to the body or nearby explosions cause the brain to collide with the inside of the skull. According to the U.S. Centers for Disease Control and Prevention an estimated 2 percent of the U.S. population now lives with TBI-caused disabilities, at an annual cost of about $77 billion. No treatment for acute TBI and concussion has proved to be effective.

“TBI is really a multifaceted condition, not a single event,” said UC San Francisco neurosurgeon Geoffrey T. Manley, MD, PhD, principal investigator for the new award and chief of neurosurgery at San Francisco General Hospital and Trauma Center (SFGH), a UCSF partner hospital. “TBI lags 40 to 50 years behind heart disease and cancer in terms of progress and understanding of the actual disease process and its potential aftermath. More than 30 clinical trials of potential TBI treatments have failed, and not a single drug has been approved.”

The new research initiative, called the TBI Endpoints Development (TED) Award, brings together leading academic clinician-scientists with innovative industry leaders in biotechnology and imaging technology, with patient advocacy organizations, and with philanthropies. The research collaborators will be collecting a broad range of long-term data from existing studies and databases, and integrating these into a dataset that can be interrogated for TBI associations and causes in a way that has never before been possible.

TED is specifically designed to overcome the difficulty in demonstrating the effectiveness of TBI drugs and medical devices by actively involving the FDA in clinical-trial design from the outset.

Although awareness of TBI has focused on athletes and warriors, the condition is widely prevalent across all populations, due to falls and motor-vehicle and other accidents.

“We know that the problem is far more extensive than reported,” Manley said. “We have evidence that even those patients who arrive at emergency rooms with signs and symptoms that suggest they’ve sustained a brain injury often are released with no indication of a possible TBI entered into their medical records, and with no recommendation for follow-up care.”

Col. Dallas Hack, MD, director of the U.S. Army’s Combat Casualty Care Research Program, conceived the new research initiative. “It had been a source of growing frustration to me that we couldn’t get anything through the system,” Hack said. “If you can’t win the game, you have to change the rules.”

The research collaborators will work directly with the FDA to come up with better methods for selecting patients for clinical trials, and better ways to measure patient outcomes that may lead to the identification of effective TBI treatments. 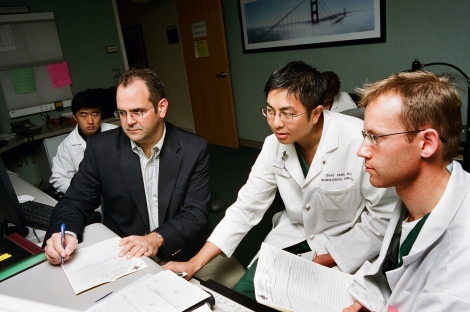 UCSF's Geoffrey Manley (left), chief of neurosurgery at San Francisco General Hospital and Trauma Center (SFGH), is the principal investigator for a new $17 million Department of Defense Award aimed at improving clinical trials for traumatic brain injury. In 2011, SFGH became the first hospital in the country to be certified for a Traumatic Brain Injury Program. Photo by Susan Merrell

The aim is for the FDA, through the agency’s Critical Path Initiative, to approve new tools for drug and medical-device development for use in clinical trials. “We believe that by bringing the FDA to the table we can accelerate research,” Manley said.

A major issue in TBI clinical trials has been problematic selection of appropriate participants. Researchers have chosen patients based on blunt symptoms-classification systems.

There has been a lack of consensus about how to define TBI. According to Hack, there are more than 42 different, published definitions of “concussion.” Without a consensus, the Glasgow Coma Score has been the fallback used in many current studies designed to investigate new biomarkers of brain injury that can be detected in blood or on MRI scans or used in the clinic. This gauge relies on a set of basic physiologic and cognitive responses, and it predates the invention of CT imaging, the current foundation for modern patient evaluation.

The new TED grant fosters collaboration between existing DoD, National Institutes of Health, and foundation-funded research networks; industry co-sponsors such as General Electric; and patient advocacy groups, such as One Mind, to try to develop procedures, outcomes measures, and standards for interpreting clinical data.

"This is an exciting time, with unprecedented promise in finding new ways to diagnose and treat not only TBI, but the full spectrum of neurological injuries and diseases – from ALS, epilepsy and autism to Alzheimer’s and dementia to cancerous tumors of the brain,” said Robert Wells, Executive Director for Strategy for GE Healthymagination.

"The discoveries derived from the TED initiative will bring medical technologies that are more effective, more affordable and more accessible to people everywhere. GE is proud to be partnering with the TED research team,” Wells said.

TED also will leverage the previously established International Traumatic Brain Injury (InTBIR) Initiative, a recently formed, global TBI research and data-sharing consortium that includes the European Commission, the Canadian Institutes of Health Research, the NIH and DoD. The U.S. contingent is funded through an earlier $18.8 million NIH award, called TRACK-TBI. Through TRACK-TBI, Manley, with UCSF colleagues including radiologists Pratik Mukherjee, MD, PhD; Esther Yuh, MD, PhD; and Michael Weiner, MD, PhD — and with a team of eminent clinicians and biostatisticians at more than 20 institutions throughout the country — is building a multi-dimensional database that integrates clinical, imaging, proteomic, genomic, and outcome biomarkers, collected starting within 24 hours of injury and continuing for a year.

“Geoff Manley has put together a dream team, and if anybody can make a difference on this, I think it’s this team,” Hack said. “Since we announced the TED program, I’ve gotten calls from pharma companies asking how we’re doing on this effort. This could be a way to get those companies back into the game.”