Thousands joined in Saturday’s revelry, starting with the 5K Hard Hat Walk along the waterfront and through the Mission Bay neighborhood and ending with the Lights On Festival in the public plaza outside the medical center complex. The event culminated in a multi-color light show illuminating the windows of the three hospitals opening on Feb. 1, 2015: UCSF Benioff Children’s Hospital San Francisco, UCSF Bakar Cancer Hospital and UCSF Betty Irene Moore Women’s Hospital.

Donors and attendees of the celebration raised more than $525,000 for the new hospitals, exceeding the fundraising goal of $500,000.

Kicking off the Hard Hat Walk, UCSF Medical Center CEO Mark Laret paid tribute to the construction crew, staff and fundraisers. He urged the crowds to remind themselves that with “every step you take, think about a child whose life is going to be saved in that hospital and a mom who’s going to have an easier birth because of innovations here.”

There was plenty of levity to offset the serious moments. 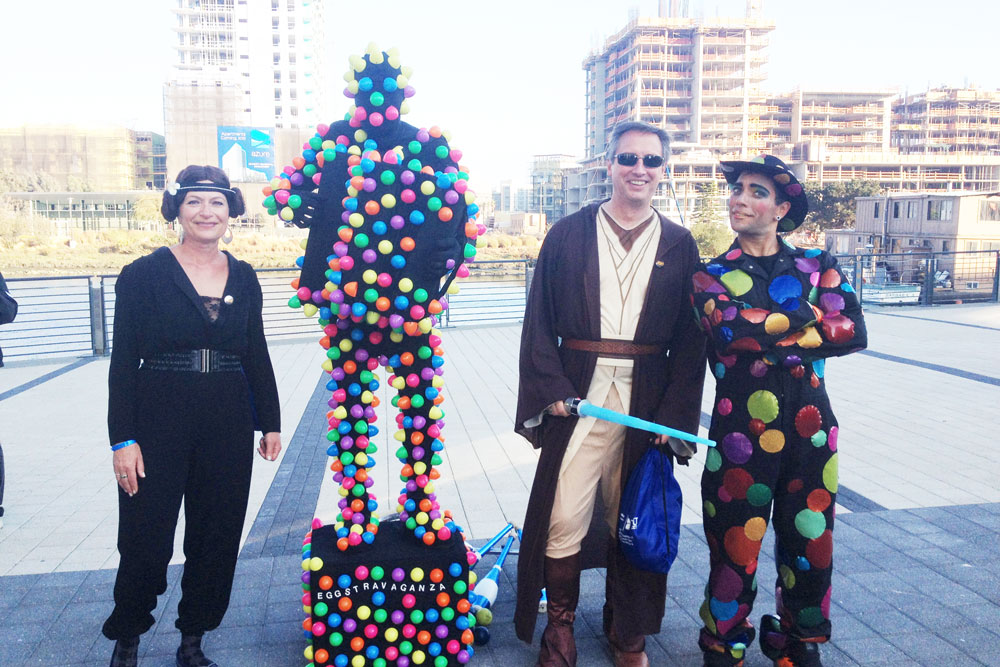 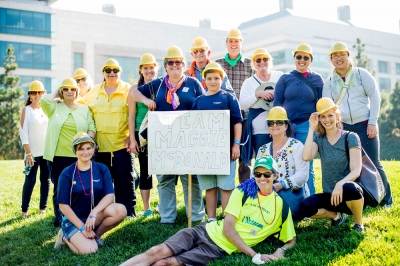 Sally McDonald (center, behind the sign) organized the team, Remembering Maggie McDonald, in tribute to her daughter who passed away earlier this year at age 19. Photo by Noah Berger

A number of teams assembled for the walk dressed in fun costumes. UCSF Chief Information Officer Joe Bengfort nixed the sweats in favor of Luke Skywalker duds to lead his team, the Jedi Masters, which raised close to $12,000. The UCSF Cancer Crusaders donned superhero masks and capes; the Children’s Emergency Department team all wore rainbow tutus; and Remembering Maggie McDonald – one of the top patient fundraising teams – sported yellow hard hats in tribute to 19-year-old Maggie, a longtime patient of UCSF Benioff Children’s Hospital San Francisco who passed away earlier this year.

At the festival, families enjoyed pastries, tacos and other tasty treats from top local restaurants, while children got their faces painted, participated in wall art, played bungee run and danced to Vocal Rush, a teen a cappella group from the Oakland School for the Arts. Other participants decompressed with chair messages or a snuggle with a friendly possum from the San Francisco Zoo’s Zoomobile.

The midafternoon sun had segued into an early evening chill by the time celebrated singer and Bay Area native Michael Franti took the stage. But the audience warmed up dancing to his hits, “I’m Alive” and “Say Hey.” Marissa Holmes, 10, whose sister was a cancer patient at UCSF Benioff Children’s Hospital San Francisco, asked to be turned into a tiger at the face-painting booth, then enjoyed the performances at the Lights On Festival. Photo by Noah Berger

At his invitation, a group of patients joined him on stage. The new hospitals were very personal to him, Franti explained, because his 15-year-old son had been a long-term patient at UCSF Benioff Children’s Hospital San Francisco. The audience nodded in unison, knowing the hospitals will play a key role in their health and that of their loved ones for generations to come.

David Chiu, president of the San Francisco Board of Supervisors, said it best when he addressed the crowd: “This is a moment in time so special for San Francisco.”

Did you miss the light show? Catch it here:

A view of the light show and festivities in the public plaza.

A group of children stand in awe of the multi-colored lights projecting onto the Medical Center.

The audience gets excited as the light show begins on new medical center complex.

Singer Michael Franti invited patients to join him on stage during his performance. He explained to the crowd that the event had special significance to him because his own 15-year-old son had been a long-term patient at UCSF.

Gjelina Abrenico, 3, helps paint a mural during the Lights On Festival.

Kenna Stuck, who received a life-saving bone marrow transplant as part of her cancer treatment at UCSF, returned with her parents, Doug and Kelly, to support the new hospitals. Read more about Kenna's story here.

An acrobat hovers over the crowd during the Lights On Festival outside the new medical center complex.

Brian McEnnerney, who led the fundraising team Brian's VIPs to thank UCSF Medical Center for the care he received last summer, poses with jewelry designer and philanthropist Jennifer Montana at the Lights On Festival.

Superhero Teddy Reibel, 5, whose older sister Rosalie was treated for brain cancer at UCSF, soared past AT&T Park during the Hard Hat Walk.

The relaxed 5K walk followed the waterfront, around AT&T Park and back through the Mission Bay neighborhood.

The UCSF Cancer Crusaders was one of many teams that dressed in fun costumes for the event.

Thousands gather at the start line of the Hard Hat Walk, getting ready for a 5K walk through the Mission Bay neighborhood.

Nilani, a facility dog at UCSF Benioff Children's Hospital San Francisco, leads her own team at the Hard Hat Walk.

Saleh Adi, MD, director of the UCSF Madison Clinic for Pediatric Diabetes, takes on the ALS Ice Bucket Challenge while supporting the new hospitals. He gave the honor of dousing him to the two top fundraisers on the Madison Clinic team, nurses Jeanne Buchanan (left) and Lauren Horton (right).

Jugglers and other circus performers entertained attendees of all ages during the Hard Hat Walk.