Imagine your tooth falling out at a class reunion, not being able to smile or even carry on a coherent conversation.

That’s exactly what happened to a UC San Francisco School of Medicine alumnus two years ago during UCSF’s Alumni Weekend festivities. In the midst of his minor dental emergency, he managed to locate Andrew Kaufteil, JD, executive director of UCSF Alumni Relations, who oversees Alumni Weekend at UCSF.

“The School of Dentistry alumni are gathered upstairs and I’m sure I can find someone who can help you,” Kaufteil remembers saying, as he escorted the alumnus to the dentistry event.

Kaufteil handed him off to a School of Dentistry alumni board member, who assured both men, “Don’t worry. I’ve got this covered.”

After thanking Kaufteil, the alumnus said with a toothy grin, “I really like this joint reunion!”

Although UCSF is celebrating its 150th anniversary this year, Alumni Weekend, with all four professional schools (Dentistry, Medicine, Nursing, and Pharmacy) and the Graduate Division, is only in its third year.

Previously, each school’s alumni event was a freestanding program with its own traditions, held at various times throughout the year. And the Graduate Division, representing 17 PhD programs, 10 master’s programs, as well as degrees in physical therapy, never had an annual event. 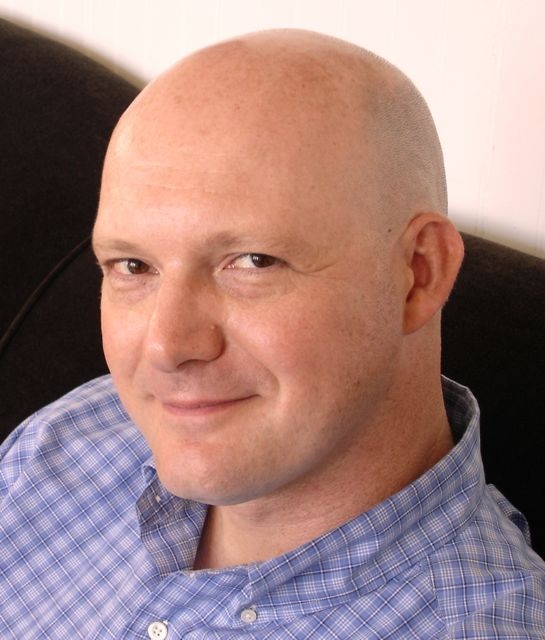 Leading a campuswide concept called “OneUCSF,” former Chancellor and resident alumna Susan Desmond-Hellmann, MD, MPH, championed a more collaborative environment while reducing redundancies. Alumni Weekend embodies the first visible manifestation of this new approach, representing a culture shift not only for alumni relations, but also for the campus as a whole.

“There’s tremendous power in breaking down the silos,” said Mark Boone, JD, assistant vice chancellor of School Development & Alumni Relations at UCSF. “This approach creates real synergies, leveraging the power of these different alumni groups as they come together to create something totally new and original. All of our alumni have dedicated their lives to advancing health sciences, so they’re united by their shared values and purpose.”

Maintaining existing traditions – some of which go back more than a century – was an important aspect of all four schools and the Graduate Division getting on board the concept of a campus-wide alumni weekend.

“We assured the schools we would honor, leverage, and build off of their traditions. And we’ve done that,” Kaufteil said. “What we did was additive, complementing what already existed, while finding new and creative ways to bring everyone together.”

Kaufteil has experience bringing groups together. At The George Washington University in Washington, D.C., Kaufteil transformed a small, decentralized alumni program into a robust, singular program.

“I saw that bringing everything together really helped them,” he said. “Eight years later, this approach has become a tradition that they carry forward to this day.”

When UCSF decided to unify its alumni events, Kaufteil – based on his success at The George Washington University – was the right person for the job. 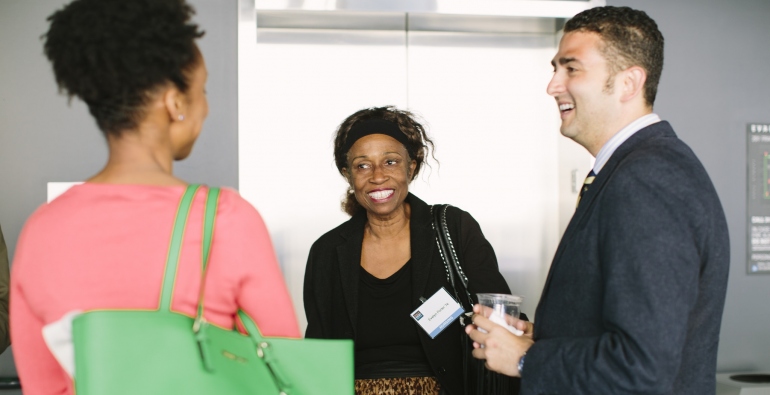 “Andrew is a visionary leader with infectious energy, and he brought everyone together to make alumni weekend happen,” Boone said. “When we recruited him to UCSF he came into an environment that was ready for him, and we gave him the ball and he ran with it. He was able to work very effectively with the deans of each of the schools and the alumni associations to get their buy in, and the results have been extraordinary.”

The most difficult task was finding a date – or even a time of the year – that everyone could agree. Eventually all four schools and the Graduate Division decided a spring event made the most sense.

The second biggest hurdle was finding the venue. Organizers considered the Moscone Center, City Hall, all of the major hotels, and various UCSF campuses. Multiple locations in San Francisco were considered, and the Palace Hotel in Downtown San Francisco ended up being the ideal venue for Alumni Weekend.

“The first ever medical school reunion happened at the Palace,” Kaufteil said. “So it’s perfect because it’s a historic and nostalgic location with wonderful facilities. It really is the perfect venue.”

The theme for the first all-UCSF Alumni Weekend in 2012 was “serious fun.”

“We noticed that there was a lot of focus on serious stuff such as continuing education but there was an appetite for more fun social activities,” Kaufteil said. “I think we assumed that since we’re a graduate-only institution and we’re extraordinary in the sciences, that our alumni aren’t interested in having fun but that’s not exactly true. Because they do serious work, sometimes our alumni want to relax and have a good time and get to know each other.”

That approach worked and alumni were thrilled some levity was incorporated into the weekend.

“We had so many comments from alumni who said, ‘We’re so happy to see the word ‘fun.’ This is actually fun!’” Kaufteil said. “We built off the incredibly serious stuff that we do, and created purely recreational, social activities that got their minds engaged in artistic ways.”

Organizers decided to hold an evening event with a local cultural institution or group, partnering with the San Francisco Symphony the first two years. The goal was to have alumni truly engage with the city. This year, UCSF partnered with SFJAZZ Center to have a mixer with live music.

The strategy has resonated with the greater UCSF community. This year, 2,054 attended Alumni Weekend on May 29-31, making it the most successful alumni event in UCSF history. And key events saw a huge jump in attendance.

Alumni from all four schools and the Graduate Division flew in from Australia, Canada, Great Britain, Japan and 22 U.S. states.

“In the past, some of our schools had a half-day reunion. Now we all have two-and-a-half days,” Kaufteil said. “We do a lot more with the additional time. We’re able to draw more people from far away because people are really making a weekend out of it.”

The Discovery Talks was one of the biggest attractions of the weekend. Five esteemed faculty members gave “TED”-like talks on a specific aspect of their research, attracting more than 300 colleagues.

► Watch each of the Alumni Weekend 2014 Discovery Talks

Esteban Burchard, MD, MPH, a UCSF postdoc alumnus, talked about the interplay between genes and the environment to determine the causes of asthma health disparities in children and adolescents.

Barbara Drew, RN, PhD, professor of physiological nursing and founder of the ECG Monitoring Research Lab in the UCSF School of Nursing, presented her research on expanding information obtained from ECG recordings to improve clinical decision-making and patient outcomes in clinical settings.

Shari Dworkin, PhD, MS, professor and vice chair of the UCSF Department of Social and Behavioral Sciences, discussed the importance of structural interventions, particularly those at the intersection of economic empowerment programs and HIV/AIDS prevention.

Shingo Kajimura, PhD, assistant professor in the UCSF Diabetes Center and Department of Cell and Tissue Biology, spoke about developing methods of converting white fat into brown fat – or “good” fat – using genetic and chemical techniques. His lab hopes to develop a novel approach to dealing with obesity and type-2 diabetes.

Tracy McKnight, PhD, a UCSF postdoc alumna, presented her research in the metabolic mechanisms associated with the malignant progression of brain tumors. She correlates in vivo magnetic resonance imaging (MRI) and spectroscopic (MRS) features of human brain tumors with ex vivo measures of metabolism and other molecular alterations associated with tumor aggressiveness.

Elizabeth Watkins, PhD, Dean of the UCSF Graduate Division and Vice Chancellor of Student Academic Affairs, moderated the talks, which attracted 325 people. In the inaugural Discovery Talks a year ago, only 25 attended.

“In the world of health care and science, there's a greater emphasis on interprofessional collaboration so there are more alums from various schools and programs who want to meet and work with each other,” Kaufteil said. “And alumni weekend is a reflection of that.”

Campus leadership hopes that events such as alumni weekend can become a catalyst to generate greater support for UCSF’s educational enterprise.

“Our clinical and research excellence are world-renowned, but the educational mission isn’t quite as visible to many of our top donors,” Boone said. “It can be a formidable challenge to raise money for student scholarships and fellowships.” 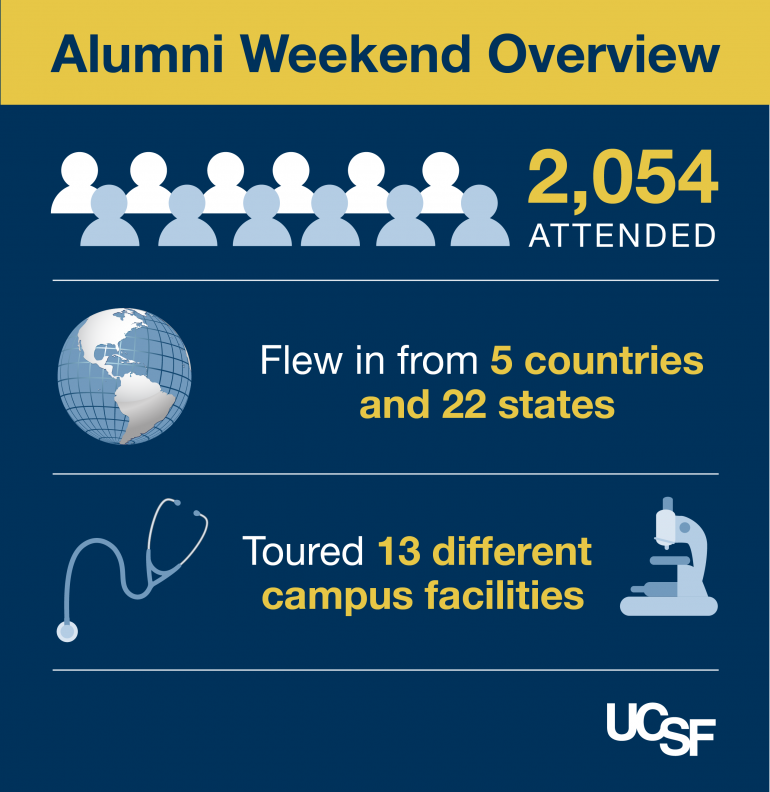 To this end, UCSF launched the public phase of its first educational fundraising initiative with a target goal of $100 million in April 2012.

“We’re almost at $100 million now, a year ahead of schedule,” Boone said. “Not all of the money has come from alumni but they are essential contributors.”

He credits the all-UCSF Alumni Weekend for helping to increase donations. Overall alumni contributions to the campus have nearly tripled since the inaugural Alumni Weekend in 2012.

“Many of our students participate in alumni weekend to get a glimpse into their future, but more importantly, to thank our alumni for their support,” Boone said. “Alumni can see the difference their contributions are making right in front of their eyes.”

Alumni Weekend is now a distant memory, but organizers have many reasons to smile. Besides a record turnout, the event won a “Circle of Excellence” award in the “Alumni Relations Program” category from the Council for Advancement and Support of Education (CASE). UCSF tied for a silver medal, competing against a field of 16 international entries. And many alumni have sent messages of how much they enjoyed their weekend.

Kaufteil, as he looks ahead to next year’s event, understands a project of this magnitude can only succeed with the help and cooperation of many groups and individuals.

“It’s all about relationships,” he said. “We are a small staff. We are just conveners of many different partners – close to 40 collaborators such as Student Life, Campus Life Services Arts & Events, Office of Diversity and Outreach, University Relations and many others – and that will bring the University to the next level and truly be this ‘OneUCSF’ entity that we collectively strive for.”

Edward Way, PharmD (Pharmacy '38), holds the distinction of being the oldest alumnus at Alumni Weekend 2014 at 97 years of age. He was only one of three Chinese students in his PharmD program in the late 1930s. Now more than half — or 52.8 percent — in the UCSF School of Pharmacy are of Asian descent. Photo by Victor Wong

Alumni don disposable surgical scrubs and gloves to enter the Robotic Pharmacy facility during a tour of Mission Bay at Alumni Weekend 2014. It is one of the most comprehensive automated hospital pharmacies in the nation. Photo by Noah Berger

Tracy McKnight, PhD, a UCSF postdoc alumna, presents her research about the metabolic mechanisms associated with the malignant progression of brain tumors during Alumni Weekend's Discovery Talks. She is one of five distinguished speakers to deliver "TED"-like talks on a specific aspect of their research. Photo by Carmen Holt

Lynn Carasali, DDS (Dentistry '64), Donald Gillies, MD (Medicine '59), and 2,052 other alumni get acquainted at the All-Alumni Kickoff Reception. It is the largest gathering of UCSF alumni ever assembled. Photo by Carmen Holt

Lavay Smith and Her Hot Skillet Lickers get people moving at the All-Alumni Kickoff Reception, held at the Palace Hotel in Downtown San Francisco. Photo by Carmen Holt

Executive Vice Chancellor and Provost Jeff Bluestone, PhD, and his wife Leah Rosenkrantz enjoy themselves at the All-Alumni Cultural Outing Reception, one of the first events of Alumni Weekend 2014. Photo by Carmen Holt