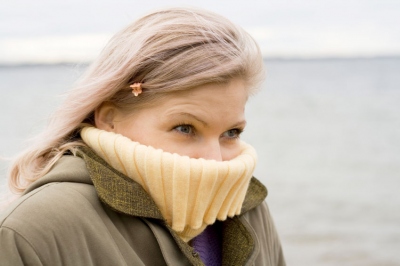 The calorie-burning triggered by cold temperatures can be achieved biochemically – without the chill – raising hopes for a weight-loss strategy focused on the immune system rather than the brain, according to a new study by UC San Francisco researchers.

Working with mice, Chawla’s team discovered that the signaling molecules, called interleukin 4 and interleukin 13, activate cells known as macrophages, which in turn drive the fat conversion. In one experiment, the researchers gave interleukin 4 to fat mice, which increased beige fat mass, leading to weight loss. 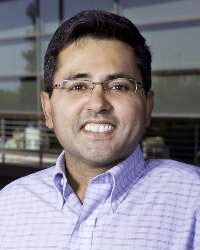 The finding builds on previous work by Chawla’s team, which reported in 2011 in Nature that cold activates part of the immune system, and specifically activates interleukin 4 in fat. In the new study, Chawla’s team determined that both interleukin 4 and interleukin 13 recruit macrophages to fat and that the production of molecules called catecholamines by the macrophages causes the browning of white fat.

When the researchers inhibited interleukin 4 signaling in white fat, they found that the mice made less beige fat, burned less energy and could no longer maintain normal body temperature in the cold.

The study results are likely to further fuel the quest to identify new ways to pharmaceutically tame obesity by targeting how much energy we burn, not just how many calories we ingest, according to Chawla.

“If you could increase energy expenditure by even a few percent, over a period of a year or two year you would make a big difference,” he said.

The new discovery is surprising, Chawla said, because it makes it clear that this control mechanism for fat burning bypasses components of the autonomic nervous system that govern many physiological adaptations. “Nutrient and energy metabolism has largely been thought to be under the control of the brain and endocrine system,” he said.

In comparison to the nervous system, the immune pathway might be more easily manipulated to increase energy expenditure, Chawla said. In fact, another study published simultaneously in Cell by researchers from the Dana-Farber Cancer Institute and Harvard Medical School reports the identification of a hormone, produced in fat tissue after cold exposure, that activates interleukin 4 and interleukin 13 to drive fat burning. 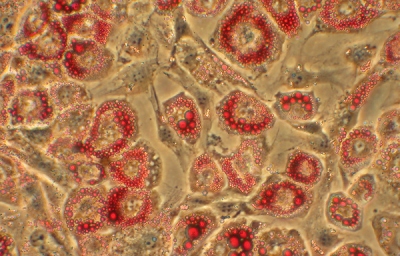 Fat cells shown under a microscope. Image by Shingo Kajimura/UCSF

Humans and other mammals shiver to keep warm, but cold also triggers the growth of fat cells that burn fuel, instead of the fat cells that store it. Keep humans indoors at 61 degrees to 63 degrees Fahrenheit without allowing them to bundle up, and they lose weight, research shows. That’s because they adapt by generating more fat-burning cells to help them keep warm.

In contrast to the power-converting mechanisms in white fat cells, the gears in the power plants within fat-burning fat cells spin inefficiently. This causes them to burn more energy and generate heat. The trigger for this accelerated fat burning is the activation within the cell’s power plants – called mitochondria – of a protein called uncoupling protein 1 (UCP1). Cells with UCP1 are capable of heat generation and fat burning, and are known as brown fat or beige fat, depending on the tissue from which they originate. They have more mitochondria than white cells and therefore have a darker tinge.

In comparison to other mammals, ranging in size from mice to bears, until a few years ago it was widely thought that humans had little brown or beige fat and little potential to generate it.

Although Chawla and many other researchers now believe that the potential to exploit brown fat for weight loss is significant, the amount of individual variation when it comes to brown fat reserves and the potential to generate more brown fat is unclear. “We don’t know what the dynamic range is,” Chawla said. “It appears that women have more, that we have less as we age, and that obesity is associated with having less brown fat.”

Additional UCSF study authors include postdoctoral fellows Yifu Qiu, PhD, Khoa Nguyen, PhD, and Justin Odegaard, MD, PhD; and Richard Locksley, MD, a professor of medicine and Howard Hughes Medical Institute investigator. Richard Palmiter, PhD, professor of biochemistry and Howard Hughes Medical Institute investigator at the University of Washington, also is a co-author of the study. The research was funded by the National Institutes of Health and the American Heart Association.