Changes in intestinal bacteria may help explain why successfully treated HIV patients nonetheless experience life-shortening chronic diseases earlier than those who are uninfected, according to a new study led by UC San Francisco.

These changes in gut bacteria may perpetuate inflammation initially triggered by the body’s immune response to HIV, researchers reported.

Their study was published online July 10 in the journal Science Translational Medicine. 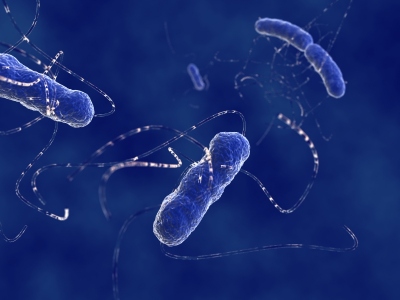 The new findings support recent research pointing to such persistent inflammation is a possible cause of the early onset of common chronic diseases found in HIV patients, who now can live for decades without immune system destruction and death due to infection thanks to lifelong treatment with antiretroviral drugs. Likewise, in the general population, ongoing inflammation has been linked in some studies to chronic conditions, such as heart disease, dementia and obesity.

Studies have shown that inflammation is induced by HIV in both treated and untreated patients, and is associated with – and possibly causes – disease in both, according to Joseph M. McCune, MD, PhD, chief of the Division of Experimental Medicine at UCSF and a senior author of the study. McCune has been investigating the causes of chronic inflammation in HIV-infected patients and has treated patients with HIV for more than three decades.

“We want to understand what allows the virus to persist in patients who have HIV disease, even after treatment,” he said. “In this study, we see that bacteria in the gut may play a role.”

A Closer Look at the Gut Microbiome

The study was initiated by Ivan Vujkovic-Cvijin, a graduate student working in McCune’s lab in collaboration with Susan Lynch, PhD, an associate professor in the Division of Gastroenterology at UCSF and an expert on the human microbiome, the collection of microbes the live in and on the human body.

We found that HIV-infected people have a very different gut microbiome than people who are uninfected.

Researchers estimate that humans have about 10 times as many bacterial cells as human cells, and earlier studies have demonstrated that some of the microbes found within the intestines are able to drive immune responses, according to Lynch.

“We thought the gut microbiome might be different in HIV-infected individuals, and that the high degree of immune activation in the patients might be associated with and possibly due to the presence of specific members of the bacterial community,” Lynch said.

Vujkovic-Cvijin identified bacterial species in biopsied patient samples by tracking a gene that is distinct among different bacterial species. Working with co-first author, Richard Dunham, PhD, a UCSF postdoctoral fellow, he also tracked markers of inflammation in the blood.

The researchers compared seven untreated HIV patients, including six with active infection and one long-term patient who never developed AIDS; 18 HIV patients in whom ongoing drug treatment had reduced HIV in the blood to undetectable levels; and nine uninfected individuals matched for other health risks. The patients are part of a group being monitored through ongoing research led by UCSF's Steven Deeks, MD, and Jeffrey Martin, MD, MPH, at San Francisco General Hospital and Trauma Center.

“We found that HIV-infected people have a very different gut microbiome than people who are uninfected,” Vujkovic-Cvijin said. “In particular, infected people harbor more bacteria that can cause harmful inflammation, like Pseudomonas, Salmonella, E. coli, and Staphylococcus.”

Restoring the Gut – And Eliminating HIV

The degree to which normal bacterial communities in the colon were disrupted corresponded to the levels of an inflammatory molecule, IL-6, in the blood, and also to the production of an enzyme called indoleamine 2,3-dioxygenase. The enzyme can impair the gut’s ability to function as a barrier, thereby allowing bacteria and molecules produced by bacteria to enter the body to fuel even more inflammation.

Species of bacteria that can mimic the action of this enzyme also were more abundant in HIV-infected participants, Vujkovic-Cvijin found.

The researchers do not believe that there is a single bacterial species responsible for disrupting the integrity of the gut nor do they propose a specific probiotic bacterial treatment to restore a healthy gut. Nonetheless, Lynch said, manipulating microbial populations is a promising idea.

“It appears that changes in the microbiome perpetuate a vicious cycle that drives inflammation in HIV-infected patients,” she said. “We are considering a restoration ecology approach to restore appropriate microbial colonization patterns and healthy functioning of the gut microbiome.”

McCune believes that inflammation may also play a role in maintaining the persistence of HIV, even in those with no circulating virus in the bloodstream.

“Our dream is to be able to make the virus go away, allowing HIV-infected people to lead longer lives without the need for life-long therapy,” he said. “Perhaps restoring the microbiome to normal will be one strategy to make that happen.”

The research was funded by the National Institutes of Health, the National Science Foundation, UCSF, and the Harvey V. Berneking Living Trust.