Ronald Vale, PhD, of the University of California, San Francisco (UCSF), was one of three scientists awarded the 2012 Albert Lasker Basic Medical Research Award. The researchers’ work, beginning more than three decades ago, has helped illuminate several critical aspects of life — how the heart beats and how cells transport material around internally.

The other two scientists were James Spudich, PhD, of Stanford University, and Michael Sheetz, PhD, of Columbia University.

Each scientist led efforts beginning in the early 1980s that uncovered the basis of muscle contractions and heartbeats; that identified tiny molecular motors that chug cargo to and fro within cells; and that described the microscopic roadways along which these motors travel.

Talking about one of these molecular motor proteins, almost 30 years after he first co-discovered it, Vale is still filled with wonder.

“It’s a protein machine that is about one-millionth of an inch across — something vastly smaller than any machine that man has ever built,” Vale said, describing kinesin proteins, a large family of molecular motors that are fundamental to life. 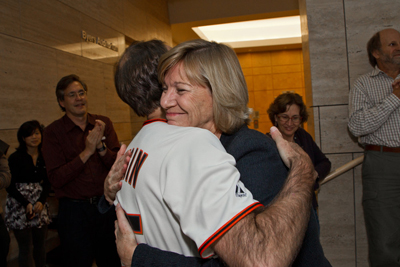 A Howard Hughes Medical Institute investigator, Vale is professor and vice chair of the Department of Cellular and Molecular Pharmacology at UCSF. He is one of nine faculty members associated with UCSF who have won Lasker awards for basic or clinical medical research. Four previous Lasker winners from UCSF subsequently won the Nobel Prize.

“Dr. Vale’s work exemplifies the value of basic research in laying the groundwork for our understanding of diseases and the development of therapies to treat them. He represents the best of UCSF science and its mission of translating basic findings into clinical treatments. We are extremely proud of him,” said UCSF Chancellor Susan Desmond-Hellmann, MD, MPH.

Vale, Spudich and Sheetz will split the $250,000 prize, to be awarded later this month at a ceremony in New York City. In a statement, the Albert and Mary Lasker Foundation cited the three scientists for “discoveries concerning cytoskeletal motor proteins, machines that move cargos within cells, contract muscles and enable cell movements.”

“All of us are thrilled that Dr. Vale has received this recognition," said UCSF School of Medicine Dean Sam Hawgood, MBBS. "His work clearly demonstrates that uncovering the fundamental pathways of life through basic research is essential to our understanding of the human body and our search for new discoveries in the treatment of disease.”

The Squid, the Cell and the Molecular Motor

Beginning in the 1970s and 1980s, Vale, Spudich and Sheetz established ways to study the fine details of molecular motors, working with these proteins in the test tube and with organisms like the squid, which has a single giant nerve fiber that controls its water propulsion.

Spudich began these studies in the early 1970s, when he was a professor at UCSF, and continued this work after moving to Stanford University. In 1982, Sheetz went to work in Spudich’s laboratory and soon began to collaborate with Vale, who was a graduate student at Stanford in the laboratory of Eric Shooter.

As a neurobiology major, Vale was interested in the problem of nerve regeneration, and one of the thorny, unanswered questions was how material was transported inside of nerve cells along the length of a nerve fiber.

Nerve cells can be incredibly long, with some stretching from the spinal column to the tips of the fingers or toes. How the body manages to transport hormones, protein building blocks, lipids and other biological molecules from one end of such a long cell to the other was a complete mystery in the early 1980s — though scientists reasoned that there had to be a motility mechanism for doing so.

The means of transportation within that microscopic environment turned out to have striking similarities to modern transportation systems in the macroscopic world. While humans construct roadways made of concrete, asphalt and other surfaces, Vale and his colleagues discovered that cells lay down tracks of proteins, called microtubules, as the basis of their microscopic roadways.

And just as humans produce cars and trucks to conduct people and goods along roads, cells make their own motors that zip to and fro along their microscopic roadways. Cars convert chemical energy from gasoline into mechanical energy that fires pistons and drives a car forward. Molecular motors convert a chemical energy known as ATP into physical motion along microscopic tracks. However, biological motors are much more efficient in converting chemical energy into motion than car motors. 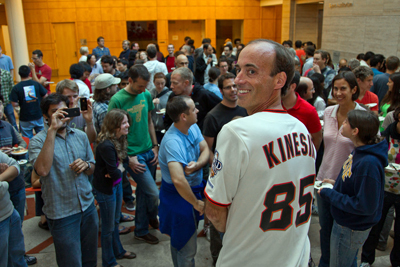 UCSF's Ronald Vale, who won a Lasker Award with colleagues James Spudich, PhD, of Stanford University, and Michael Sheetz, PhD, of Columbia University, shows his Giants shirt with the name of the molecular motor they discovered and named “kinesin” after a Greek word that means motion.

In 1985, Vale, Sheetz and Tom Reese at the Marine Biological Laboratory in Woods Hole, Mass., discovered a new molecular motor, which they named “kinesin” after a Greek word that means motion.

“It turned out to be a completely new protein that no one knew about before,” Vale recalled.

Over time, many researchers around the world discovered that the kinesins are a large family of proteins found in great abundance in cellular forms of life. Even a simple organism like baker’s yeast has a half-dozen different forms of this protein. Humans have 45 distinct types of kinesins — each adapted to carry out a specialized function, like cell division or transporting cargos within nerve cells.

From 1996 to 1999, Vale, along with Roger Cooke and Robert Fletterick from UCSF and Ron Milligan from The Scripps Research Institute in La Jolla, Calif., worked out the intricate molecular picture that showed how kinesin converts chemical energy into forward motion by using the energy of ATP to cause changes to the shape of the protein. The shape changes enable kinesin to take steps along a microtubule in a hand-over-hand motion, similar to how one might methodically climb along a rope.

Because many disease states are linked to genetic defects in kinesins and other motor proteins, a number of companies are developing drugs that target molecular motors for heart failure, skeletal muscle dysfunction and cancer, including several that are in clinical trials today.

One company that is pursuing such therapeutics is the Bay Area firm Cytokinetics, Inc., which Vale co-founded in 1997.

A resident of Marin County, Vale received his BS degree in biology and chemistry from the University of California, Santa Barbara and his PhD in neuroscience from Stanford University. He conducted postdoctoral studies at the Marine Biological Laboratory and has been a faculty member at UCSF since 1986. Vale also founded a science education website called iBioSeminars.org, which has its home base at UCSF.