Carlos Gonzalez stands out from an athletic group gathered on a grassy field at the UCSF Mission Bay campus. The gregarious 32-year-old sports a stylish fauxhawk and walks with a confident yet understated swagger. He’s training to become a mixed martial arts fighter.

The group looks like a slice of the San Francisco Bay Area: a multiracial gathering — white, black, Latino, Asian, biracial — of men and women in their early 20s to late 40s.

As diverse as they are, they came together at the Orthopaedic Institute one recent spring afternoon for a common purpose: to participate in UCSF’s Amputee Comprehensive Training program, the first and only multidisciplinary athletic training program for civilian amputees in the country. Athletes go through a full physical evaluation, gait analysis, artificial limb socket evaluation, strength training exercises, and lateral sports drills such as basketball, rock climbing, cycling, swimming, boxing and martial arts.

These athletes are bonded by a singular experience: all have lost a leg and are learning to push physical boundaries with the help of state-of-the-art artificial limbs. With the support of experts at UCSF, they are testing their mettle, going further than they had ever imagined possible.

Taking Athletes to the Next Level

“We work with amputees who want to do more than just learn to walk again with their artificial legs,” said Alex Hetherington, a prosthetist with the Orthotics & Prosthetics Centers at UCSF, where experts customize artificial limbs and train patients who have athletic goals.

“We take them from the initial fit to learning the means of running, biking, or whatever activities or goals that our patients may have. Whether it’s providing that custom prosthesis, or the physical training involved, we have athletic trainers and access to unlimited resources to take these athletes to the next level.”

The day-long training program, held on May 4, 2012, involved a host of evaluations and boot camp-style conditioning exercises designed to ensure that the athletes’ artificial legs would do what they need them to do, as well as training and conditioning. A motion-capturing computer program analyzed their gaits and trainers took them through a gauntlet of conditioning programs, including sprint exercises, spinning (cycling) classes, rock climbing, kickboxing classes, and military-style physical training exercises designed to strengthen their bodies.

The program builds on the Orthotic & Prosthetic Center’s daily work of evaluating, designing, custom fitting and manufacturing all types of orthoses (braces) and prostheses (artificial limbs). The team includes doctors, a physical therapist, a trainer, and experts in orthotics and prosthetics who help develop an individualized patient care and rehabilitation plan. 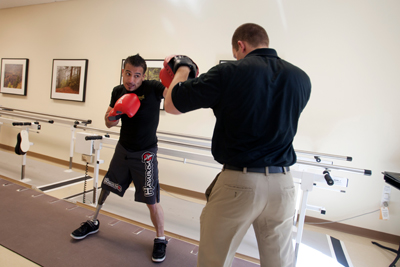 Tim Baldwin, a certified athletic trainer, works with Carlos Gonzalez, left, on his boxing techniques during a recent athletic training program for amputees at UCSF.

“There’s definitely a gray area after patients undergo an amputation, undergo physical therapy and are sort of set off into the world without any additional training or resources,” said Matthew Garibaldi, CPO, director of the Orthotics & Prosthetics Centers at UCSF. “We are able to bridge that gap and provide something that we really haven’t been able to do in a clinical setting before.”

Wrong Place at the Wrong Time

Gonzalez lost his leg seven years ago while walking home in Visitacion Valley, a neighborhood in the southeast section of San Francisco, after a long day at work. He found himself in the crossfire of gang violence.

“One of the guys pulled out a big rifle, and started shooting,” Gonzalez said. “I heard a couple of gunshots go off and I remembered people behind me yelling, ‘They’re shooting! They’re shooting!’ As I tried to get away, I recalled getting shot in the belly by one of those rounds.”

That single round tore through Gonzalez’s common iliac artery, which supplies blood to a person’s legs. It did so much damage that it put Gonzalez in a coma for two months. Doctors at San Francisco General Hospital and Trauma Center were able to save his life, but they were unable to stave off the infection in his right leg, which quickly spread.

“If I didn’t get rid of my leg, they said I probably would have died,” Gonzalez said. “They started off below the knee and they worked their way to above the knee, because the infection was so bad.”

Shooting for the Paralympics

The adjustment from having two legs to only one has been a long physical and psychological journey for Gonzalez and the rest of the group.

“I went through so much pain,” said Ranjit Steiner, a 21-year-old University of Oregon student who initially had knee replacement surgery after a large, malignant tumor ravaged his right leg. “I couldn’t walk anymore and I was on pain killers. I was on crutches walking around campus and it wasn’t doing it for me anymore. I wanted to be active and go out with my friends, and play football and go run. I wanted to be who I was before the knee replacement surgery.”

Two years ago, Steiner and his doctors agreed to amputate his leg.

“It was a relief to finally be done with all that pain and move on to a new chapter,” he said.

Steiner has set his sights on the 2012 Paralympics at London this summer. A competitor by nature and a gifted athlete, he played football and ran track in high school. He hopes to qualify for the 200m dash and the long jump.

For Kent Brown, the services offered at UCSF are light years ahead of what was available when he lost his leg almost 40 years ago due to bone cancer at the age of 14. His first artificial leg was a wooden peg leg.

“It didn’t have any mechanics to it. Basically you swung it out and walked on it the best you could without falling,” he said. “It was strapped on and very uncomfortable and very heavy.” 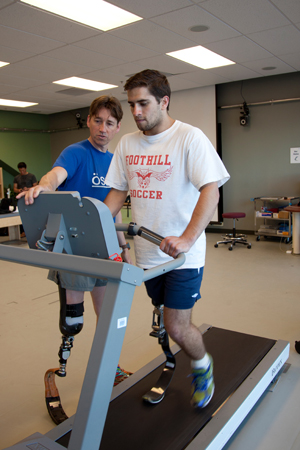 Trainer Jeff Turner looks on as Ranjit Steiner runs on treadmill during a program for amputee athletes at UCSF Mission Bay on May 4.

As the technology evolved, Brown eventually got a hydraulics-based leg, which worked well but was a lot heavier compared to a human leg. Eventually each artificial leg got lighter and lighter, making it easier for him to walk.

Brown hopes to be as swift as Geoff Turner some day. Turner, who lost his right leg in a motorcycle accident 23 years ago, is an avid runner. He learned about running blades through an organization called the Challenged Athletes Foundation and Össur, a company that manufactures running blades.

“That made a huge difference,” Turner said. “Before that, I’d get up and run a mile or two with my prosthetic leg. Sometimes it would break and I would have difficulty getting to work. It wasn’t until I had a dedicated running blade that my running really took off.”

Creating a Community of Amputees

“It’s key to have the support of your prosthetist,” Turner said. “The idea that they have a trainer here at UCSF is brilliant and it’s going to make all the difference in the world for people.”

“UCSF’s awesome. I came here before my amputation, and fell in love with it after the amputation,” Steiner said. “I met Matt and Alex and the whole team, and they got me moving. I told Matt, ‘I want to run and I want to move,’ and he said, ‘OK. That’s what we’re going to do.’ Now we’re here. And it’s not just me. It’s a bunch of other athletes like me.”

“I have never seen anything like this before,” said Robert Kim, who lost his leg eight years ago after acquiring staph infection. “I was working with a group in Sacramento and it would take weeks for me to get in. I can call UCSF and I can get in the same week. I show up and they’ll take care of me every time.”

“What UCSF is doing, and what we’re a part of, is creating a community of amputees who have a common thread. We’re using athletics and sports as our common thread,” said Alan Shanken, who lost his right leg at the age of three due to a birth defect. “I think UCSF is doing a terrific thing that can really grow and we also have a group of passionate amputees who want to help each other. And this community is really important and I think this community can be a really strong foundation.”

“They’re fantastic,” added Mary Roberts, who lost her leg at the age of 17 when doctors found a tumor in her right foot. “They’re really great. They’re very supportive and I love that they’re doing new things and trying to build a community and provide opportunities for amputees who are athletes.”

Learning and Giving Back

The next Amputee Comprehensive Training event is scheduled for the fall, building on the recent spring event. Organizers hope to make the next one a national event.

For Gonzalez, this event and the community of athletes it gathered are about learning and giving back. He says martial arts has helped pull him out of depression and given him a renewed purpose in life.

“So as a team, I ask, the guys at UCSF give, and what I give back to them is me being here and thriving and helping people out, so it’s rewarding for all of us,” he said. “It has nothing to do with, ‘you do this for me and I’ll do this for you.’ This is more like, this is our purpose in life and we enjoy what we do.

“It’s taken me a long time to get here.” 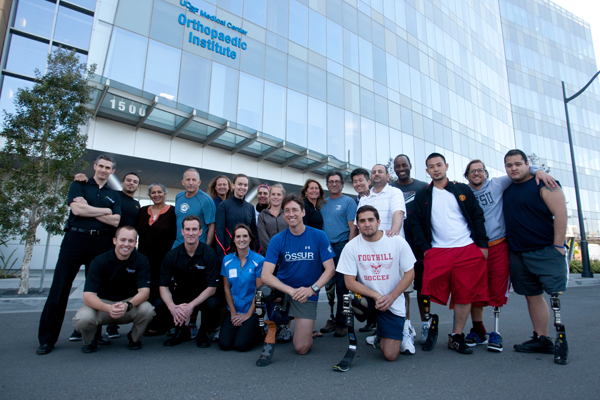 Amputee athletes and a team of trainers and experts in orthotics and prosthetics gather for a group shot after comprehensive training at the Orthopaedic Institute at UCSF Mission Bay on May 4.