He’s rocked out in front of as many as 600,000 fans at concert venues all over the country. As a Grateful Dead drummer, Mickey Hart and his band mates have headlined more than 2,300 concerts while developing a cult following among devotees who proudly call themselves “Deadheads.”

After being a professional drummer for more than 45 years, Hart has changed his focus to smaller venues, this time performing for an audience of patients at UCSF Benioff Children’s Hospital, where children and their families find compassionate care at the forefront of scientific discovery.

On a sunny afternoon in June, Hart, his daughter Raya Sunshine, and a team of half a dozen hip musicians laid out colorful, psychedelic drums of various shapes and sizes for a carefully orchestrated drum circle. The goal was to use music as part of the healing process for children who are hospitalized with serious illnesses.

“The Grateful Dead made people smile, and we had rhythm, melody and harmony,” said Hart, now 68 years old. “It was medicine to many people, just like music is medicine to these kids.”

Hart appeared for “Music Day” at UCSF Benioff Children’s Hospital, part of a UCSF program using music to help patients reduce stress, anxiety and depression. Playing music for patients, and offering them the instruments and skills to play themselves, provides children with a sense of empowerment, distracts them from discomforts of treatments, and gives them a sense of normalcy in an otherwise unfamiliar environment. Music Day was spearheaded by the Child Life Department, which recognizes the integral role hospital child life programs play in the healing process.

“Music is fundamental to who we are as people,” said Michael Towne, manager of Child Life Services at UCSF Benioff Children’s Hospital. “So music education and music therapy provide an amazing outlet for children here. It helps them deal with their hospitalization. It helps them cope; it helps them understand; and it helps them have joy while they’re here.”

Patients ranging in ages from four to 18 gradually filled the sixth floor patio of the hospital, the site for the festive drum circle. Many walked in unassisted with their attentive nurses just a few steps behind. Others walked hesitantly, tightly holding onto their parents’ hands while dragging a clunky but necessary IV pole. 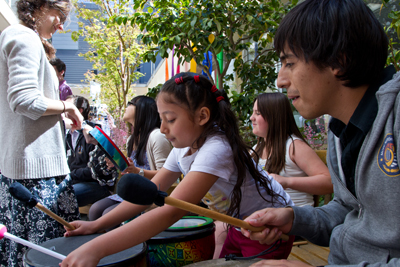 As each child entered the patio, Hart greeted them with sincere enthusiasm. “Come on in!” he said. “Let’s make some music!”

It didn’t take long for Hart and his team to start the drum circle. Each soulful beat resonated deeply, gradually going from tribal to festive. He captivated the children’s imagination, and slowly they joined in. At first they patted the drums, the way one would pat a big dog, but they gradually — with Mickey’s supportive guidance — beat the drums with zest and rhythm, momentarily forgetting their illness and overcoming their shyness at the same time.

“This certainly stimulates the brain for sure,” Hart said. “Music takes you to a whole other world, a spirit world, and a world of opportunities, whether it be math, science, or technology. It’s a great inspirer. It’s a superhighway to the soul.”

Rick Munoz’s four-year-old son Jamison — who has leukemia — took part, enjoying hitting the drums, too young to recognize the man who is giving him pointers. 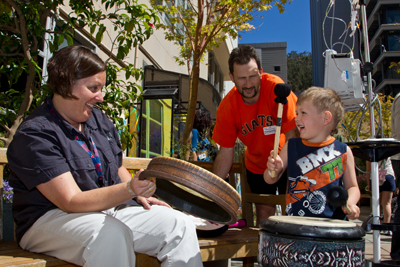 “It was pretty cool just to have Jamison get some exposure to a renowned drummer like Mickey,” said Munoz, who owns a karaoke business in the East Bay. “It was interesting just to see my son actually attempting to find a rhythm with him. When I get upstairs, I need to download a bunch of Grateful Dead music and show Jamison this is who you were playing with.”

As the sound from the drum circle got louder and louder, the children’s smiles got bigger and bigger. It didn’t take long before every child there was either beating a drum or dancing to the beat created by the impromptu band. Hart circled the venue and, like a dedicated coach, encouraged the young musicians.

“I’m actually playing with them as opposed to an audience who is just listening,” Hart said. “We’re actually playing together so this is a rhythmic experience that I’m having and they’re having, and I’m noticing how much rhythm they actually do have. I mean there were a few kids today who were exactly on the groove, exactly on the beat.”

For Hart, this is a way of continuing his parents’ legacy. Both were musicians who encouraged him from an early age to express himself through drumming on pots and pans. Hart’s daughter Raya Sunshine, 19, is a music studies major who credits her dad for her professional passion.

Kiff Gallagher, left, CEO and founder of the Center for Music National Service, and Sarah Fagan, 19, a patient at UCSF Benioff Children's Hospital, jam with legendary drummer Mickey Hart in the hospital's courtyard.

“Music is everything in my life. I grew up on the road drumming with my dad,” she said. “And to see him now playing with these amazing kids, it’s great. He’s a really great support system for young people. He loves them and they obviously love him so much.”

The team at UCSF Benioff Children’s Hospital is grateful to Hart for making time to help heal the children through music.

“Mickey Hart is not only an amazing musician, he has an amazing spirit about him,” Towne said. “He’s fun, he’s creative and he brought his passion for music and his passion for drumming. He not only created an amazing drum circle here, he also took drums to children’s bedsides and brought joy to them through music on a one-on-one setting.”

Hart says he had as much fun as the kids did. He believes in the healing power of music, so he’s happy to share his passion with those who need it the most.

“I had a great time and the smiles were worth it,” Hart said, grinning from ear to ear. “Those were million-dollar smiles.” 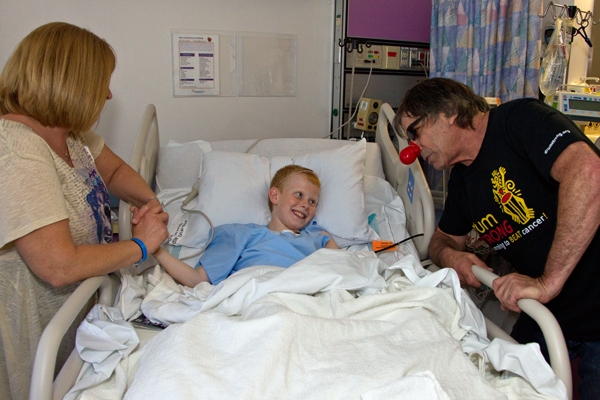