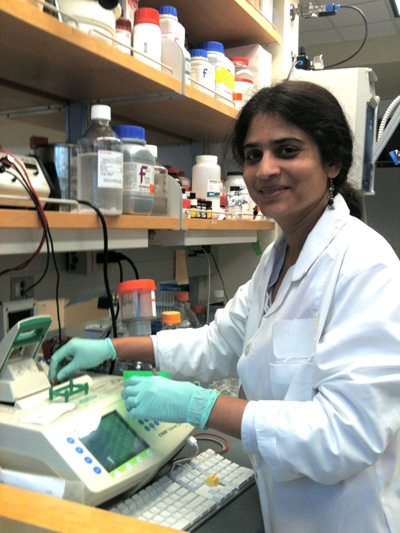 Aditi Bhargava, PhD, associate professor at UCSF’s School of Medicine, is using a technique known as RNA interference (RNAi) to develop a gene therapy system that sends specific commands to certain neurons, or nerve cells, telling them to turn off pain, or stop inflammation.

“The current treatments for pain dull everything,” Bhargava said. “You have a little fire in the kitchen, but your only solution is a fire hose that floods the entire house. You put out the fire, but you’re affecting the whole house in the process — a huge negative side effect.”

Likening her method to a Trojan horse, Bhargava’s novel therapeutic approach essentially hides the pain-silencing commands, carried by distinct proteins that affect cellular function, inside other proteins which bind only to the troublemaker cells. Once attached, they release their hidden power.

“We want to target the small or medium neurons that sense pain, while leaving other neurons unaffected,” she said. “We’re hoping that while you reduce pain, for example, you’ll still be able to chew or not drool.”

The data from her proof-of-concept animal studies look promising, Bhargava said. “I believe that this project has tremendous translational potential to turn what we learn into concrete benefits for patients.”

Targeted pain and inflammation relief could also be used to treat illnesses, such as Inflammatory Bowel Disease (IBD), an autoimmune condition. This approach has potential to not only minimize unwanted side effects, but save costs, as it sends very small amounts of drug therapies to the targeted cells.

Targeted delivery of drug would reduce the dose required to treat, reduce cost, and most importantly, reduce unwanted side effects.

However, Bhargava’s work is in the early stages, and she’s now facing the critical next steps of moving from animal models to studies with humans, a phase she describes as complex and challenging.

To get help tailored to her individual needs, Bhargava applied for a T1 Translational Catalyst Award, granted by UCSF’s Clinical and Translational Science Institute (CTSI). The award is designed to help drive promising, early-stage research through the lengthy and complex process of translating promising ideas into patient benefit.

The CTSI T1 Catalyst Award works with a tiered model that provides increasing benefit at each of three phases, beginning with feedback and analysis of all proposals. In the second phase, a selected number of awardees are chosen to receive expert consultation from a customized panel of technical, clinical, and business experts.

During this consultation period, applicants are also eligible to apply for a pilot award of up to $15,000 to be used toward a critical experiment or study that may strengthen the proposal. In the final phase, funds of up to $100,000 are awarded to one or more applicants to develop proposals further.

“Many recipients point to individualized consultation with industry, legal, and regulatory experts as the most valuable element of the T1 Catalyst award process,” said Ruben Rathnasingham, PhD, a senior program manager with CTSI’s Early Translational Research program, which administers the award. “Applicants have found that expert advice that steers their research toward greater commercial and clinical utility often opens new doors to funding opportunities that were previously unavailable.”

“For researchers who have a well-developed idea with promising data, yet struggle to breach the gap between early research and clinical practice, the T1 Catalyst Award offers an indispensable opportunity,” he added.

In the case of Bhargava, “her work was very innovative and we immediately saw its potential clinical relevance,” Rathnasingham said. “Connecting her with an industry veteran has helped her tap into the full capabilities of her innovation, as well as provide a clear path forward.”

Bhargava was matched with Alex Bajamonde, then a biostatistician at Genentech, who suggested she focus on developing the method for wider applications, including delivering therapies.

“The advice was illuminating,” Bhargava said. “Working with someone who has done this is much better than reinventing the wheel. We obviously needed help scaling it up.”

Based on consultant feedback, and supported by a $15,000 Pilot Award from the T1 Catalyst Program, she revised her proposal to test her method with other localized diseases, such as inflammatory bowel disease, one of her areas of expertise. She used it to send a proven bowel disease antibody that blocks inflammation directly to the affected part of the intestine. “We found a dramatic reduction in inflammation, and we think the side effects will be much less,” she said.

While her investigation is on stronger footing than before the consultation, Bhargava cautions that far more research is needed. With the support of new data, she’s now working to get a patent on her innovation.

In another indication that she’s on a promising path, Bhargava, and her collaborator, Peter Ohara, PhD, UCSF professor of anatomy, recently secured an additional $100,000 in funding from a private donor and the Painless Research Foundation.

CTSI is a member of the National Institutes of Health-funded Clinical and Translational Science Awards network. Under the banner of "Accelerating Research to Improve Health," it provides a wide range of services for researchers, and promotes online collaboration and networking tools such as UCSF Profiles.