The news team at UCSF’s University Relations and Strategic Communications has won two awards for its communications from the Council for Advancement and Support of Education (CASE), District VII.

CASE awarded University Relations a gold award for “UCSF: Committed to the City,” an interactive map featuring multimedia stories about the University’s many public outreach projects in San Francisco, and a silver in science writing for a group of five web stories.

All winners can be viewed here. [PDF]

The community mapping project — initiated by Barbara J. French, vice chancellor of University Relations and Strategic Communications, ­and implemented by a group of staff and two interns led by Kevin Eisenmann — was singled out by the judges for special praise. “We received a record number of entries this year,” the judges wrote, “and your excellent achievement stood out among the best. We appreciate you sharing your fine work with us. 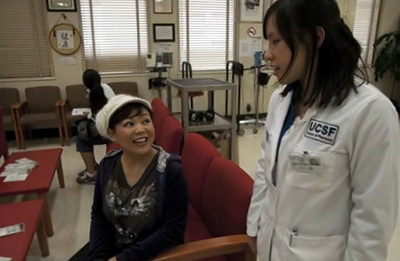 Lisa Lam, a pharmacy student at UCSF, checks in with Maggie Wong before her exam. See Students Vaccinate Against Hepatitis B in Chinatown.

“One of our objectives is to share best practices among our colleagues in an effort to help all improve their skills and increase their effectiveness. Your efforts will be recognized as an example for others to emulate. Thank you for producing the kind of work that brings respect to our profession.”

Committed to the City is an ongoing project that documents UCSF’s considerable community service projects in diverse neighborhoods in San Francisco. The regular feature is intended to showcase UCSF’s involvement in improving the health and education of the community and to create a broader awareness of its public service mission both on campus and among neighbors. Stories, told through video, audio and photo slideshows, range from UCSF’s work with San Francisco public school students and teachers to community health fairs, from medical outreach to underserved populations to providing health care to runners at the San Francisco marathon.

The science writing entry “Bench to Bedside” included five stories that collectively received recognition, illustrating the ways that scientific discoveries at UCSF aim to help patients and inform their care as well as offer insight about basic scientific research.