A UCSF study suggests patients with chronic pain may experience greater relief if their doctors add cannabinoids – the main ingredient in cannabis or medical marijuana – to an opiates-only treatment.

A UCSF study suggests patients with chronic pain may experience greater relief if their doctors add cannabinoids – the main ingredient in cannabis or medical marijuana – to an opiates-only treatment. The findings, from a small-scale study, also suggest that a combined therapy could result in reduced opiate dosages.

More than 76 million Americans suffer from chronic pain – more people than diabetes, heart disease and cancer combined, according to the National Centers for Health Statistics. 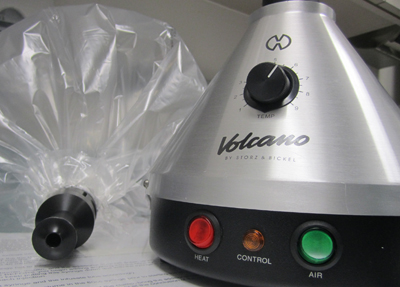 A vaporizer such as this one delivers the same amount of cannabis as if a patient smokes a marijuana cigarette.

“Pain is a big problem in America and chronic pain is a reason many people utilize the health care system,” said the paper’s lead author, Donald Abrams, MD, professor of clinical medicine at UCSF and chief of the Hematology-Oncology Division at San Francisco General Hospital and Trauma Center (SFGH). “And chronic pain is, unfortunately, one of the problems we’re least capable of managing effectively.”

In a paper published this month in Clinical Pharmacology & Therapeutics, researchers examined the interaction between cannabinoids and opiates in the first human study of its kind. They found the combination of the two components reduced pain more than using opiates alone, similar to results previously found in animal studies.

Researchers studied chronic pain patients who were being treated with long-acting morphine or long-acting oxycodone. Their treatment was supplemented with controlled amounts of cannabinoids, inhaled through a vaporizer. The original focus was on whether the opiates’ effectiveness increased, not on whether the cannabinoids helped reduce pain.

Abrams and his colleagues studied 21 chronic pain patients in the inpatient Clinical and Transitional Science Institute’s Clinical Research Center at SFGH: 10 on sustained-release morphine and 11 on oxycodone. After obtaining opiate levels from patients at the start of the study, researchers exposed them to vaporized cannabis for four consecutive days. On the fifth day, they looked again at the level of opiate in the bloodstream. Because the level of morphine was slightly lower in the patients, and the level of oxycodone was virtually unchanged, “one would expect they would have less relief of pain and what we found that was interesting was that instead of having less pain relief, patients had more pain relief,” Abrams said. “So that was a little surprising.”

“This preliminary study seems to imply that people may be able to get away perhaps taking lower doses of the opiates for longer periods of time if taken in conjunction with cannabis,” Abrams said.

Opiates are very strong powerful pain medicines that can be highly addictive. They also can be deadly since opiates sometimes suppress the respiratory system.

As a cancer doctor, Abrams was motivated to find safe and effective treatments for chronic pain. Patients in the cannabis-opiates study experienced no major side effects such as nausea, vomiting or loss of appetite. 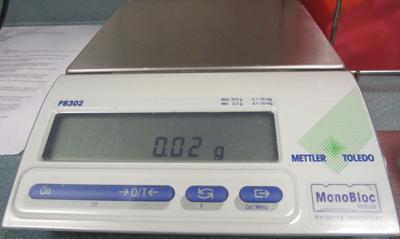 A scale is used to weigh cannabis before it is put in the vaporizer to ensure accurate dosage.

“What we need to do now is look at pain as the primary endpoint of a larger trial,” he said. “Particularly I would be interested in looking at the effect of different strains of cannabis.”

For instance, Delta 9 THC is the main psychoactive component of cannabis but cannabis contains about 70 other similar compounds with different effects. One of those is cannabidiol, or CBD. It appears to be very effective against pain and inflammation without creating the “high” created by THC.

“I think it would be interesting to do a larger study comparing high THC versus high CBD cannabis strains in association with opiates in patients with chronic pain and perhaps even having a placebo as a control,” Abrams said. “That would be the next step.”