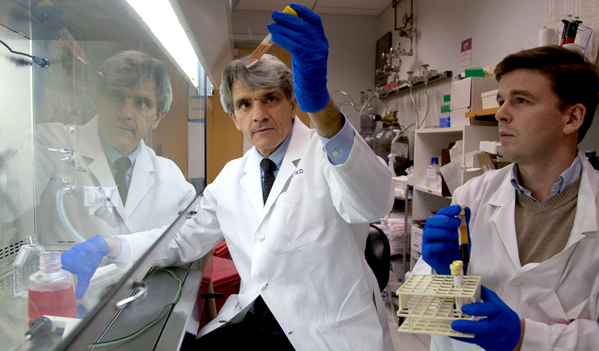 Stephen Hauser, MD, chair of the Department of Neurology, works with Pierre-Antoine Gourraud, PhD, in the lab at UCSF.

An experimental drug called Ocrelizumab has shown promise in a Phase 2 clinical trial involving 220 people with multiple sclerosis (MS), an often debilitating, chronic autoimmune disease that affects an increasing number of people in North America. It usually strikes young adults and is more common in women than in men.

The study, carried out by researchers at UCSF Medical Center, and involving hospitals in the United States, Canada, and Europe, is described this week in the British medical journal Lancet.

The study involved patients with relapsing-remitting MS, a form of the disease marked by the accumulation of lesions in the brain and spinal cord and periodic “attacks” of neurological impairment.

The 220 patients were randomly enrolled into four groups – two that received injections of the monoclonal antibody Ocrelizumab at two different doses, one that received the standard multiple sclerosis drug interferon-beta, and one “control” group that was given a placebo.

The doctors gauged the effectiveness of each treatment by performing monthly magnetic resonance imaging (MRI) brain scans of the patients and counting the number of visible marks that indicate inflamed lesions, a hallmark of the disease. They also compared the severity and frequency of neurological “attacks” that cause loss of vision, incoordination, weakness and numbness, among other symptoms.

The results of this trial showed that patients who received the drug generally fared well and showed fewer signs of the disease than patients who receive a placebo or the standard Interferon treatment. Overall, the trial found that Ocrelizumab led to a 89 percent reduction in the formation of brain lesions, and it also reduced the number of new multiple sclerosis attacks over 24 weeks. During this relatively short-term study, interferon performed no better than placebo on these outcomes.

“It really is a remarkable finding,” said Stephen Hauser, MD, the Robert A. Fishman Distinguished Professor and chair of the Department of Neurology at UCSF who was the senior author on the study. “This is extremely exciting, both in terms of the prospect of improved therapy for people with multiple sclerosis but also for the lessons that it teaches us about the fundamental cause of the disease.”

“The prospect of an extremely effective therapy for multiple sclerosis that can be safely administered at six month intervals could represent a major step forward, if the safety profile and benefits are sustained over longer periods of use,” he added.

Hauser said that the next step for the drug will be to see if the drug’s effect and positive safety profile will be sustained over time. These questions will be addressed in two parallel Phase 3 trials, now enrolling a larger number of patients who will receive the drug regimens for a longer period of time. This trial is now underway at several hundred sites around the world. Hauser serves as lead investigator for these trials, which are sponsored by Roche, the company that owns Ocrelizumab.

What the Trial Suggests About Multiple Sclerosis

Besides the obvious question of whether the drug would work, also under scrutiny in the clinical trial was whether a drug like Ocrelizumab would work in the first place. Its mechanism of action is fundamentally different than other existing therapies for multiple sclerosis. All multiple sclerosis drugs work by targeting a person’s immune system – only they target fundamentally different parts.

In multiple sclerosis, a person’s immune system attacks the myelin sheath that insulated nerve fibers in the brain and spinal cord. Most of these attacks have no associated symptoms, but damage to these sheaths can short circuit signals traveling along the nerve fibers. This disrupts the normal flow of communication from the brain and can cause a range of symptoms – including visual impairment, weakness, sensory disturbance, fatigue, cognitive difficulties, and loss of coordination.

For decades, work in the field has focused on targeting one component of the immune system – the T cells – which were always seen as the “smoking gun” of the disease because they attack nerve fibers in the brain, causing the lesions and ultimately the symptoms of multiple sclerosis. Ocrelizumab, in contrast, targets a molecule called CD20 found on the surface of B cells, a separate component of the immune system.

Although the mechanism is not exactly clear, said Hauser, the B cells seem to induce the T cells to attack. If T cells are pulling the trigger on nerve fibers in the brain, B cells seem to be the ones that are loading the gun. The Phase 2 trial showed, in essence, that if you block one, you may be able to stop the other.

Hauser said the recently concluded trial validated the idea that targeting the B cells could ultimately help people with multiple sclerosis – an idea that Hauser has championed for more than a decade after basic research in his laboratory in the 1990s suggested that these cells play a role in the disease.

“This is a great example of lessons learned at the bench bringing us to an experiment at the bedside that completely transformed our understanding of what we needed to do to develop more selective and more effective therapy for MS,” he said.

This work was funded by Roche.