A study by researchers at the University of Mississippi Medical Center (UMMC) and the University of California, San Francisco (UCSF) shows that rats given a popularly prescribed antidepressant during development exhibit brain abnormalities and behaviors characteristic of autism spectrum disorders. 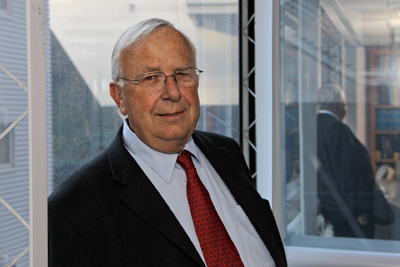 The findings suggest that taking a certain class of antidepressants known as selective serotonin reuptake inhibitors – SSRIs – during pregnancy might be one factor contributing to a dramatic rise in these developmental disorders in children.

“We saw behaviors in the treated rats and neurological problems that indicate their brains are not properly conducting and processing information,” said Rick C.S. Lin, PhD, professor of neurobiology and anatomical sciences at UMMC and principal investigator on the study.

“However, based on this study alone it, would be premature to conclude that a pregnant mother should stop taking SSRIs. A pregnant mother may do more harm to her baby through untreated depression than by taking prescribed SSRIs. This study is a starting point and a lot more research needs to be done.”

The study appears online Oct. 24, 2011 in the journal Proceedings of the National Academy of Sciences at www.pnas.org.

The researchers treated more than 200 rats with the SSRI citalopram during key stages of brain development. Rats are born at an earlier developmental stage than humans, equivalent to the end of the sixth month of fetal development in humans.

In contrast with control-group rats, the investigators found the treated populations were uninterested in play when young and displayed poor social behaviors as adults. The treated rats also showed abnormal responses to changes in their environment. For example, they froze at the sound of a novel tone and showed little interest in exploring new toys.

Those behaviors occurred more often – and sometimes exclusively – in the treated male rats than in treated females. Similarly, autism spectrum disorder, or ASD, is diagnosed more often in males.

Of numerous SSRIs available, the researchers chose citalopram because it is one of the most specific in targeting the serotonin system with little overlap on other neurotransmitters.

“What we see in this experiment is a strong impact on the auditory cortex. These animals are not maturing in the normal, progressive way, and those differences are substantial,” said Merzenich, a senior author on the paper. “The cortex is sluggish and represents sounds with low accuracy. The listening cortex is delayed in development and is impaired into adulthood.”

Delayed development of the representation of aural speech is a hallmark of ASD in children, Merzenich said. It contributes to these children’s struggles with language and reading.

Another brain abnormality common in ASD is a thinner corpus callosum, particularly in the forward third of the structure. Like a massive nerve-fiber bridge, the corpus callosum connects the brain’s two halves and transmits electrical signals between them. It also plays a key part in higher intellectual function, said Ian Paul, UMMC professor of psychiatry and human behavior.

“This nerve fiber tract was disrupted in the same way in these rats’ brains,” he said.

Many callosal axons in the treated rats had abnormal or missing myelin sheathing, a coating necessary for proper neuroconductivity.

“Without that myelin wrapping the signal slows or doesn’t get through at all. The abnormalities in these rats would suggest the left and right sides of their brains are not communicating properly,” said Paul, a senior co-author on the paper.

Lin said the researchers analyzed multiple aspects – behavior, pathology, brain morphology, neurochemistry and neurophysiology – to conduct a broad survey and get a sense of structural and functional abnormalities.

A $1.3 million EUREKA grant to Lin from the National Institute of Mental Health (NIMH) funded the study.

The study in rats follows an epidemiologic study in humans, published in July in the Archives of General Psychiatry. That investigation found that children of mothers who took SSRIs during the year prior to giving birth ran twice the normal risk of developing autism.

“While one must always be cautious extrapolating from medication effects in rats to medication effects in people, these new results suggest an opportunity to study the mechanisms by which antidepressants influence brain and behavioral development,” said Thomas R. Insel, MD, director of the NIMH. “These studies will help to balance the mental health needs of pregnant mothers with possible increased risk to their offspring.”

The incidence of pregnant women taking SSRIs has grown from about .5 percent in 1985 when the first one came on the market to nearly 10 percent today, Paul said.

Autism was initially described in 1943 and through the next decades the parameters expanded. In 1996, the rate of incidence was less than 1 in 1,000 births and by 2007 it reached about 1 in 200. The rates of incidence of ASD have roughly doubled every three-to-five years to 1 in 91 currently, he said.

“The diagnosis has widened with the awareness that it’s a spectrum disorder that encompasses a whole range of communication problems, but that doesn’t account for all the increase by any means,” Paul said.

Merzenich said a genetic component for autism risk is found in certain families, more strongly expressed in some members than in others.

“Genetic weakness can put a child at risk for autism origin,” he said. The neurological distortions attributable to SSRIs plausibly add to the child’s neurological burdens. We think that SSRIs may thereby increase the risks of ASD. In any event, further study in child populations should determine if this is or is not the case.”

“In this study, we eliminated as many external factors as possible. But real-life situations are much more complex,” he said.

Stress hormones – which affect the same neurological systems as SSRIs – can also be detrimental to a developing baby, Simpson said, indicating another significant difference between the laboratory study and real-life situations.

“We intentionally looked for treatment effects in groups of rats that were considered normal at the beginning of the study and were birthed from normal mothers. The effects of SSRIs on babies carried by depressed mothers are not known,” she said.

“We need to know which one causes minimal damage but also at what dose, for how long and at what points in pregnancy. So basically, we still have a lot to learn,” he said.

He credited a multidisciplinary team of investigators for the work.

“This kind of work could never have been done in one lab,” Lin said. “It’s absolutely the result of a team approach that took people in pediatrics, pharmacology, neurobiology and anatomical sciences, psychiatry, physiology and otolaryngology.”